Unless you’ve had your head in the sand the last several weeks, you know the war in Ukraine began last month.

It’s going to affect your daily life… portfolio… even what you stock in your pantry.

The London Metal Exchange (LME) was forced to halt trading in nickel and said it would cancel trades as prices doubled to more than $100,000 per tonne on Tuesday, a surge sources blamed on short covering by one of the world’s top producers.

All of this plays into what we see going forward with inflation, which reached 7.5% last month – the highest reading in 40 years.

However, for years we’ve said one of the best ways to hedge against inflation is through precious metals.

As of today, the benchmark S&P 500 Index is down almost 12% so far this year. The Dow Jones Industrial Index is off almost 9%. Much of this has to do with supply chain issues and inflation fears.

On the other hand, gold is up over 9% to start the year. Silver is up over 10%. That’s what we would expect when inflation is running hot.

Both gold and silver are “safe havens.” That means investors prefer them to high-risk investments when volatility spikes or inflation is rampant. The same is true when there’s “blood in the streets.”

We don’t know how and when this conflict will end. But we do know that wars are typically inflationary. If things continue for a while, we could see inflation inch higher.

At the same time, we could see this become an excuse for the Federal Reserve to shift interest rate plans. That would add fuel to the inflationary fire.

In other words, we see a lot of catalysts for these two metals in the months ahead. So if you haven’t considered owning gold and silver, now may be a good time to start. You can go right here to learn more.

Yet… not only “household name” commodities like oil, gold, and silver are going up based on inflation and the Russia-Ukraine war…

This Niche Commodity Is Sending Food Prices Up

Palladium, for example, is suffering. Russia mines 40% of the world’s supply… but it can’t get shipments out.

And then there’s fertilizer.

If you’re ready to stop reading now… I don’t blame you. Fertilizer is not a sexy market or topic.

But fertilizer is a key input in our food and our coffee. And it’s in very strong demand.

That’s the largest increase since 2011. 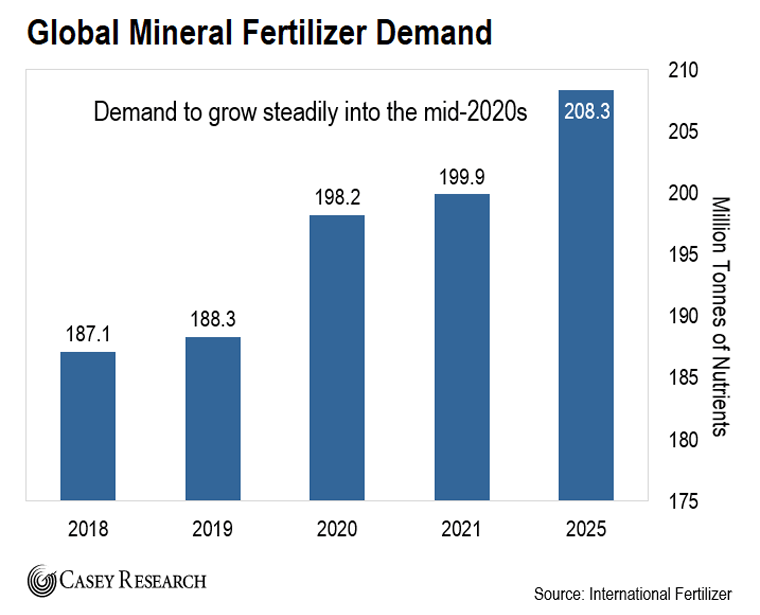 Farmers in Brazil, the world’s top fertilizer importer, are rushing to secure crop nutrients as the Russian attack on Ukraine spreads fears of a global shortage.

Why are farmers in Brazil fearful? Because Russia is a key supplier of fertilizer.

So, with the war comes a supply crunch that’s pushing prices higher.

And that’s on the back of Russia and China banning fertilizer exports last year. Their reason was to ensure there’s enough domestic supply.

Both countries say they’ll lift the export bans this year. We’re not so sure. They can easily change their minds, especially with the current tensions around Ukraine.

But it’s not just Russia and China…

Sanctions and trade disputes with Belarus are also adding fuel to the fire.

Belarus is the third-largest producer of potash in the world. It accounts for about 18% of global production. 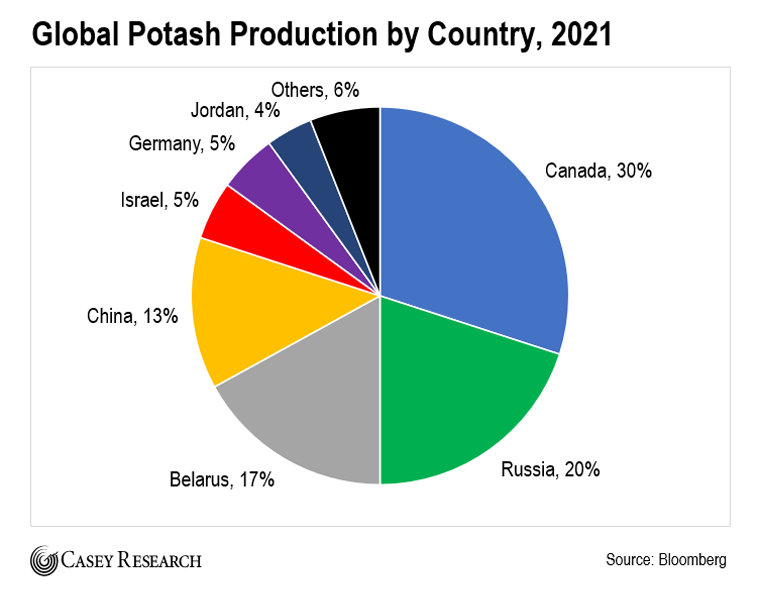 Last year, the U.S. and Europe put sanctions on Belarus following the abduction of dissident Roman Protasevich. As part of the sanctions, Belarus can’t trade in U.S. dollars.

For a country like Belarus, that creates a major problem. When most transactions settle in U.S. dollars, this takes away a major source of revenue.

That means the world’s third-largest potash producer can’t sell to its usual customers. That includes China, which relies on Belarus for about 20% of its potash imports.

Belarus is looking for ways to keep the potash flowing, so they’re switching to Russian ports, according to Reuters. The problem is it’s still unclear if they’ll be able to ship the same volume as before.

So while fertilizer prices are near all-time highs, these supply chain disruptions will also push prices higher.

And in North America, fertilizer prices look like this: 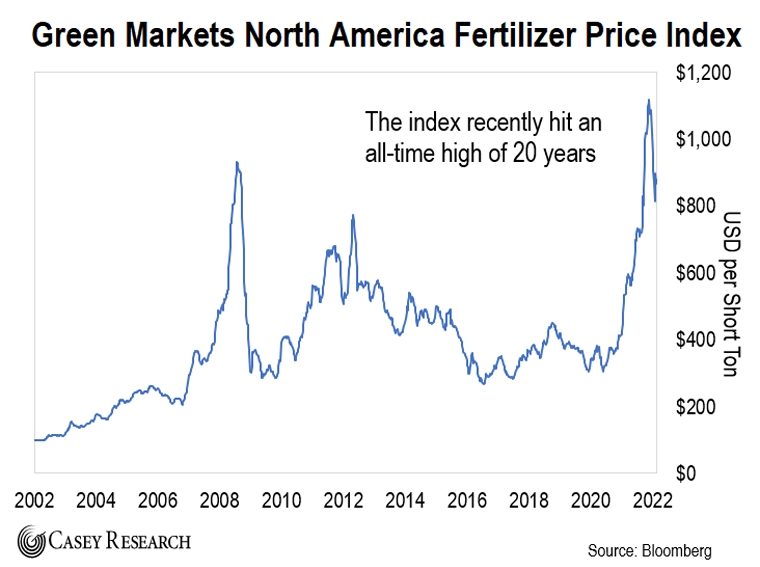 As you can see, prices are moving in an upward trend, hitting an all-time high of 20 years.

What This Means for You

Ultimately, the Russia-Ukraine conflict and global supply crunch mean one thing: the price of your food and other products you rely on every day will keep going up.

We recommend taking several steps to get ahead of these shortages and price hikes.

I recently put together a presentation to show you how to protect your wealth… your family… and how to stay ahead of everyone during this time.

Check it out right here.

Remember those Brazilian farmers paying extra for fertilizer? Those costs will get passed along to you – the consumer.

So buy some extra bags of coffee the next time you go shopping. You’ll thank us later.