The world is facing a food crisis.

Rising energy prices are one major reason. And the war in Ukraine isn’t letting up anytime soon. It’s showing how fragile food supply chains are today. They can easily break down and expose millions of people to soaring prices and food insecurity.

By June 2022, the number of food insecure people – whose access to food is restricted to the point that their livelihoods are at risk – increased to 345 million in 82 countries, according to the World Food Programme (WFP). This compares to 135 million people in 53 countries pre-pandemic.

Part of the increased costs has to do with the fertilizer markets… which are significantly impacted by supply-chain troubles.

Today, I’ll discuss why we’re seeing shortages in fertilizer – a major agricultural product… and how you can protect yourself from surging food costs.

Two of the Largest Potash-Producing Countries

That was the warning U.N. Secretary General Antonio Guterres gave recently. Guterres was in Odessa, Ukraine to witness the reopening of the Black Sea port. It’s one of the most important ports for food shipments in the world.

As I said above, the war between Russia and Ukraine isn’t ending anytime soon. And it’s having a major impact on the world’s fertilizer markets.

The reason? Russia and Belarus are two of the largest potash-producing countries in the world. 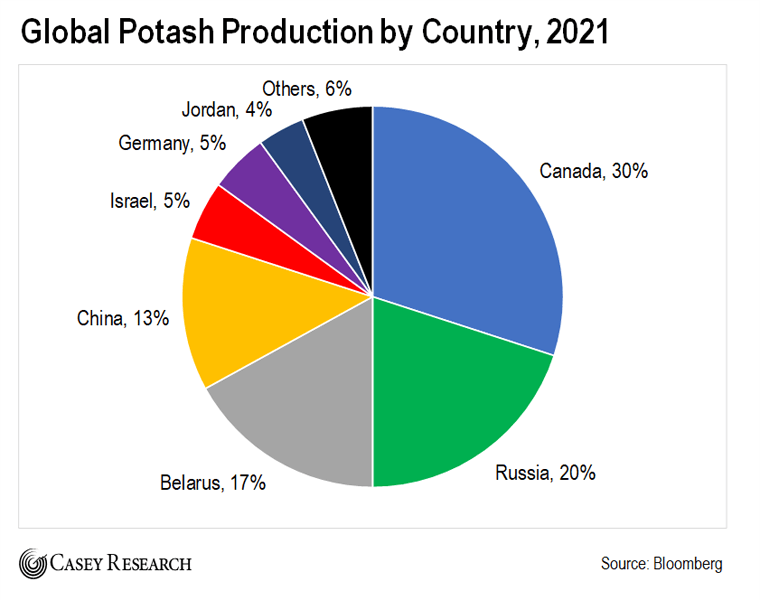 Potash is a potassium-based chemical. It’s one of the main ingredients for modern fertilizers.

Last year, Russia and Belarus accounted for about 40% of worldwide potash exports.

However, Western sanctions on Russia and Russian ally Belarus are disrupting shipments of potash around the globe. How long that lost supply will be offline is anyone’s guess.

A Recipe for Skyrocketing Prices

That’s causing prices for fertilizer to rocket higher in the face of strong demand.

According to the International Fertilizer Association, global fertilizer use rose 5.2% last year to 198.2 million metric tons. That’s the largest increase since 2011.

They expect that number to continue heading higher. 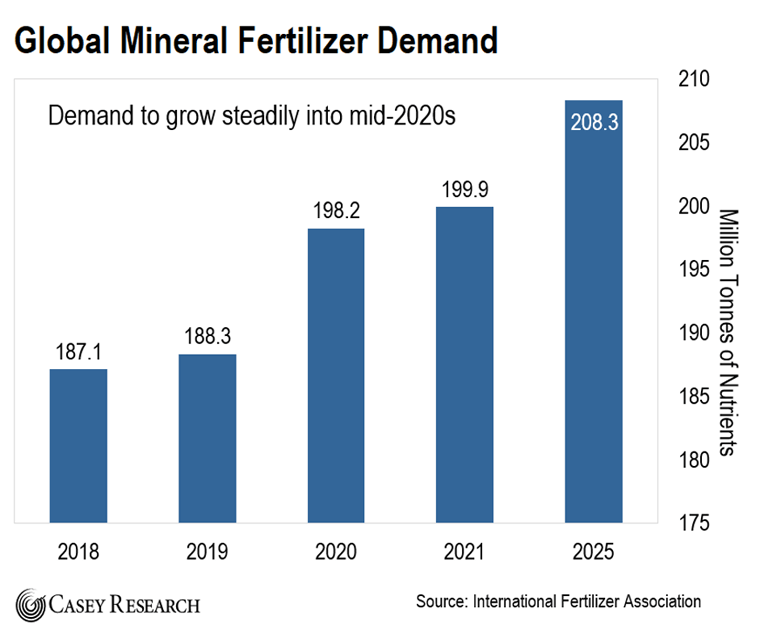 Yet, the war in Ukraine is causing a supply crunch.

In most years, the potash market is steady. It doesn’t often see huge swings.

But for 2022, the industry expects shipments to drop more than 10% – a shock to the system.

Strong demand amid a shrinking supply is the perfect recipe for higher prices. For example, since August of 2018, the price of potash has increased by about 139%.

But when it comes to rising costs, there’s another contributing factor besides strong demand and low supply. And it has to do with expensive energy…

Another type of fertilizer that’s important for world food production is nitrogen fertilizer. But it’s facing a major problem today…

Take a look at the chart below. It shows the price of natural gas in different parts of the world. 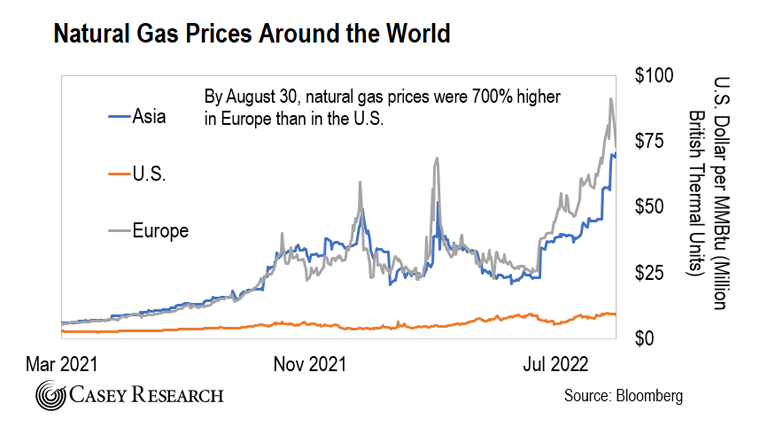 The U.S. is stable. That’s because it has an abundance of oil and gas. So having enough supply isn’t a problem.

Contrast that with Europe, which relies on imports of natural gas to feed its energy needs. Much of Europe’s natural gas comes from Russia. And while gas is still flowing to Europe from Russia, it’s not nearly close to what Europe needs to keep the lights on.

Where natural gas comes into play is to produce ammonia, a key component of nitrogen fertilizer.

Nitrogen fertilizers are essential for healthy crop growth and reproduction. According to Our World in Data, it supports about half of the world’s population.

Yet, power prices surging across Europe are throwing a wrench in that supply… and making production of nitrogen fertilizer there nearly impossible.

According to industry research firm CRU Group, natural gas price spikes are causing about half of Europe’s ammonia production to shut down. It’s also forcing about a third of nitrogen fertilizer facilities to close or curb production.

Today, it’s cheaper for Europe to import these materials than it is to make them.

So if energy prices don’t fall significantly, it threatens the rest of European ammonia and nitrogen fertilizer production.

How to Play the Food Crisis

In the game of commodities, the low-cost producer typically has an advantage over rivals. Most commodity producers are price-takers. They typically don’t sell their product over what the current market price allows.

So they make up for that in the cost to produce their product.

That’s why right now, producers of fertilizer with lower-cost access stand to benefit… which is also why it’s probably best to focus on producers in North America.

For instance, Illinois-based CF Industries (CF) is a large producer of nitrogen fertilizers. It has 17 ammonia plants worldwide. And it’s seeing record revenue with surging fertilizer prices, just like many of its peers.

Plus, with a P/E ratio of 7 and a dividend yield of 1.6%, it’s giving investors a measure of safety.

Now keep in mind, I’m not recommending CF Industries. I’m just highlighting it as a large, North American player like I mentioned above.

However, just as important as finding the right fertilizer companies to target is avoiding ones that are struggling. That includes Norway’s Yara International (YARIY), which recently cut its ammonia production utilization to 35%.

When rising energy prices force you to shut down, it opens the door for lower-cost rivals to pick up market share.

And in the most recent issue of Strategic Investor, we recommended a leading producer of fertilizer that can help close the gap from Europe’s decreased supply. (Paid subscribers can catch up here).

As I said above, low-cost producers have an advantage. They’ll profit from the current boom in fertilizer… and they can help protect your portfolio against surging costs and the developing food crisis.