“I don’t buy anything from Amazon anymore. I buy everything from AliExpress now. It takes two months to get here, but I save about $1.”

My friend Canset told me this recently. Now, you might be wondering why she’s using AliExpress—an online retail service based in China—to purchase her everyday items.

She’s doing this because the money in her wallet is losing value rapidly.

You see, my friend lives in Turkey, which is in the middle of a currency crisis.

Of course, you’d already know that if you have been reading the Dispatch. I wrote about the situation here and here. It’s a major story we’re following closely—and it’s another reason why you should bet on cryptocurrencies today.

I’ll explain why in a moment, but first let me recap what’s happening in Turkey.

This year the lira has fallen 38% against the dollar.

That’s a staggering decline. Only the Venezuelan bolívar and Sudanese pound have fared worse this year.

This is why my friend is changing how she shops. If she doesn’t, she could run out of money.

She’s certainly not alone, either.

People all over Turkey are under pressure. You can almost feel the tension in the air.

That was enough time for me to truly experience Turkey’s currency crisis.

Now, I didn’t mind this as a tourist. Everything from meals to cab rides got cheaper by the day.

But the lira’s plunge hammered everyday Turkish people, like my friend.

Two weeks ago, it announced a series of measures that it hopes will bring liquidity and support the country’s banking system. (You can read more details on these measures in this Dispatch.)

If there are dollars under your pillow, take these out… immediately give these to the banks and convert to Turkish lira and, by doing this, we fight this war of independence and the future.

In other words, Erdoğan wanted Turks to sell dollars to keep the lira from plunging.

But many people did the exact opposite. In fact, my Turkish friend told me—at the height of the lira’s sell-off—that “all her friends were exchanging lira for dollars.”

But that’s not all they were buying.

We know this because trading volumes on major Turkish crypto exchanges surged during the lira’s recent crash.

According to CoinMarketCap, trading volumes on BTCTurk soared 131% when the lira was falling. Paribu, another Turkish crypto exchange, saw a 108% spike in trading volume.

This tells us many Turkish people took shelter in bitcoin and other cryptos. But that shouldn’t come as a surprise.

In fact, the market research firm Ipsos recently conducted a survey on crypto ownership across 15 countries. And it found that 18% of Turks own some form of cryptocurrency. That’s double the European average of 9%.

That’s impressive. But crypto ownership in Turkey should keep rising.

I say that because the same survey found that 53% of Turks believe digital currencies will be the dominant online payment method in the future. And 51% expect the value of cryptocurrencies to rise over the next year.

Of course, skeptics will be quick to point out that bitcoin hasn’t been a good store of value this year.

It’s down 52% on the year versus the lira’s 38% decline. Not only that, many lesser-known cryptos are down 80% or more this year.

I won’t dispute those numbers. But let’s not forget that cryptos are coming off an incredible rally.

The bitcoin chart below says it all. 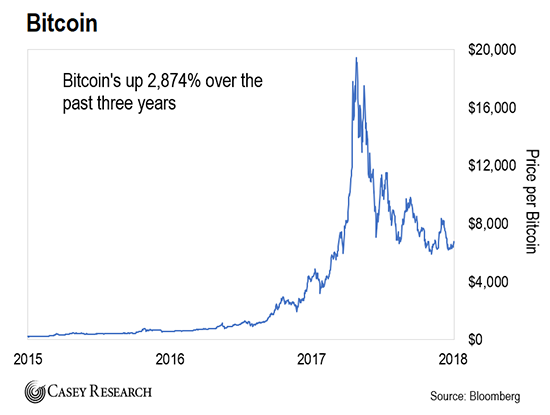 You can see that bitcoin’s still up 2,874% over the past three years. And yes, that includes its recent crash.

You’ve also got to remember that bitcoin’s been here before. You see, bitcoin has crashed 30% or more 11 other times since 2010. Each time, it bounced back stronger.

You can’t say the same about the lira, which has been in steady decline. In fact, it’s lost 70% of its value against the dollar since the start of 2013. 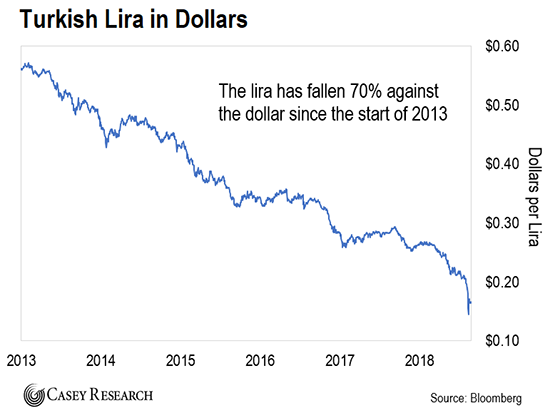 Relative to the dollar, the Venezuela bolívar has lost 99.99% of its value this year. The Argentine peso is down 40% on the year. The South African rand is down 12%.

These are enormous declines. They’re the kind that push people to take shelter in bitcoin.

But together they could light a serious fire under the bitcoin price.
It’s also possible that bitcoin (or some other crypto) could emerge as a medium of exchange in one of these places.

That would let the world know that cryptos aren’t just another speculative vehicle. They’re a legitimate threat to paper money.

So consider speculating on cryptos if you haven’t yet. Bitcoin is a good place to start.

Just remember that bitcoin and other cryptos are extremely volatile. As always, never bet more money than you can afford to lose. And you should use stop losses and take profits as they come.

Today, we see that not everyone agrees with Doug Casey’s take on the Alex Jones ban…

Doug, you have gotten completely off topic with Alex Jones. All you say, and others as well, about Jones’ content and his delivery is correct. But ask yourself this question: How did this cabal all of a sudden come together? All of a sudden the technocrats and the media in unison attacked Jones. Feel sorry for Jones… NOT! As of Monday, he was the No. 1 news app. CNN, who had held that title for years, was destroyed. Why? Because you and the public jumped on his band wagon. Jones is a gate keeper for the Israeli agenda… and where did you get this that he was somehow a 9/11 truther?

You need to re-examine your information, Mr. Casey. He argues all of the time whether the narrative was wrong and Israel was a haymaker of this false flag agenda. This was not to destroy Jones, as you and others portend. It was to drive the insouciant to his site to take the alt net to its extreme. Please take a different look to see what he has been and still is. You are as dead wrong as all who have fallen for the scam of the century.

Have you seen these strange-looking metal poles in your city?

Most people have no idea what they’re for. But in just a few short years, these towers could completely upend the entire $479 billion smartphone industry… and make well-positioned investors rich. 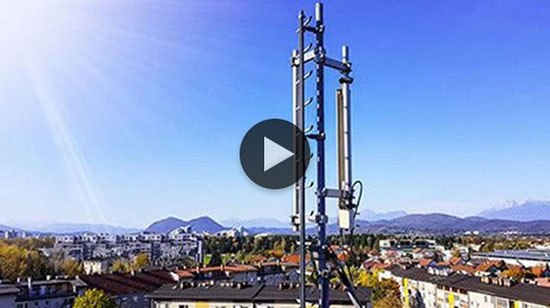