Rachel’s note: Here at the Dispatch, we encourage gold and bitcoin as inflation hedges and wealth protection. In fact, this is chief analyst Nick Giambruno’s specialty…

(To learn how to protect yourself from the government’s tendency to inflate away your savings, check out his briefing here.)

And today, we’re bringing you one of Legacy Research cofounder Bill Bonner’s masterful looks at the world – and the terrible currency situation…

Final Day of the Quarantine

SAN MARTIN, ARGENTINA – Marta works for us at our house at the ranch. She comes down from her mountain puesto (outpost) on foot, a hike of about six hours.

She and her family are about as unsophisticated about money as anyone in Christendom. They live in a mud house, with a dirt floor and no microwave nor washing machine.

Their hands are as hard as boot leather. They get no newspapers. They see no TV. They are not readers of the Diary.

But even Marta is hip to the dangers of inflation.

“Could you change pesos for dollars?” she asked on Saturday.

You know you are near the end of a stock market bubble when taxi drivers begin giving you stock tips. But where are you when subsistence farmers high in the windswept Andes begin to trade currencies?

Marta’s father, Martin, has saved 300,000 pesos – accumulated over a lifetime of hard work. His pile, in a single stack of bills, measures more than a foot high. 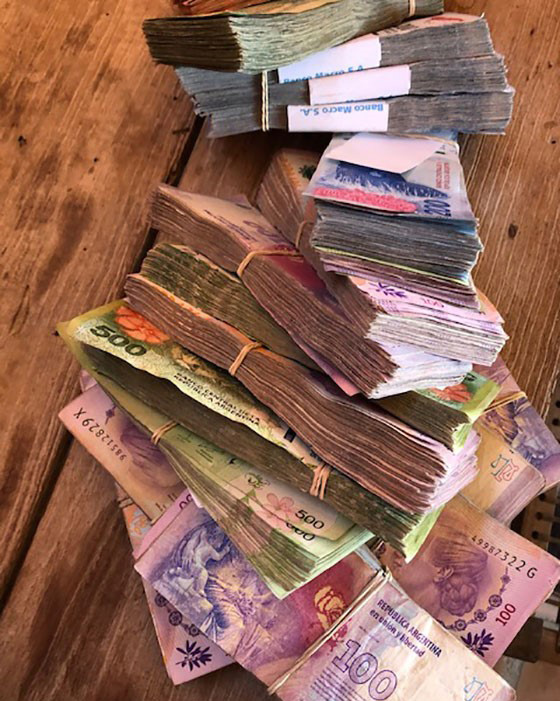 A lot of smackers

At today’s black market exchange rate, it is worth about $2,000.

But if Martin keeps this money in a lumpy mattress, it could soon be worthless. A lifetime of savings – poof!

He has no bank account. He has no credit card. He has nothing other than a wad of cash… and no easy way to protect himself against Argentina’s currency debasement.

Inflation in Argentina is running at about 50% per year. The country has been strictly locked down in an attempt either to stop the coronavirus… or to provide an excuse for the developing economic disaster.

In either case, the shutdown seems to have accomplished little – the coronavirus death rate is about the same here as in the U.S. And the economic crisis has gotten worse.

The post-1971 dollar has already lost 96% of its value, in terms of gold. In the years ahead, it will almost surely lose the rest of it.

But last week, America’s investors were sans souci. The Dow leapt to absurdity, coming to rest only 50 points shy of 30,000 – a new record.

First, there was more “good news” about a coronavirus vaccine. According to the popular narrative, the economy will soon get a shot in the arm and life will return to normal.

Businesses have had the life crushed out of them. Jobs have been permanently lost. Habits have changed. States are telling families not to get together for Thanksgiving. Santa is shopping for a face-protector.

The second reason is even more absurd.

Now that Sleepy Joe Biden is packing up for his move into the White House, investors expect the fake money to flow as promiscuously as it did under Trump. There may even be more of it.

Nancy Pelosi and Chuck Schumer announced earlier this month that their last proposal – $3.4 trillion of additional fake money – was now just a “starting point.” Is this “normal?”

And the Federal Reserve is “printing” new money – debasing its own currency – at the rate of $11 billion per day. Is that “normal?”

And the weak link in this freakish chain is the U.S. dollar. The feds can print ‘em. But they can’t control their value.

COVID-19, along with lockdowns and lockups, have caused people to be fearful. Savings rates have gone up. The velocity of money – a key to the value of the dollar – went down sharply… exaggerating a trend that has been going on for almost a quarter of a century.

Consumer spending, meanwhile, went up – thanks to the feds’ excessive giveaways. Economists, naturally, mistook this spending for “growth”… and a “recovery.”

But it was nothing of the sort. It was as fake as the whole shebang. The recovery… the dollar… interest rates… stimulus – all phony baloney.

But wait… what’s this? The St. Louis Fed reports that the “velocity” of money – the rate at which money changes hands – has suddenly turned up.

Is it a blip? Or a trend? Nothing worth mentioning? Or time to high-tail it out of town?

We don’t know. But the smart money is selling dollars. Here’s Zero Hedge:

In a Friday note from Goldman’s chief FX strategist Zach Pandal, he predicts that “depreciation in the broad Dollar can continue in 2021” and writes that his USD cross forecasts translate into a 6% decline in the broad trade-weighted Dollar index over the next 12 months, and a “sustained but orderly” 15% real depreciation from its 2020 peak to the end of 2024.

Is this the beginning of the end for the fake dollar… the fake interest rates… the fake stimulus… the fake bailouts… the fake recovery… the fake stock market boom… and all the rest of the fakiness?

It is too early to tell.

In the meantime, let us finish our story of the asado we held at the weekend to bid our friends and neighbors goodbye.

A sheep had been slaughtered on Saturday… By 9 in the morning on Sunday, it was roasting on an open fire, its legs stretched out as if crucified.

It is rare to eat a sheep. Typically, we eat a cordero (a male lamb). Sheep reproduce; we don’t like to give them up.

“This sheep was sterile,” explained the foreman. “She wouldn’t lamb.”

We began the lunch with a toast… a “thank you” from Don Bill… followed by a blessing. We all crossed ourselves and sat down to eat, our seven cowboys along with their families.

The cowboys and your editor sat at the head table. The women and children sat at another…

Even Samuel was there. 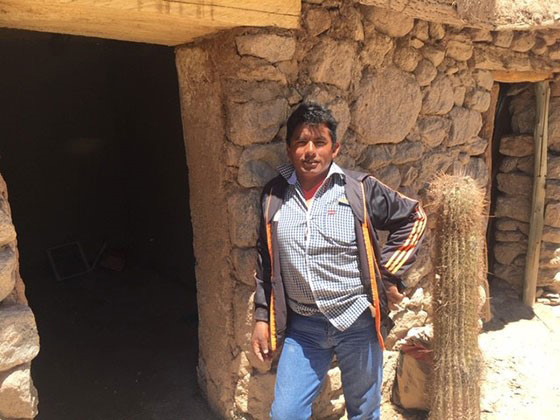 Samuel was thrown from a mule last week. He was still seeing double when we visited him in the local clinic. He described what happened next:

“They took me up to Salta and put me in a machine to look at my head. They didn’t find anything, so they brought me back yesterday. I’m fine.”

“How many fingers am I holding up?” we asked him. “Just checking.”

“Four,” he replied, smiling (we only had two in the air).

An asado is no place for a vegetarian. It begins with meat… and then the meat continues… fresh off the grill, for at least an hour.

First come the sausages. Then comes the beef. Then the mutton. And then the sausages again… all hot and dripping with grease.

The grease was cut with a lavish flow of our own wine… as well as Coca-Cola. Sometimes, the locals mix the wine and Coca-Cola together to make a “South American cocktail.”

At first, the cowboys are timid in front of Don Bill and La Señora. But after a few courses of meat… and a few bottles of wine… the conversation becomes looser and faster.

“Hey Samuel,” said Javier across the table. “They took a look inside your head and didn’t find anything. That’s what I thought.”

“I told them they were wasting their time,” Samuel replied, playing the straight man.

He took out his phone, as if it had rung.

“This must be that cute little nurse at the hospital. She said she didn’t want me to leave.”

“Yeah,” replied Javier. “In the city, they don’t get many people who fall off mules.

“We’re going to need more safety precautions around here,” Javier continued. “Samuel is going to have to wear a helmet when he rides a mule. ”

“And a seat belt,” said one of the others.

They were enjoying themselves. But the looser the conversation became, the harder it was for the gringo to understand it. They were using their mountain slang… incomprehensible to an outsider.

Meanwhile, Elizabeth was doing the serious work. Sitting with the women, she was getting the low-down on what was going on.

The people of the ranch are remarkably hard and tough. But they often find it difficult to synchronize with the outside world. One of them described what it was like for her when she left the ranch for the first time, aged 15, to go to school in the city.

“It was such a shock. I didn’t understand anything. I didn’t know how to cross a road. I’d never seen running water – in the house. Electric lights. Automobiles. TV. It was all new to me.

“At first, I wanted to come back to the ranch. It all scared me. I felt alone. Nothing was familiar to me. I was with girls who had never seen a live cow. They thought beef came from the supermarket. And they laughed at me because of the way I talked.”

Those who leave for the city quickly become hip to modern life. But those left behind often need help.

“They told me about Camilla,” Elizabeth explained later.

“You remember… she had a baby. She’s only 18, but she had a baby. And then, she couldn’t walk. They didn’t know what was wrong with her, so they took her to the clinic. And the doctor there sent her up to Salta.

“They discovered that she has a tumor on her backbone. They’re testing now and deciding what to do.

“But she’s in the hospital, with no family to look out for her. And they took the baby away, because she couldn’t take care of it. They didn’t seem to know what they were going to do with the baby.

“The poor girl is up there… She really needs her mother. But I think the mother is afraid to go up to the city. She doesn’t know where she would stay… or what to do there.

“I told her that we could take her up there and rent a little apartment on AirBnb… or something. We could figure it out. But I think she’s just terrified by the idea.”

“I’ll go to visit Camilla, before we go to the airport,” Elizabeth offered. “If they let me into the hospital.”