Stocks are at a record high.

There are shortages everywhere – including in the workforce.

And interest rates are down.

Are those good things for investors?

Or is it a cause for worry?

In other words, should we put our “crash alert” on high? Or, as MarketWatch claims, could this mean that the current bull market has five more years to run?

What’s an investor to do?

Today, the age-old question: will the market go up or down?

According to MarketWatch, there are six reasons why the market will keep going up, up, up. In order, they are:

Of course, as we say, there are only ever two reasons for stocks going up or down – earnings and interest rates.

If you need further proof, we can just look at MarketWatch’s six reasons. When you boil them down, the first, second, and fifth reasons are really about earnings.

The third and fourth reasons are really about interest rates. And the sixth reason covers both.

Look, we know we keep going on about it. But it’s important. That’s because it helps to remove all the “noise” that some experts like to put into the market.

If you think that every single news story is an ultimate reason for why the market goes up or down, it will just confuse you. You’ll end up not doing anything when it comes to investing…

It becomes what some people refer to as “paralysis by analysis.” You end up looking at so much detail that rather than making useful investment decisions, you end up doing nothing.

Don’t do that. Look at the bigger picture… the real reasons for what moves stocks (remember, there are only two!). When you do that, it should all become much clearer for you.

Now let’s get into the details.

Two Reasons Why Stocks Are Heading Up

The two main reasons for stocks going up or down are interest rates and earnings.

Even if inflation stays high, is it likely the Federal Reserve will increase rates to slow things down? No.

The Fed has already seen what happens when it did so in 2018. The market didn’t like it at all. Stocks fell.

So the Fed cut rates, and pretty much put them back to where they were before.

That means the only “tool” the Fed has left when it comes to rates is to make all the right noises about raising rates if inflation goes too high. But the Fed wants higher inflation… because it helps the government meet its debt obligations.

Unless inflation goes into the higher single-digits, don’t expect anything to change.

The bottom line on that is: don’t expect interest rates to stop the market from going up.

But what about earnings?

It seems to us that companies have some control over pricing. Yes, inflation is pushing up prices, but for now, customers are paying. 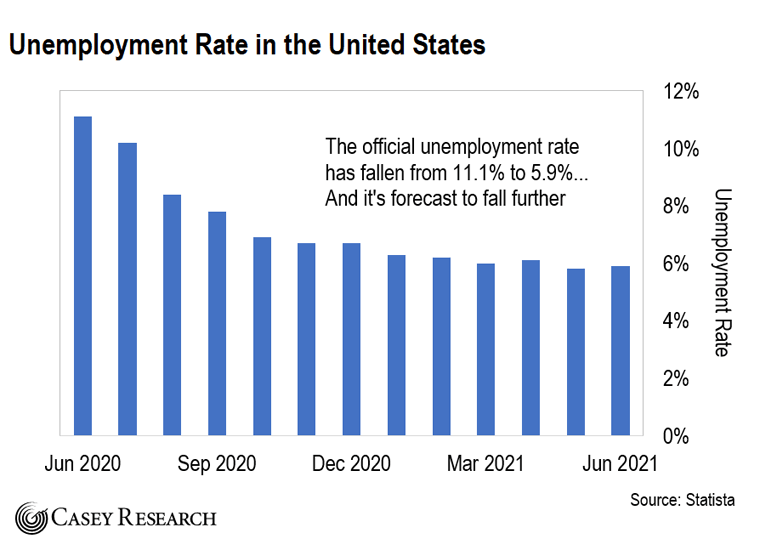 Forecasts predict it will go lower. According to the Bureau of Labor Statistics, the unemployment rate fell to 4% in 2000, and 4.6% in 2008. In which case, if history repeats, there’s still much further for the rate to fall.

Of course, that doesn’t mean to say the boom will last forever.

Don’t Give Up on This Bull Market Just Yet

Remember that more recently, in 2019, the unemployment rate fell below 4%. President Trump wasn’t shy about reminding everyone that he had helped build the world’s greatest economy.

And the current boom won’t last forever, either.

However, the biggest mistake is to try to play for a crash… and then wait on the sidelines for it to happen.

That’s a mistake because it can take years for a crash to play out.

Instead, the better option is to deal with risks in other ways.

And that should mean higher stock prices. Of course, nothing is guaranteed. That’s why – aside from using stocks – we like the method that investing expert Dave Forest uses to help investors manage their risk in the market.

Most investors have never heard of [warrants]. But they’re commonly known in the financial community. And in fact, their potential is so explosive they’re used by some of the world’s most prominent investors… including Warren Buffett.

Warrants can be extremely powerful. And you can access them from most brokerage accounts.

The best thing about warrants is the built-in leverage. Instead of investing the usual amount that you’d invest in the stock, you can invest a smaller amount in the warrant and still make the same – or often better – return.

Then you take the cash you have left over and invest that more conservatively. Maybe you even just leave it in the bank.

To our way of thinking, warrants truly can give you the best of both worlds. If it turns out stocks are heading for a fall, you’ll have much less of your capital at risk.

But if the market bulls are right, and stocks go up for another five years, allocating a relatively small amount of your investments to warrants means you won’t miss out on those gains.

It’s a terrific way to invest. To get the full lowdown on investing in warrants, go right here.