For the first time in a century, we’re seeing world-altering industrial changes unfolding in the U.S…

Just look at all the new megatrends sweeping America: advanced 5G communications, the Internet of Things, artificial intelligence, and robotics.

But what most people are missing is that these innovations will require a new wave of materials to “fuel” them.

Take one of the biggest unfolding trends today, the electric vehicle (EV) revolution, which you’ve undoubtedly heard about.

Analysts estimate that in about another 15 years, over half of all vehicles sold worldwide will be electric. And because EVs use batteries, they require a different kind of fuel than gasoline.

I’m convinced this will reignite interest in a long-neglected industry in America… and trigger a wave of new fortunes. Smart investors are already positioning themselves to profit.

No Longer Made in America

The manufacturing of EV batteries requires a variety of critical metals. But many of these metals are either not produced in the U.S. anymore, or they’re in short supply. Right now, even as EVs surge, companies have to look abroad for the resources that power them.

One of these metals is cobalt, a key element needed to make the cathodes in EV batteries.

Currently, the world’s go-to supplier for cobalt is the Democratic Republic of Congo. Today, Congolese mines supply over 70% of all the cobalt on Earth. The next-largest producing nation, Russia, puts out just 4%.

It’s just geology. The Congo’s cobalt comes bound up with valuable copper metal. Profits from copper help produce associated cobalt that might not be otherwise economic. That means cobalt users are – largely – stuck buying from the Congo.

But the Congo is a contentious supplier. There are allegations of child labor, inhumane working conditions, and rampant corruption.

EV makers like Tesla are supposed saviors of the planet. So associating with child labor is decidedly off-brand. It’s going to be hard for Tesla and other manufacturers to continue to hang their hat on supply from this region.

Elon Musk has tried to address the cobalt conundrum. Last month, reports surfaced that Tesla has hit on a cobalt-free battery design. But this is still in the research and development stage – and so far, it’s only slated for China.

For current vehicle production in the U.S. and elsewhere, cobalt is still a must. But there are only two cobalt mines in America: The Eagle mine in Michigan, and a minor production facility in Missouri that just launched last year.

And cobalt is just one of several critical metals needed to fuel EV batteries. And it’s not the only material mined in risky, far-flung regions that aren’t go-to investment destinations.

Lithium is the most critical element Tesla needs to power its electric vehicles. For example, a Tesla Model S needs about 140 pounds of the metal.

Currently, most of the world’s lithium supply comes from just a few countries, like Australia, China, and Chile. 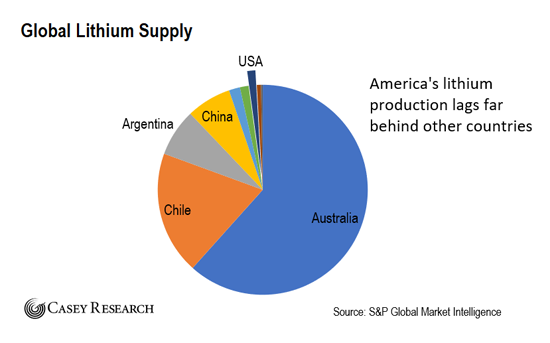 And homegrown supply of lithium is worse than cobalt. There’s only one lithium mine in America.

A Shot in the Arm for an Old-World Industry

As the EV revolution ramps up, supply will tighten. Tesla and other companies will need to look for new sources of lithium, cobalt, and other metals. Musk has already indicated he’s looking to get more of Tesla’s critical metal supply from the U.S.

That’s why I believe this is such a lucrative opportunity right now. America is one of the biggest markets on the planet for EV sales, but there are only a handful of companies positioned to feed the enormous need for lithium, cobalt, and other metals in EV manufacturing.

I believe this will act as a massive push to restart mining of critical tech metals in the U.S.

In fact, we’re already seeing part of this trend unfold. For example, the biggest shot in the arm looks to be a new cobalt mine in Idaho that’s underway. I’ve covered its junior development company for a few years now in my International Speculator advisory. Final technical studies just launched, along with negotiations for project finance.

It’s not just cobalt. Mining companies are moving to open new supplies of other battery metals, like lithium, nickel, vanadium, and manganese.

Mining on U.S. soil is clearly a real possibility, and would provide Tesla with a much-needed supply of metals.

This isn’t a trend many people are aware of yet. Most U.S. investors still see mining as an outdated, old-world industry.

But with world-changing technologies like electric vehicles coming on strong, mining for critical metals in America is anything but outdated.

If you’re not sure how to take advantage of this trend, take a look at the Global X Lithium & Battery Tech ETF (LIT). It’s a convenient one-stop shopping tool that holds a number of lithium miners and battery producers. As lithium demand grows and supply runs short, this ETF should climb higher.

Just remember to position size your stake appropriately. And never invest more than you can afford to lose.

P.S. As I mentioned above, lithium is a critical metal needed to power the electric vehicle revolution. And I’ve found a tiny company mining a supply… right here in the U.S. In fact, it’s on the verge of a multibillion-dollar deal with Tesla.

This deal could happen any day. And when it does, savvy investors could pocket a fortune. There’s not much time left. You can go here to find out all about this story…