Money ain’t what it used to be.

The numbers may be bigger…

And they may look more impressive…

But what you get for those bigger numbers isn’t as much as it seems.

We bring this up because… yesterday, the Senate passed a $1 trillion infrastructure bill.

The claim is that it will help stimulate the economy.

But will it? How far will one trillion dollars stretch?

Turns out, not far at all…

We do this by explaining the real stories behind some of the headlines you’ll read in the mainstream press. But that isn’t where it ends…

We take those stories and ideas, then showcase some of the solutions offered by our in-house investing experts: Nick Giambruno and Dave Forest. And from the founder of our business, Doug Casey.

The big headlines on yesterday’s infrastructure story are a classic example of the mainstream missing the big picture. We’ll explain more below.

The Trillion-Dollar Bill That Isn’t

The Senate passed a roughly $1 trillion infrastructure package with broad bipartisan support Tuesday, advancing a central piece of President Biden’s economic agenda that would amount to one of the most substantial federal investments in roads, bridges and rail in decades…

And if you’re the type (at Casey Research, we are not the type) that thinks more government spending is good… it’s a number that will thrill.

After all, the more stimulus the better.

More money in the system means more consumer and business spending, higher asset prices… and a postponement of the inevitable “day of reckoning.”

But how much is it? And will it really make much difference?

For a start, it’s not really $1 trillion. As the Journal notes, $450 billion of the spending is already factored into the government’s spending budget. So it’s not “new” money.

That’s the amount the government says it will spend on the type of things most folks associate with infrastructure: roads, bridges, rail, and other transit plans.

It’s Not What It Seems, But There Will Be Winners

To put the bill into further perspective, you can assume this spending will happen over several years. If we assume 10 years, you’re looking at just under $22 billion per year in extra spending.

Considering the federal budget for 2022 will be $6 trillion… the actual infrastructure spending number (as opposed to the headline-grabbing number) will account for just 0.4% of the government’s budget.

In terms of total GDP (gross domestic product), the spending accounts for just 0.1% of the economy.

It’s no wonder they emphasized $1 trillion (really just over $200 billion) in alleged spending, rather than the real impact to the economy.

The truth is, as a plan to boost or stimulate the economy, this bill isn’t all that Congress and the President would have you believe.

Don’t get us wrong. Someone will benefit from the extra spending… they always do. It’s just not likely to be an economy-wide boost that many seem to expect.

So who will benefit?

For something like this, the biggest beneficiaries will be those where the extra spending will have the biggest incremental impact. That means small-cap companies.

Think about it. An extra $20 billion in annual government spending, spread across several industries, won’t amount to much for large-cap infrastructure plays.

But for a small-cap company… in the right sector… with the right services or products… getting a slice of the new infrastructure spending could be a big deal.

That’s the bet investment expert, Dave Forest, is making right now. Back in June this year, pre-empting any kind of infrastructure bill, Dave told his subscribers about a niche player in the infrastructure sector.

The Best Way to Play the Infrastructure Bill

It’s tiny, barely raking in $225 million in revenue in 2020. But it’s the perfect play and the perfect company to capitalize on increased infrastructure spending.

Since Dave profiled the company in June, the stock price is up 11%. It was up over 4% alone yesterday, no doubt on the infrastructure bill news. But Dave didn’t recommend the stock.

Dave’s preferred way to play the company’s move is by using warrants instead. The warrants have gained more than 50% over the same timeframe.

The bottom line on the infrastructure bill story is that it won’t do anything to boost the fortunes of the American economy as a whole. But what it will do (as government spending always does) is provide a boost to a select group of well-placed companies.

Those are the ones that will benefit. And those are the companies worth investing in today. For details on how to access Dave’s niche infrastructure warrants play, you can go right here.

Another Way to Play the Infrastructure Bill?

If at first you don’t succeed… try, try again.

That’s the theme for today’s edition of Chart Watch where we are revisiting the price action in crude oil.

Our last update on crude oil was on July 7, where we emphasized the importance of the $77.55 key level.

In that update, we also cautioned that it was unlikely the price would go through that level on the first try.

Since then, the price has slipped back, trading around $68. However, my analysis suggests that another run at the $77.55 key level is likely in the cards.

Let’s look at an updated price chart of crude oil below. 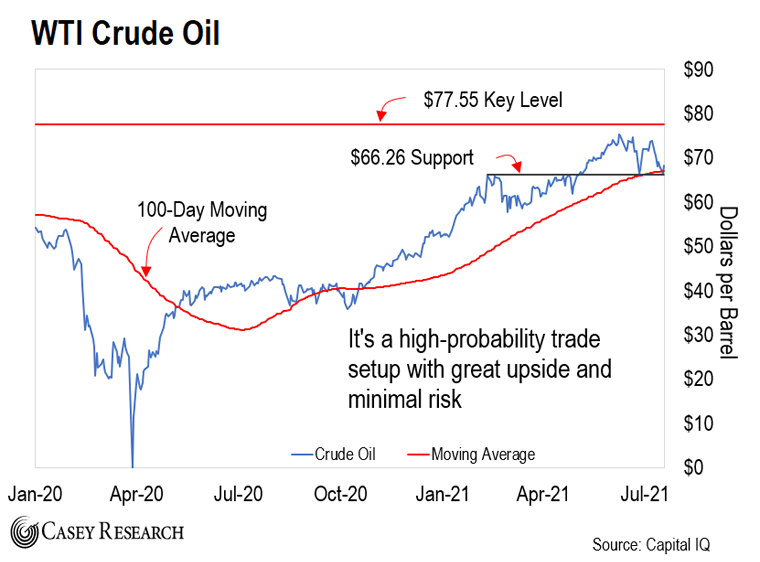 On this price chart I have outlined a key support level that comes in at $66.26.

This level previously served as resistance after oil put in a short-term top at this price back on March 8. Since then, prices have found support at this level on July 20 and once again on August 9.

Identifying key levels like $66.26 is straightforward to do – you just have to pay attention to what the market is telling you. In this instance, the market is clearly telling us that this price is important.

I have also added the 100-period moving average to the chart… it’s a very reliable trend-following indicator.

You’ll notice that the moving average currently comes in very close to the same key level of $66.26.

This is exactly the kind of setup I love to see.

When trading this price action, I can take aim at the $77.55 resistance level while using the combination of the support level and the moving average to protect my position.

This results in a very favorable risk-to-reward position, where you could gain about $3 for every $1 at risk.

This is the key to profitable short-term trading… identifying high-probability trade setups with great upside and minimal risk.