The markets have been on a wild ride lately.

…by buying a Lehman Brothers bond?

Yes, the Lehman Brothers that collapsed back in 2008…

I was as shocked to discover this as you probably are.

Before I dig into the details, let me share a surprising turn of the Lehman story you might not be aware of.

As a reminder, the collapse of Lehman Brothers, an investment bank, was one of the most remembered events of the Great Recession of 2008-2009.

An era of risk-taking that was put to an abrupt stop by the collapse of the subprime mortgage market.

With over $613 billion in debt, Lehman went on record as the largest corporate bankruptcy at the time.

But you’ll be surprised to know that almost 14 years after that date, Lehman is still around.

It’s a zombie-state company that is still paying off its pre-2008 creditors.

Almost a decade and a half after its bankruptcy, Lehman is a reminder of what could go wrong in the finance industry and what you can do to avoid catastrophic mistakes.

The market is cautious right now. It’s reassessing how much risk it’s willing to take… and how much it trusts high-risk start-ups and new business models.

It may sound like a contradiction. After all, speculation involves taking risks.

These payoffs won’t happen until you do two things, however.

And that’s my first lesson from the Lehman saga.

To profit from a risky asset, you need to diversify and place several bets.

One large, risky bet is a way to ruin. As we always remind our readers, don’t bet the farm on any single trade.

How many trades should you spread your risk over, then?

Thirty is a good rule of thumb. If you have a portfolio with more positions, it could be difficult to manage.

And there’s a theory saying that having more than 20 or 30 bets could hurt your diversification. There is even an industry slang word for it: “diworsification.”

So if you had about 30 small, high-risk bets in your portfolio, you would do better than someone with either five or 50.

Even if one of them was Lehman, your portfolio wouldn’t suffer much.

If you had spread those bets evenly and one of them went down 100% (which is the case when bankruptcy happens and equity investors are wiped out) while others retained their value, your portfolio loss would be 3.3%.

That’s why you should size your positions carefully.

As a rule of thumb, consider this: 5% for a low-risk stock or bond, 2% for a higher-risk investment, and no more than 1% of your portfolio for a speculative “moonshot.”

The Lehman story delivered a lot of surprises.

When the company collapsed, as Bloomberg reports, something interesting happened.

Some investment funds that held Lehman debt started selling it right away.

The ones on the selling side wanted to get rid of their holdings quickly. They didn’t care about getting a good price for them.

Others, with armies of lawyers on their side, bought that debt on the cheap and then proceeded to sue Lehman to extract as much money from the company as they could.

And quite a few of them were successful.

Bloomberg quotes that some European debt holders have earned over 8% on Lehman debt for over a decade.

As a reminder, the average dividend yield of the blue-chip S&P 500 index is a measly 1.4%.

Not bad for a “failed” bank.

Lesson Two: Look Through the Noise

Lesson number two… when the market crashes, like right now, you can make money by looking through the noise and buying from people rushing to sell.

Smart investors bought this 2006 Lehman bond and made a lot of money from it. 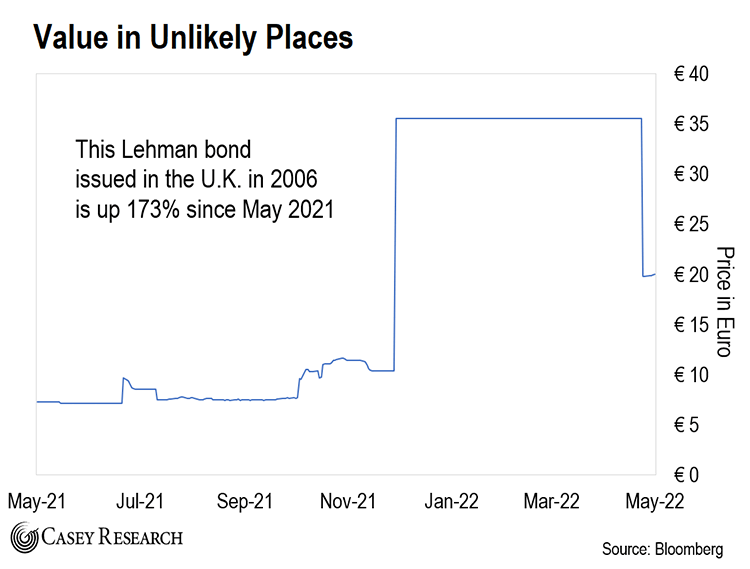 This is a striking example of how some investors discard the best opportunities… and others benefit massively from them.

Right now, most investors are fearful of the market.

They’re panicking… they don’t know what will come next.

Others are looking for opportunities… and preparing themselves for a wide range of economic scenarios.

From inflation… to recession. There’s always a way to profit if you take the right side of the trade.

How to Find the Right Side

And the readers following our guidance are doing well.

One of our picks in the fertilizer space is up 24% in less than three months.

And we have more options to choose from. You can learn more about how we’re putting together a strong portfolio to protect your wealth and profit right here.