Editor's note: Today, instead of our usual market commentary, we're featuring an eye-opening essay from Crisis Investing editor Nick Giambruno. Below, Nick explains why Donald Trump could be Herbert Hoover II…and exactly what that means for America's future.

As you'll see, what happens after Trump’s inauguration could change everything…

History books remember Herbert Hoover as one of the worst American presidents.

Hoover, a Republican, was a rich and successful businessman with investments all over the world. He was also somewhat of an outsider, having never held elected office until he was inaugurated in March 1929.

Today, people associate him with massive infrastructure projects like the Hoover Dam, as well as the Mexican repatriation program, which deported over 500,000 illegal Mexican immigrants.

Hoover also placed tariffs on foreign products entering the US and established other protectionist trade policies.

Of course, when people think of Hoover, they mostly think of the Great Depression.

In August of 1929, the Fed raised interest rates and effectively ended the easy credit.

Only a few months later, the bubble burst on Black Tuesday in October 1929, barely seven months after Hoover took office. The Dow lost over 12% that day. It was the most devastating stock market crash in the US up to that point. It also signaled the beginning of the Great Depression.

This happened on Hoover’s watch. And because of that, people pinned the blame squarely on him, regardless of where the fault lied.

Hoover was an easy target. The Democratic National Committee’s publicity chief coined the term “Hooverville” for the countless shantytowns that sprung up across the country. 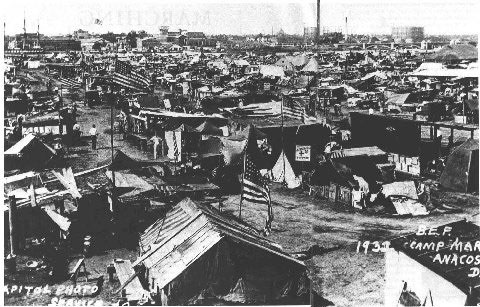 Hooverville outside of Seattle

The term was such a hit, they tried coming up with others.

Newspapers were “Hoover blankets.” The cardboard used in a worn-out shoe was “Hoover leather.” A “Hoover wagon” was a car with horses hitched to it because the owner couldn’t afford gas.

It was obvious a Democrat would win the next election, which is exactly what happened. It took Republicans another 20 years to take back the White House.

Like Hoover, Trump is a rich businessman with investments around the world. He’s also an outsider who hasn’t held elected office before.

Like Hoover, Trump has a troubled relationship with Mexico. Hoover started the Mexican repatriation program. Trump has inflamed Mexicans with his rhetoric and plans to build a border wall.

Hoover signed the Smoot-Hawley Tariff Act into law under pressure from struggling American workers. The law raised tariffs on thousands of imported goods to record levels. It also kicked off a tariff war, reducing American exports by half. It was a crushing blow to the American economy.

Trump is the most protectionist president since Hoover. He’s threatened to slap a 45% tariff on Chinese imports and a 35% tax on Mexican imports.

Trump says “China is eating our lunch” and sucking “the blood out of the US.”

Hoover inherited a stock market bubble near its peak—fueled by the Fed’s easy money policies.

I think Trump has, too. And he knows it. In recent months he’s called the stock market a “big, fat, ugly bubble.”

There’s an excellent chance this bubble will burst on Trump’s watch. And Democrats will pin the blame on him, just as they did with Hoover.

Trump is the perfect scapegoat. If new shantytowns sprout up, they won’t be Hoovervilles—they’ll be “Trump Towers.”

All this is why what happens after Trump’s inauguration could change everything… in sudden, unexpected ways.

This is exactly why Doug Casey and I put together a time-sensitive video explaining how it could all go down.

You absolutely must see this urgent video before Trump’s inauguration in two days. Click here to watch it now.