What the heck is the inverted yield curve?

You might be asking yourself this question. That’s because everyone’s talking about it.

The inverted yield curve is one of the most reliable economic indicators out there. It’s accurately predicted every single U.S. recession since 1957. It also tipped investors off before the last two major market meltdowns.

It’s foolish to ignore it. This is especially true since this indicator could flash a major warning signal any day now.

Today, I’ll tell you what to do with your money in case that happens.

• But first, let me explain the yield curve…

The yield curve plots the difference (or spread) between two interest rates. Usually, one yield is from a long-term bond. The other is from a short-term bond.

More on that in a second. But first, let’s look at this chart. 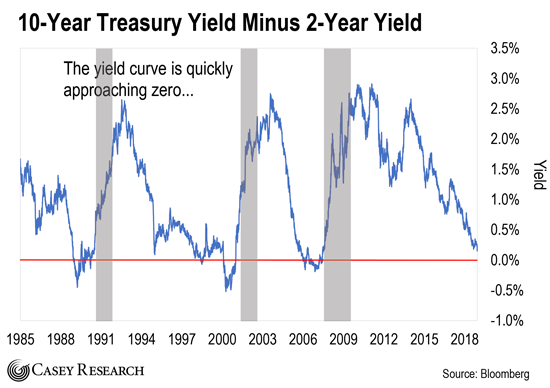 The line you see is the 10-year yield minus the 2-year yield. The gray bars represent the last three recessions which followed after the yield curve inverted (more on that below).

Right now, the yield curve is above zero, as you can see. That’s normal because investors demand more money to lend money out over long periods.

• If it dips below zero, we will have what’s known as an “inverted yield curve”…

This would mean investors are getting paid less to lend money over 10 years than two years.

That’s not normal… So why would it happen?

Well, many believe the yield curve inverts when investors get worried about the economy. And many investors take shelter in long-dated Treasuries when they’re nervous. That drives down long-term bond yields, which fall when bond prices rise.

Now, I realize I’m piling a lot of information on you in this essay. But the thing to remember is that an inverted yield curve can tip you off to impending softness in the economy.

And it’s historically done an incredible job of this.

And that’s just one example.

You’d be hard-pressed to find a more reliable economic indicator.

That said, a return of the inverted yield curve wouldn’t mean that the economy’s going into a tailspin tomorrow.

On average, it inverts 14 months before a recession begins. It’s also worth mentioning that the inverted yield curve tends to appear eight months before the stock market tops out, on average.

So, an inverted yield curve doesn’t signal imminent danger. But it does act as an early warning sign.

But it could any day now.

To understand why, look at this chart. It shows the yield on the 10-Year U.S. Treasury. 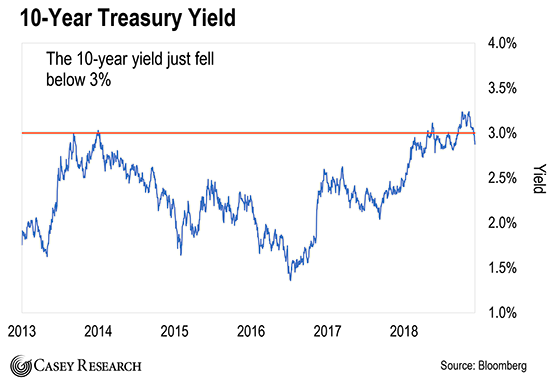 You can see that the 10-year yield recently broke above 3%. That suggested we’d see higher yields on the 10-year, since this level had previously acted as strong resistance.

In other words, we likely just saw what’s known as a “false breakout.” And that means 10-year yields could fall rapidly from here.

If the 10-year yield falls faster than the 2-year yield, the yield curve will continue to flatten… and eventually invert.

And there’s good reason to think that will happen.

The S&P 500 has fallen 9% since setting an all-time high in September.

Meanwhile, the iShares 7-10 Year Treasury Bond ETF (IEF), which invests in intermediate-term U.S. Treasury bonds, is up 3% since early October.

If money continues to shift from stocks to bonds, the yield curve will invert. And that would signal trouble ahead for stocks.

• So consider going on the defensive if you haven’t yet…

Here are a few ways you can do that…

Lighten up on companies with a lot of debt. If the economy weakens, heavily indebted companies will struggle to repay their lenders. Those are stocks you want to avoid at this stage in the economic cycle.

Hold extra cash. Going to cash will also cushion you against big losses should stocks continue to slide. It will also give you dry powder to buy world-class companies on the cheap.

Own physical gold. As we often point out, gold is real money. It has preserved wealth for centuries because it’s a unique asset. It’s durable, easily divisible, and easy to transport.

It has also survived every major financial crisis in history. This makes it the ultimate safe-haven asset. Learn the best ways to buy and store it in our free special report: “The Gold Investor’s Guide.”

P.S. Along with owning gold, you may also want to speculate on gold stocks during this time. Here’s master trader Jeff Clark with more on why gold stocks could be gearing up for a rally…

Chart of the Day: A Bullish Setup for Gold Stocks

The gold sector is gearing up for a big move.

Gold stocks haven’t done much over the past two months. The VanEck Vectors Gold Miners ETF (GDX) is trading today at just about the same level it traded for back in early October.

Some folks might consider that to be a good thing. After all, the S&P 500 has lost about 4% over the same timeframe.

But gold stocks are often seen as a hedge against a broad stock market decline. So the gold sector’s failure to rally as the S&P 500 has fallen is a bit disappointing.

However, the gold sector still looks bullish to me. In fact, it looks like GDX could kick off a big move any day now.

Take a look at this chart…

Energy is building for a larger move.

And since we’re heading into a seasonally strong period for the gold sector (gold stocks often rally in December and January), the odds favor that larger move playing out to the upside.

There’s no guarantee, of course, that we’ll get an upside move. And we could certainly get some selling pressure in the gold stocks as we approach the December Federal Open Market Committee meeting later this month.

For the most part, though, this setup looks bullish.

Aggressive traders should be buying gold stocks here. I like the potential for a rally in this sector starting soon.

Justin’s note: Jeff’s Mastermind kickoff happens tonight at 8 p.m. ET, and it will be the first time Jeff has pulled back the curtain on his trading strategy.

Jeff is set to share a live trade, his personal track record over the past several years, and many other secrets he’s never shared… until now. He’ll show you the technique he uses to make 400-500 trades a year with his own money.

Just click here and your name will be added to the list of folks attending this free event. Remember, this big event starts just a few hours from now, so if you’re interested in attending, lock in your seat now.

They will destroy marijuana for everyone.

My God… talk about greed that’s beyond normal. That’s evil!

And here I would have thought it would have been Budweiser as they’ve already got the slogan: “This Bud Is For You.” Or better yet, Miller High Life… “Taste Great – Less Filling.” Yes, you can enjoy the free consultation!

Tobacco. NO way. You killed enough people. We don’t need any more of your lies.

You did enough and made enough money. Some of us are still paying bills from tobacco use. So stay out of the weed industry and leave it up to the new generation. We don’t need a monopoly to spike prices as was done with tobacco. You killed my family with lung and bone cancer. I quit 27 years ago. I am still paying for tobacco I once used. Keep tobacco out of the marijuana revolution, so that even the people with medical problems can afford it.

This is my opinion, based on medical and personal documents.