Justin's note: Today’s essay comes from my colleague Jeff Brown, editor of The Near Future Report. Jeff has been working in the tech field for over two decades. He’s always on the lookout for the next world-changing developments.

Last year, Jeff recommended chipmaker Nvidia – the best-performing stock of 2016 – before it climbed 330%. Today, he explains this year’s biggest tech trend…and why it’s just getting started…

Autonomous driving technology is about to completely upend the global automotive industry, which shipped 73.9 million vehicles in 2015. That represents a more than $2 trillion market. And that is just the beginning.

As you can see in the chart below, the $2 trillion market for vehicles is several times larger than the consumer market for televisions, personal computers, or smartphones. 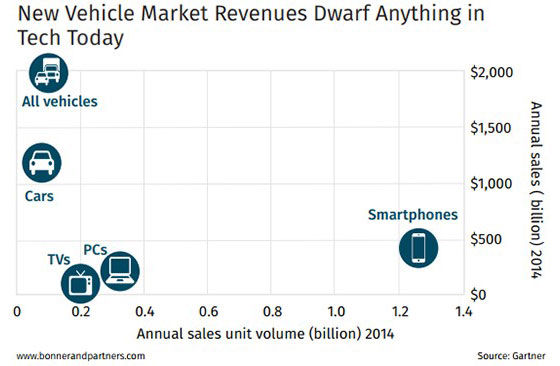 Now, you might think that self-driving cars won’t be here until far off in the future. I wouldn’t blame you, either. In a Wall Street Journal article I read recently, it quoted a professor from Duke University who stated, “We’re a good 15 to 20 years out from [self-driving cars]…”

But you may, in fact, be surprised to hear that the technology is actually available today, in production, and being used by tens of thousands of people. 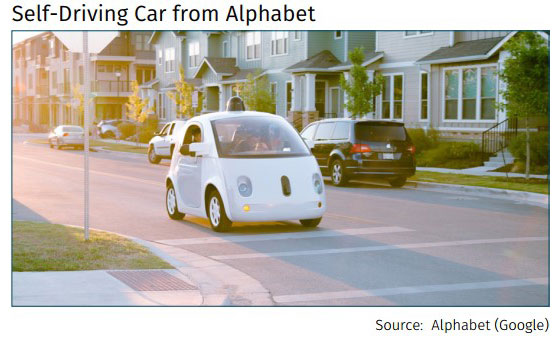 Around where I live, in Silicon Valley, I typically see one or two of these vehicles driving around every single day. Yes, cars without drivers in their front seats. Every day.

These vehicles are produced by Alphabet, formerly known as Google. They are used to shuttle around the company’s employees from location to location. There is no driver at all. Just room for two or three people to sit in the back of the car.

Self-Driving Cars Will Be a Reality This Year

Very few understand how quickly this autonomous driving technology is advancing. It will come as quite a surprise to most to see a fully autonomous passenger car on the market in 2017.

The innovation that has taken place in semiconductors, specifically graphics processing units, or GPUs (camera vision, radar, and machine learning), is responsible for enabling what is truly exponential growth in technology development.

2016 was also a record year for funding early-stage automotive technology companies primarily focused in and around autonomous vehicle technology and related systems. Eighty-seven deals took place at a value in excess of $1 billion.

On top of that, the U.S. House of Representatives Energy and Commerce Committee gave its approval for the SELF DRIVE Act. Given the pace of the progress, it is entirely possible that the bill could get through Congress before the end of the year.

The legislation is significant in that it supports the deployment of driverless vehicles (this includes trucks for logistics) and, at the same time, blocks states from preventing these deployments.

Also exciting is the launch of the new Tesla Model 3. The first 30 production models were delivered as planned on July 28. Tesla announced it now has more than 500,000 pre-orders for the Model 3.

The car is absolutely beautiful and affordable, and it comes with the cleanest and simplest interior that I have ever seen in any car. Just about all the controls of the car are managed directly through a tablet-like screen that sits on the dashboard.

And here’s the important part.

Model 3s come loaded with all of the hardware for fully autonomous driving. A simple software download can be sent to the car to enable the features when they’re ready to be released to the public. The technology for fully autonomous vehicles will be ready well before the regulations get passed, therefore the regulatory discussions will be the gating factor for mass deployment.

Self-Driving Cars Will Change Everything

This is such an exciting time. Every month that passes brings major improvements in autonomous technology, more data, and more proof that the technology is already several times safer than human drivers.

And the impact that autonomous technology will have on our society is remarkable. Once self-driving vehicles become the new norm, it is projected that…

In total, it is estimated that there will be $1.3 trillion in savings from the adoption of autonomous cars. The savings will be driven by productivity gains, fuel savings, and accident avoidance.

With such a strong tailwind, it is likely that children born in the next 10 years will never need to learn to drive a car.

We are now at the very beginning of this explosive trend, but the potential is enormous… The autonomous vehicle technology market is forecast to reach $87 billion by 2030.

Fully self-driving cars are on the verge of mass adoption. Not 10 years from now—right now. In 2017.

So get ready… The future is here.

P.S. This is just a short rundown of the autonomous car industry. There’s far too much to cover here. That’s why I put together a special online presentation to examine all the truly incredible things that are going on in this space – not to mention how I’m helping readers find the most profitable investment opportunities… It’s not Tesla or Alphabet. Click here to watch.