There’s a legendary story we often recount around the Legacy Research office.

Bill’s a contrarian investing legend for many reasons. But there’s one particular – absolutely wild – profit he made that gets talked about a lot.

Bill’s “big trade” in this case wasn’t a stock, a bond, or even traditional real estate.

It was a single piece of a building. A piece he sold for more than he paid to buy the entire building.

Here’s the short version. Bill decided to buy a historic yet rundown mansion in Baltimore. He was taking it off the hands of the city for a fair – but sizeable – price.

After taking possession, he took a close look at the building’s interior. He realized one of the skylights was a rare antique.

He removed and sold the skylight. It fetched more money than he’d paid for the building.

That story of Bill’s epic move came to the forefront of my mind this week. I was researching new opportunities in battery tech.

I realized the exact same thing Bill did in Baltimore is happening in leading tech stocks.

Parts Worth More Than the Whole

This sounds insane. But look at a couple of recent numbers – showing how thousands of investors are reaping billions of dollars in hidden profits on seemingly ordinary stocks.

You’ve almost certainly heard of LG. Many of us have electronics or appliances made by this global giant.

But in fact, it’s at the epicenter of an explosive value-creation event.

LG Chem is preparing to spin out one of its internal divisions: battery technology.

The battery business will become a standalone company, which investors can directly buy and sell.

As it stands, once LG Energy Solutions starts trading, it will command a $59 billion valuation.

The spinout – which is right now a small part inside LG Chem – will be worth more than the entire parent company once it hits the markets solo.

You might think LG Chem’s shares would crash after this spinout. After all, they’re letting go of a division that produces nearly 40% of their revenue.

But in fact, the parent company shares are buoyant. Here’s the one-month chart. 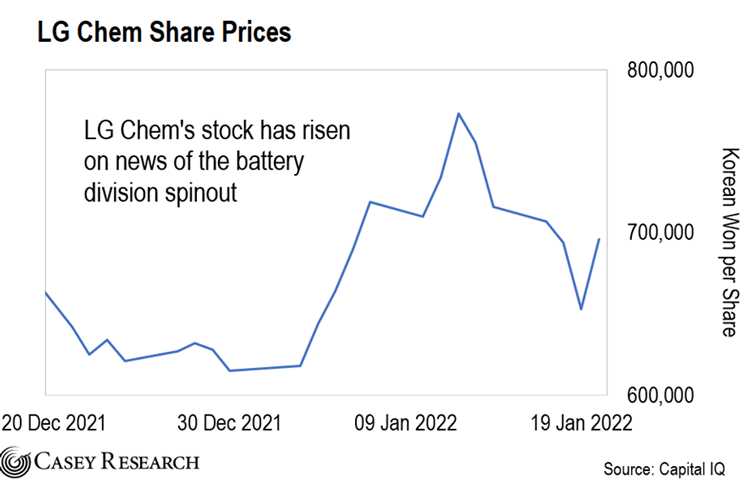 That’s because the spinout of the battery company is a massive value-creation for LG Chem. The parent will own over 80% of the stock in the spinout firm – worth a cool $48 billion.

With those spinout shares, LG is essentially doubling its value through a simple corporate move. The parts are worth more than the whole – just like Bill Bonner’s skylight.

It’s all just as exciting as Bill’s big profit on the office building. Investors get a massive payday selling off a small piece of the business – and keep the lion’s share of the original company.

Look Out for Secret Vault Companies

Spinouts like this are an explosive new part of the tech world. Especially in EV tech, where investor demand is ravenous for new plays on batteries, charging, autonomous driving, and many other subsectors.

I call these “secret vault” companies. They’re stocks that contain a hidden treasure chest… such as valuable but overlooked business segments, intellectual property, patents, or even brainpower creating the next big tech.

Many of these next-generation stocks are lurking inside “boring” companies, completely overlooked by investors. A year ago, no one pegged a giant like LG as the world’s hottest EV power play.

But that’s exactly what it is. Investors are falling over themselves to get into this battery IPO.

Don’t get me wrong, I’m still hunting smaller EV stocks with the potential for 10-bagger gains – like the 2,805% we booked on Blink Charging warrants (for more on our explosive money-making warrants strategy, check out my briefing right here).

But secret vault companies are a compelling part of an EV portfolio. They’ve got market-crushing potential gains – and unlike tiny start-ups, they’re backed by decades or even centuries of revenue, profits, and wide-moat branding.

Conservative meets captivating. Like a breathtaking antique in a stodgy, old building.