You see, every 18.6 years, property, economy, and stock markets move through a repeating series of peaks and troughs – like clockwork.

Using this knowledge… Phil didn’t just predict the 2008 crash – he knew with certainty that it would happen.

He also said property would boom, when American economists were calling for the worst recession since the Great Depression.

Over the next few weeks, we’ll show you how he has forecast every market move using the cycle the market has followed religiously for over 200 years.

And sure… we’ve heard of other experts “predicting” market moves… but the difference with Phil is that he doesn’t predict what could happen – he knows with certainty what will happen.

In today’s essay, despite what you may hear and read from so-called experts in the press, Phil says the housing market isn’t set to crash for another three years.

Absolutely every economist has been and will be wrong this year about the housing market.

Except me… and those who are familiar with my 18.6-year cycle (more on that in a moment).

That’s because every economist out there just doesn’t get how it interacts with interest rates.

Peter Foley, an economist at Credit Suisse, said: “We expect house prices to fall at least 10% next year in the U.S. and U.K.” He added that a “global housing slump will weigh on growth in developed economies in 2023.”

Let’s start with interest rates… during the current cycle, “experts” have been disastrously wrong about them.

These experts were so wrong because they didn’t respect the long-term patterns and cycles that have been ruling the markets for centuries.

This is why they will always be wrong. They are too short-sighted to even begin to grasp what is really going on in the economy.

Stock markets… bond markets… real estate… all follow cycles. And I have been researching them for decades.

For instance, did you know that every 18.6 years… since 1792… stock markets peaked, fell, and entered panics in consistent cycles?

Take a look at the chart below. It tracks commodity cycles since 1792. 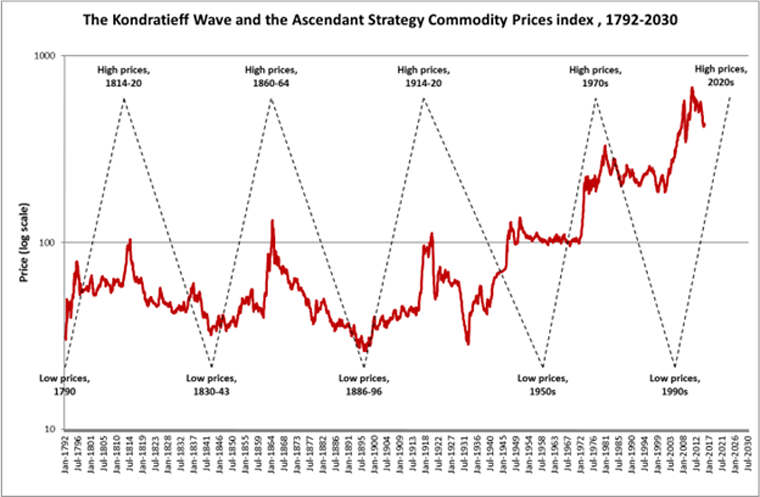 Or did you know that at the bottom of the cycle, new industries emerge, led by next-generation entrepreneurs? The cycle predicts that, too.

I learned this from studying centuries’ worth of data from the most brilliant – albeit largely unappreciated – minds.

I uncovered patterns that helped me – and others – invest in real estate and make life-changing gains.

But for now, I want to warn you…

I want to warn you against listening to the experts who are predicting another housing crash. My research shows that the housing market won’t crash until mid-decade. (And yes… I do know the exact date. But I won’t share that just yet…)

Just know this is not the end of the cycle. Far from it.

We are looking at one of the best buying opportunities in the real estate market for the next two to four years.

That’s what centuries of research says, loud and clear.

You’ll learn how and why right here… in future issues of this letter.

P.S. At this stage in the real estate cycle, homebuilders are raking in massive profits and ambitious projects continue emerging. Follow these links to learn more.

Rachel’s note: If you’re wondering if you can use Phil’s insights to trade markets… the answer is yes.

How? Stick around… keep an eye on your inbox… and he’ll show you.