It was another tough week for investors.

On Tuesday, the Department of Labor announced some hard numbers. Inflation shot up to 8.5%.

That’s the highest rate we’ve seen since 1981. Prices are rising the fastest in over four decades.

And we see this everywhere.

Used car prices are still ahead of new models. In some cases, auto prices grew by double-digit percentages.

Elsewhere, inflation is getting more worrisome. Reports from Germany last week suggest increased food prices. German stores could hike food costs by as much as 50%.

That’s terrifying news. The West has never seen a modern period where we have to worry about unaffordable food.

Worse, it looks like inflation is here to stay. A survey of buyers found they’re expecting 6.6% inflation for the entire coming year. That’s the highest outlook since the Federal Reserve started collecting such data.

It’s scary. But there is an upside for investors.

That’s what I call “the super spike window.” It’s a period where inflation runs wild – and creates massive wealth in a few types of stocks…

It was a tough time. Economic growth slowed and prices spiraled upward. There was growing social unrest, like we’ve seen in recent years.

But it wasn’t bad for everyone.

Investors in a few “weird” spots made an absolute killing. Here’s a chart of one of the key assets that benefited from the inflation surge. 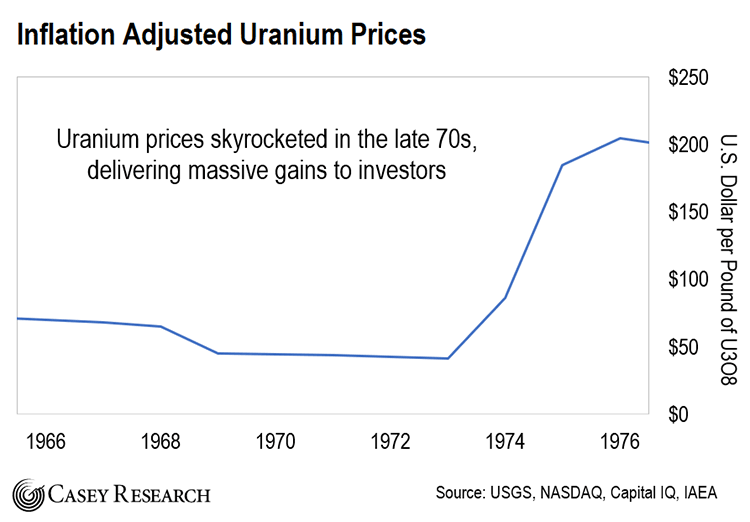 Uranium is a metal used in powering nuclear plants. In the late 1970s, it “super spiked” from an inflation-adjusted $50 per pound to over $200.

That spectacular run drove uranium stocks into a frenzy. It’s a small space – and most investors missed it. But the ones paying attention made fortunes.

And it wasn’t just uranium that soared during the 70s and 80s’ inflation scare.

Investors who caught these super spikes made some of the most exceptional gains of the last century. In some cases, like with uranium, the runs happened unbelievably fast… within a matter of months.

You’re probably wondering: how do the super spikes take place?

When buyers see prices for basic goods rise, they panic… worried they’ll run out of reserve.

And if an end user ran out of supply, it would be disastrous. They’d have to shut down massive facilities, causing huge losses.

So instead of incurring these massive costs, end users scramble to buy all the oil, silver, or uranium they can. And that supercharges the hike in prices.

With higher prices, investors start piling into the commodities… resulting in massive gains like the 2,600% I mentioned above.

The Next Super Spike Window

Tesla got worried because nickel supply is drying up. The nickel market is so tight, prices went up almost 200% overnight.

That’s a classic pattern for a super spike. And it’s not just nickel, either.

Uranium prices more than doubled over the last several months. Same with oil.

So get ready for the next phase of the super spike: investor money flooding into inflation-linked assets. They’re about to unleash a lot of money into safe-haven commodities.

The Sprott Physical Uranium Trust, for example, is a new investment firm that’s buying physical uranium. It’s got $3 billion to pour into this buying.

That could cause massive price spikes in the uranium market.

Like most investors, you might be worried about putting money into these super spikes. But you don’t have to trade physical metals to profit during inflation booms.

Instead, you can use stocks for commodities (like nickel, oil, and uranium)… which often do better than the hard assets themselves.

One good example is that since January, rising inflation drove physical gold up about 8.3%. During the same time, the S&P/TSX Global Gold Index – a basket of leading gold stocks – surged 35%.

Just imagine what stocks will do if physical gold prices rocket 1,951%. That’s exactly what they did in the 1970s super spike.

If inflation keeps spiraling (the way buyers are expecting), this super spike window will burst wide open. That means massive profits, maybe in a very short period of time.

And in today’s environment, this could be the way to protect your wealth. It’s something all investors should at least consider.

P.S. For additional methods to safeguard your wealth and add gains to your portfolio, check out my special briefing here. I’ve laid out a strategy for investing in several inflation-sheltered assets.