Justin’s note: Today, we turn to our good friend Jeff Brown again for another big money-making opportunity in the tech sector. (If you missed Monday’s Dispatch, make sure to catch up here.)

With decades of experience working and living in the heart of Silicon Valley, Jeff has the inside track on the biggest tech trends before they hit the front pages. He’s also the man who pinpointed the best-performing S&P 500 stock of both 2016 and 2018. So when Jeff unearths a big story like today’s, we share it with you right away.

Below, Jeff shows us why self-driving cars are no longer just the realm of science fiction… and reveals the piece of technology that will rewrite our world the way the internet did decades ago…

Last October, a modified Toyota Prius drove itself 3,099 miles – from the Golden Gate Bridge in San Francisco to the George Washington Bridge in Manhattan.

There was a human in the driver’s seat, but he didn’t touch the steering wheel, gas, or brake pedals for the entire trip. The self-driving car drove itself the entire distance.

If any readers are curious about the trip, have a look at the time-lapse video of the entire journey here.

This coast-to-coast, self-driving journey was the first of its kind. Yet it got little to no press.

But make no mistake, this is a remarkable achievement. This sort of trip wouldn’t have been possible even just a few years ago.

Today, I want to share with you the technology that made it possible, and show why it’s a trend that ought to be on every investor’s radar…

I remember when I first sat in a self-driving car. It was October 2011, on NASA’s Ames Research campus in Mountain View, California. The car was one of Google’s earliest versions of its self-driving technology.

But only seven years later, the technology progressed immensely.

The Prius I mentioned above that drove over 3,000 miles without human intervention was outfitted with only seven cameras. Six were positioned outside the car in order to provide a 360-degree view, and one was inside facing the driver.

Equally impressive was that the trip was made with only basic digital maps to work from. This is compared to the high-definition maps often used in self-driving vehicles, which are precise down to a few centimeters.

What was the technology that enabled the self-driving Prius to make its cross-country trip? After all, it looked just like any other car.

The answer is simple… Hidden in plain sight in the back of the car was a black box. It looked something like this. 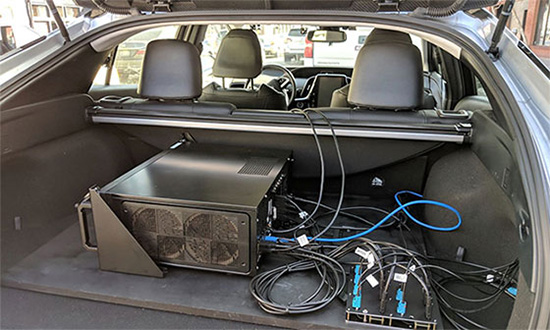 The Secret Hiding in the Trunk

This black box is the key. The black box makes use of a special type of software that is an essential part of self-driving cars. I’m talking about artificial intelligence, or AI.

Contained within that black box was an advanced system powerful enough to take in the data from the Prius’ cameras, use AI to analyze the data, and drive the car and the passenger coast-to-coast safely.

At this point, you may be wondering what AI has to do with self-driving cars.

You see, the way autonomous cars will become dependable enough to function on public roads is through the use of AI.

As these cars drive, they produce a massive amount of data. Just one autonomous vehicle is estimated to produce roughly 4,000 gigabytes of information a day. For perspective, the average high-definition (HD) movie has only 4 gigabytes of data.

This data is then analyzed with AI and used to improve the car’s driving performance.

That’s what allowed the Prius to drive cross-country. The car “learned” how to drive safely by analyzing millions of miles of data. That’s why I say AI is the key to the success of self-driving cars. They simply can’t operate without it.

Artificial intelligence is what will ultimately bring self-driving cars to the masses.

And it’s not just self-driving cars. AI is becoming increasingly essential to our modern lives. In fact, you’ve likely used AI without even knowing it.

Have you ever purchased something by communicating with an Amazon Echo (Alexa)?

Have you ever asked Apple’s Siri to look up a fact from the internet?

Or maybe you’ve simply searched for something on Google.

If you’ve done any of these things, you’ve already used AI. All of these devices and services make use of artificial intelligence.

And AI is becoming a necessity in modern business. Companies like Bloomberg, Walmart, and even Johnson & Johnson are using AI on a daily basis.

According to a November 2018 survey from McKinsey & Company, 47% of surveyed businesses said they had begun implementing artificial intelligence into their business. In 2017, that figure was only 20%.

And according to a recent study by MIT Sloan Management Review, 85% of companies think AI will offer a competitive advantage.

There will come a time soon that AI won’t just be advantageous to companies – it’ll be a necessity. In the next few years, a company that fails to adapt artificial intelligence into its business model would be akin to a company that doesn’t use the internet today. It will become obsolete.

You get an idea of just how essential AI is becoming to corporations by looking at the amount of money companies are willing to pay to acquire AI startups.

The increase in investment in the AI and machine learning (ML) industry over the last few years has been staggering. Just have a look at the AI/ML acquisition value since 2015. 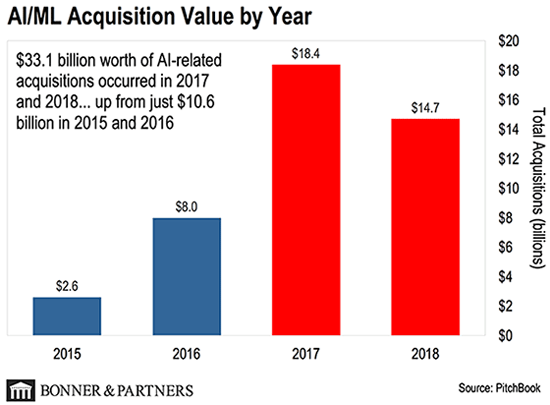 Admittedly, 2017 was a bit of an outlier year due to Intel’s $15.3 billion acquisition of Mobileye.

Mobileye was a major player in autonomous driving technology. It used machine learning for advanced driver assistance systems, a precursor to self-driving cars.

More telling to me, however, is what happened next.

2018 saw $14.7 billion in acquisitions without any outliers like Mobileye. It represented 84% growth compared to 2016.

However, when I look at these numbers, the actual number of acquisitions is an even stronger indicator than their dollar value… 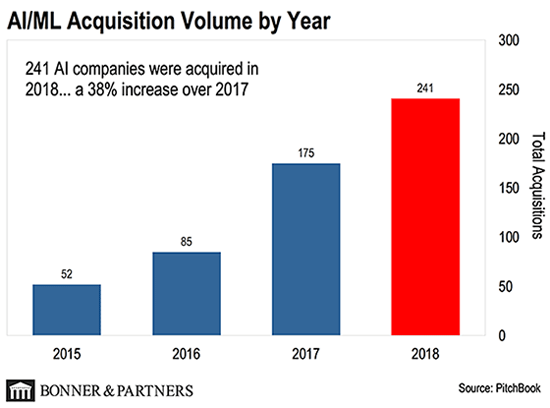 I say that this is a stronger indication of activity because this is a relatively new industry. There just aren’t that many large, $15 billion AI companies around to acquire. Most of the activity is in smaller, early-stage companies that haven’t reached anywhere near $1 billion-plus valuations.

That means that incumbent technology companies that want access to artificial intelligence technology and teams of engineers must go out and acquire these smaller companies.

We have reached an inflection point with this technology. We are on the cusp of explosive growth. Few realize it, but in a matter of a few years, artificial intelligence will be as commonplace as the internet. We’ll look back and wonder how we got along without it.

AI won’t just improve upon today’s technology. It will reinvent it.

P.S. AI will remake our world. But it won’t happen overnight.

Whenever new technologies are introduced, there’s always a period when they’re misunderstood by the masses – and Wall Street. That’s when investors should stake a claim… And that time is now.

If you’d like to learn how to pinpoint the AI companies on the verge of exponential growth, go right here.

Chart of the Day: Greek Stocks Are Rallying… Here’s What It Means

Greek stocks are on a run…

…And they could head much higher in the coming months. I’ll get to why in a second. But let’s first look at what Greek stocks have done already.

The chart below shows the performance of the Global X MSCI Greece ETF (GREK) over the past year. This fund invests in a basket of Greek stocks. 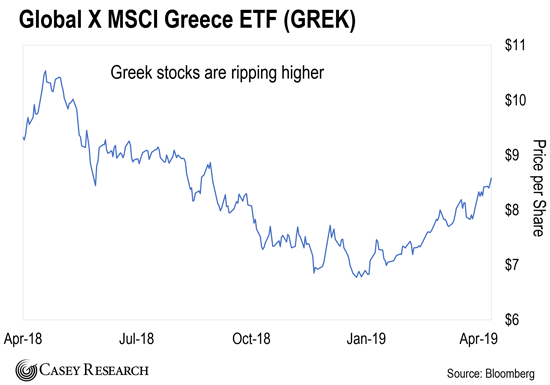 You can see that GREK’s already up 24% this year. It’s also up 14% since I wrote about the emerging opportunity in Greek stocks back in November. That’s double the return of the S&P 500 over the same period.

If you read that Dispatch, you know that I was bullish on Greek stocks for a simple reason: politics.

As I explained then, it was looking like Kyriakos Mitsotakis would become the next prime minister of Greece. That’s important because Mitsotakis isn’t like recent Greek politicians. He’s pro-business. He wants to cut taxes, spur investment, and put Greece’s economy on an “aggressive” growth track.

Fast forward to today… Mitsotakis is the clear favorite to become Greece’s next prime minister.

If that happens, Greek stocks should head even higher. So consider speculating on Greek stocks if you haven’t yet. You can easily do this with GREK.

But here’s the thing… I didn’t just write this to tell you about the opportunity in Greek stocks. I wrote it because there’s a bigger theme at play.

In short, it pays to bet on pro-business politicians.

We saw this play out in Argentina. The Global X MSCI Argentina ETF (ARGT) – a fund that invests in a basket of Argentine stocks – surged 53% in the two years after business-friendly Mauricio Macri became president.

More recently, the same thing has happened with Brazilian stocks. The iShares MSCI Brazil Capped ETF (EWZ) – a fund that invests in a basket of Brazilian stocks – is up 9% since Jair Bolsonaro became president of Brazil. And Bolsonaro, like Macri, is pro-business.

Keep this in mind if you’ve been thinking about speculating on foreign markets. It could mean the difference between bagging big returns and taking heavy losses.

Are you positioning yourself to profit from the AI megatrend? Let us know your thoughts at [email protected].