Rachel’s note: We’ve talked at length about the coming electric vehicle (EV) revolution throughout these pages.

We’ve also explained the need for more efficient EV batteries… ones that can sustain a charge for a longer period.

As the EV and green energy markets grow, so will the demand for these metals.

Here’s how you can profit from this trend…

It’s the fear some electric vehicle (EV) drivers have of running out of battery power on a long journey. This problem has long plagued the EV industry.

But today, I’ll tell you about two rare metals that will help solve this problem.

These two silvery metals are classed as rare earth elements.

There are 17 in total. And they are used in everything from iPhones, electric cars, flat-screen TVs, and computers, to sophisticated military equipment.

Neodymium (Nd) and praseodymium (Pr) are two of these rare earth elements. They’re often referred to by their combined symbols NdPr.

And they’re vital components in some of the 21st century’s leading New Energy technologies.

The good news is that you don’t have to be able to pronounce or spell these metals to understand their importance… or profit from them.

Today, I’ll show you why demand for these little-known elements is set to more than triple by the end of the decade – this will drive prices up.

It all comes down to one of the main uses of neodymium and praseodymium: magnets.

Magnets made with NdPr can generate a constant magnetic force. For this reason, they are known as permanent magnets. This means they don’t need an electric current to generate magnetism.

EVs equipped with NdPr magnets require less battery power than those with ordinary electromagnetic magnets. So they can drive longer distances before needing to be recharged.

Most EV manufacturers, including Tesla, Toyota, Ford, and General Motors, already use NdPr magnets in their motors.

And as I’ve told you before, the number of EVs sold each year is set to quadruple from current levels to about 26 million by the end of this decade.

And with carmakers trying to increase the distance their EVs can travel on a single charge, demand for NdPr magnets from the EV industry will soar.

Currently, EVs account for about 10% of annual NdPr production.

But that is set to increase to 50% by the end of the decade… And by 2035, demand for NdPr from the EV industry is expected to outstrip current supply.

On top of that, there’s another New Energy technology vying for NdPr supply…

Today, wind turbines account for about 9% of the NdPr magnet market.

NdPr magnets eliminate the need for a gearbox in wind turbines. Gearboxes encase the mechanics of the units, similar to a transmission in a vehicle. Without a gearbox, the need for constant maintenance is eliminated.

Additionally, this allows the turbine to generate energy at lower wind speeds.

And the wind energy sector is starting to pick up…

In 2020, offshore wind turbines produced about 35 gigawatts (GW) of energy annually. But the International Energy Agency expects the number of annual offshore wind installations to grow 13-fold by 2030. And this will increase annual output to about 270 GW.

This will generate huge additional demand for NdPr.

Wind turbines need up to 232 kilograms of NdPr magnets per megawatt (MW) of energy generated. So, the extra 235 GW of energy wind turbines will produce by 2030 will require more than 50,000 metric tons of NdPr.

So we have two rapidly growing industries driving demand for NdPr over the coming years.

Meanwhile, the market is entering a period of under-supply due to NdPr’s role in the global shift towards New Energy.

China currently holds most of the cards in the rare earths market. It produces and processes almost 60% of global rare earth supplies. And right now, the supply from China is far from guaranteed.

Other nations, including the U.S., are increasingly focusing on sourcing, producing, or forming other alliances in the rare earths arena.

But even so, the huge spike in demand from the EV and wind energy sectors means we’ll likely see shortages of NdPr in the coming years.

According to independent research and advisory service Adamas Intelligence, by 2030, there could be a global annual deficit of 16,000 metric tons of NdPr.

That should push prices higher. 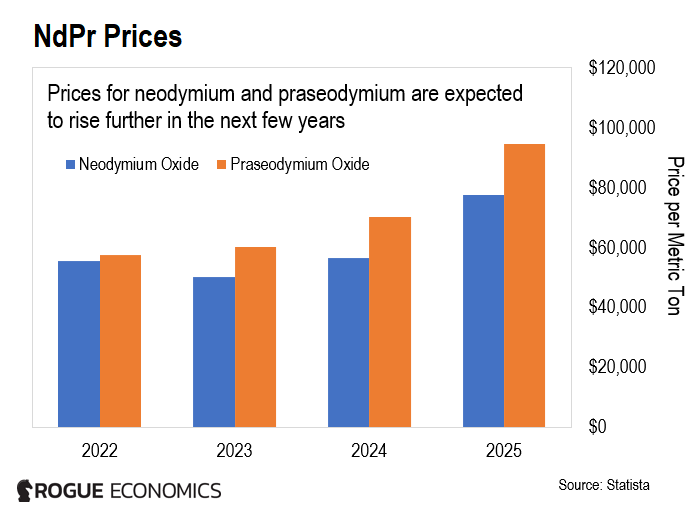 NdPr will play a key role in the New Energy transition in the coming years… and its price will reflect that.

So, how can you benefit?

The best way to get exposure to the growth in NdPr is to buy shares in NdPr mining companies. But these often come with a degree of risk only suitable to those with a taste for the higher-stakes table.

Instead, you can consider investing in the VanEck Vectors Rare Earth ETF (REMX) to position yourself to benefit from the overall growing need for rare earths, including NdPr, worldwide.

The fund holds companies involved in producing, refining, and recycling rare earth and strategic metals and minerals. So, it gives you broad exposure to the REE industry.

As an exchange-traded fund (ETF), it also carries less company-specific risk than investing in individual companies.

Happy investing, and I’ll be in touch again soon.

Rachel’s note: Our very own Dave Forest dealt with the real consequences of running out of charge in a Tesla on the outskirts of Texas…

He swears he’ll never drive another EV until this problem is fixed. But he does believe EVs are the future… so in the meantime, he’s put together the companies that will benefit from this problem, as the free market solves it.

Check it out right here.