It was a quiet October morning on a scenic Austrian road. A 57-year-old man was enjoying a drive in his Tesla when he suddenly lost control. Then, all hell broke loose.

After hitting the guardrail, the driver smashed into a tree. Witnesses pulled him from the vehicle as the car started smoking. He was lucky. Soon after, the battery powering the car exploded in a fury. 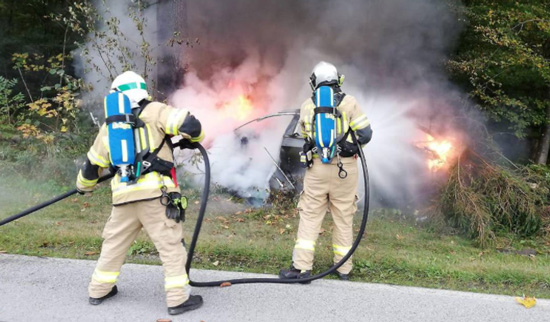 It took 11 tons of water for firefighters to get it under control. Then they submerged the burned car into a special container. 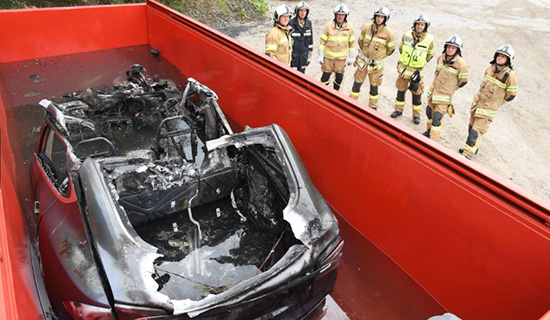 That’s because, according to fire brigade commander Peter Hölzl, the car could still catch fire up to three days later.

This isn’t an isolated incident. In Mountainview, California in 2018, a burned Tesla reignited six days after the initial accident.

Countless other electric vehicle (EV) batteries around the world are exploding, even while parked in a garage, or at a charging station.

The cause of these fires is something called thermal runaway. That’s what typically happens when you damage or puncture a cell in a lithium-ion (Li-ion) battery. A chemical reaction causes the cell to heat up to a point where it explodes.

I got to see thermal runway in action in a controlled experiment. 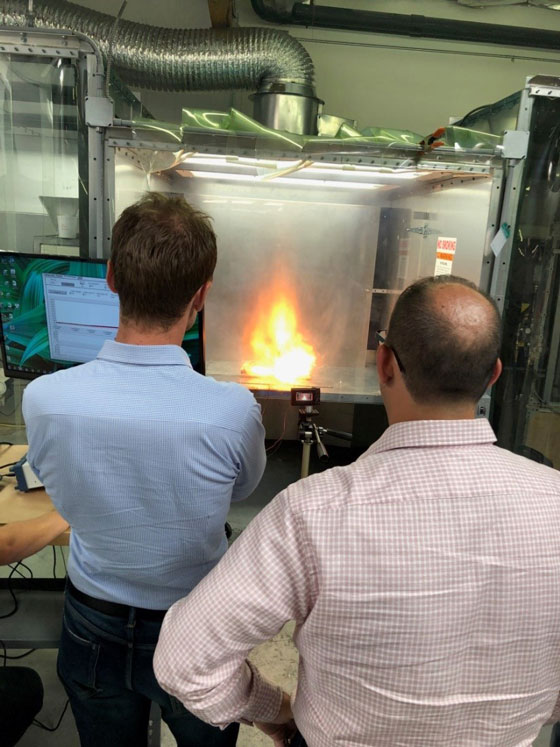 That big flame in the photo shows what happens the moment when thermal runaway takes place. It’s incredible to witness. At first there’s a bit of smoke. Then suddenly there’s an explosion much larger than you would expect.

EV sales are on the rise. According to Markets and Markets Research, there will be about 27 million EVs on the road by 2030. That’s about a 21% compound growth rate.

That’s why there’s a safety push underway. The United Nations (U.N.) Global Technical Regulation on Electric Vehicle Safety (EVS) aims to set standards for EV safety. That includes what happens if a cell in the battery reaches thermal runaway.

The goal was that by 2021, EV drivers and passengers would need at least five minutes to get out after a battery cell has been damaged. However, manufacturers have yet to figure this out.

But it’s not just a concern for EV makers. In fact, it’s a massive problem for any device that requires a Li-ion battery. That includes smartphones, laptops, and vape pens.

If you’ve been on a flight over the past few years, you may have noticed a new announcement before takeoff.

If you drop your phone between your seat, you have to call for help. That’s because if the battery in your phone punctures, it could literally catch fire.

That’s what happened on a United Airlines flight this past February. A phone caught fire, causing the plane to make an emergency landing.

Keep in mind that a typical cell phone battery only has three cells. But they carry enough force to blow a hole in the hull of a pressurized cabin if the battery explodes.

A Tesla battery contains around 7,000 cells. Just imagine how much more damage that could do.

As these batteries become more common, makers of consumer products like EVs and smartphones are desperate for a solution.

The batteries are also used by NASA and the military. Imagine if these explosions happened on a U.S. submarine… or even on the International Space Station. It would be disastrous.

Luckily, my colleague Dave Forest and I have found one tiny company that’s solving this problem. In fact, it’s already worked with NASA to develop equipment that will keep these fires from happening in space.

We covered it in the latest issue of Strategic Trader. Paid readers can catch up here.

But if you’re not yet a subscriber, and want access to this pick – along with the best plays in the tech boom – go right here.

And if you know anyone who owns a vape pen… or drives a Tesla… consider warning them about these life-threatening mishaps.