There’s a grand plan in the works. And it doesn’t matter who’s in control of the government.

The plan is to whittle away the value of the U.S. dollar… in a way you’ll barely notice.

The chart below shows the dollar’s value against a basket of other currencies going back to 1980. 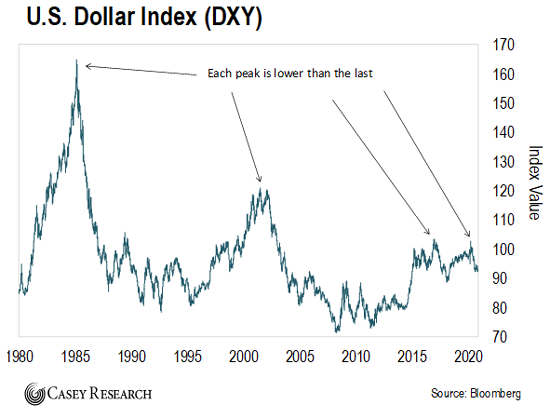 In most cases, you probably wouldn’t invest in this security if we showed you this chart without identifying what it was. But we don’t have that luxury when everything you do involves dollars in some way.

The deceptive part of this is we price everything in dollars. That’s what happens when you name an asset as the world’s reserve currency.

When you flood the system with massive batches of that currency, other assets like the stock market and real estate may continue rising on a nominal basis, but not in real terms. It makes you feel wealthier, but that’s just a smokescreen.

One way to show you what we mean is by comparing the amount of money it would take to earn the same amount of interest as it did 25 years ago.

(We covered this in last year’s issue of Strategic Investor. Subscribers can review that here.)

Last year, median household income was around $66,000. So incomes are higher.

It’s even more stark today. The yield on a 10-year Treasury bond is almost a full one percent lower today than a year ago. That means you would need an additional $2 million in cash – or $9 million total – just to equal that $78,500 income you had in 1995.

Said another way, you would need a 28.5% return on your Treasury bond portfolio just to see that same amount of income. That’s just not possible with Treasury bonds.

That’s how savings erodes. It’s also an exercise in why everyday people feel left behind. It’s one way you get a widening wealth gap.

By the time the average investor notices, it’s too late.

Over the coming years we expect the dollars needed to produce a sufficient income will keep growing. That doesn’t mean we’ll see massive inflation like some analysts are predicting. We could see something more like stagflation. That’s when growth stalls while prices rise. This is the deadliest combination possible.

It’s also more of a reason to own gold. Over the past 25 years, gold appreciated more than 380%. That’s what helps protect your wealth when you can’t even earn a decent rate of interest on your savings.

At the end of the day, there may be surges along the way, but the dollar is heading lower. 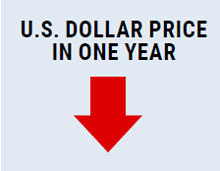 Rachel’s note: In tomorrow’s Dispatch, senior analyst John Pangere shares the greatest call of his career… how it made readers over 4,900%… and why he believes even bigger and better gains are on the horizon for 2021…