Justin’s note: As regular readers know, the markets look like they’re heading lower in 2019. We’ve showed you why (and how to prepare) in recent essays, which you can catch up on here, here, and here.

Today, we’re sharing another important piece to help you sleep well at night as stocks tumble. The following is a unique approach that’s worked well for Strategic Investor editor E.B. Tucker. Read on to see how you can come out of the storm better than anyone else.

I spend 0% of my time worrying about – or preparing for – a crash. Here’s why.

I run a “barbell strategy” with my personal assets.

Picture a metal bar with weights on it.

On one side, I have real assets. These are physical gold, unleveraged property (if you owe on it you don’t own it), and cash value on whole life insurance. These assets are incredibly boring, but they represent real wealth. I think it’s also fair to include some stalwart stocks on this end of the barbell. I also own world-class, dividend-paying stocks. These blue-chip stocks are so boring, I don’t even look up the quotes – they’re not about making huge gains… they’re just equity in big, stable firms.

The other side of the barbell is much more exciting and carries more risk. I’m in tons of private placements. I must have done six to eight last quarter… I have a massive position in a Canadian-listed gold royalty firm where I’m on the board and chair of the executive committee. The takeaway here is I have a lot of very high-risk investments that are paying big for me right now.

But these two ends of the barbell must be balanced to avoid catastrophe. When I have ABC mining stock shoot up 300% after I do a placement, I sell half of it, or more. I take that money and split it between the ends of the barbell. I want to keep the real asset side balanced, then keep taking risk with the other side.

Real assets are real wealth. That’s why in December 2017, I advised my readers that if they had excessive crypto profits to sell at least the cost basis and buy real assets with it. When the tokens return to their actual value, $0, you’ll have the real assets. In some cases, this could be $50-$100 million for young guys. They should consider buying a massive apartment complex with cash… this can always generate income through rent. As people age they learn real assets are more important than speculative fliers.

There are always speculations out there – real assets are much harder to get control of.

Over time, you’d be surprised how good this strategy feels. If the stock market takes a 20% dive overnight, I don’t care. I probably won’t buy more… I’d sit back and see what happens in the ensuing weeks, then make a buying decision when everyone is panicking.

Keep in mind that in 2009 I liquidated my retirement accounts (modest funds here as I was 29 years old) and bought single-family rental homes in Ybor City, Tampa. I paid $10,000 for one home that had a mortgage on it for $165,000 the year prior. I paid $25,000 for a seven-bedroom home that had a $250,000 mortgage default judgment on it. My point here is… people were panicking and nobody was buying – that’s a market bottom.

If I didn’t have some cash then, I would have just been a guy who watched the real estate rot until someone started buying it a year or two later.

The third piece of my barbell strategy is the bar. That’s me… My job is to determine what will generate new capital. I have to decide where to put new weight on the bar.

I have an office in Tampa shared with two of my friends. They worked at logistics company DHL years ago and came up with an idea related to cross-border shipping fulfillment. They took $20,000 in savings and started a company… seven years later selling it to FedEx for $45 million.

The funny thing is, these guys have no clue what to do with money. Worse yet, they’re resistant to any guidance.

To be clear, I do not offer guidance to anyone, ever. If people ask, I tell them what I think, which usually makes them uncomfortable. That’s a sign I’m right.

One terrible trade my suitemates can’t get enough of is shorting the S&P 500. Their logic is they’ll get a huge payday soon and be able to roll that payday into index funds for the next upcycle.

In the meantime, I’m running my barbell strategy producing returns laughably higher than theirs.

With so much money, you’d think they’d have a plan, but they don’t. They’re blown around from idea to idea, trying to outsmart the market… Over time, this ends in tears.

So, in closing, I’d encourage you to consider my barbell management strategy – especially in this current market climate.

Knowing you’ll still be wealthy no matter what the market does will help you sleep soundly in 2019.

Justin’s note: To help you sleep well at night during any crisis, we put together a free report for you. It’s called the “Ultimate Crisis Playbook.” And it’s jam-packed with specific ways to help you turn this into a money-making opportunity.

As you’ll see, there’s much more to know than just holding gold and setting aside extra cash. (Section 4, for example, is a detailed guide on buying and selling puts… and section 5 has critical information for what to do outside the stock market.) Click here to start reading now…

Today, readers respond to our featured interview with Doug Casey, Rick Rule, and Nick Giambruno on gold-backed cryptos. If you haven’t read it, make sure to catch up here and here.

Many of the larger houses on par with Morgan Stanley will not trade bitcoin or cryptos, even if they’re platinum-backed. I’m not sold on cryptos. #justsayin’. Only my opinion.

It’s encouraging that Casey Research is finally talking more sensibly with respect to cryptos. Previously you have encouraged readers to buy bitcoin, which is nothing more than a digital fiat currency with no inherent value. The bitcoin mania was and is the same as the Tulip mania but on a grander scale. Gold-backed cryptos, on the other hand, have the inherent value of the underlying gold. Any fool can see the difference between bitcoin and a gold-backed cryptocurrency.

One of the greatest jobs of theft in the history of mankind is the so-called “bitcoin.” There is nothing permanent about its worth other than the American dollar and at its present rate of “growth,” they both will cease to exist on the failure of either one. The idea of the several “apps” that are beginning to appear will further weaken global monitory values, until and if a form of trade rises that is in itself valuable.  Everything else is dreaming.

That includes all national monitories, since not one of them have a bit of value outside of our imagination! All of your so-called cryptos are like checks written on an empty bank account!  Their only worth is the gabber’s assurance, which is an empty box! Have fun playing your game.  It’ll come to a complete end shortly.

Strange new kiosks are expected to be deployed by officials in 11 states…
And no… it’s not a new type of ATM, voting machine, or bitcoin exchange station. Rather, it’s part of something we call “The Greatest Day in Stock Market History”… 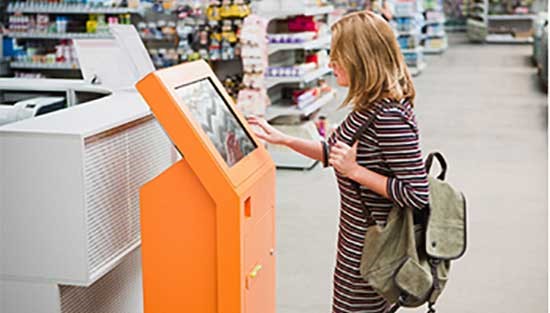