Justin’s note: As regular Dispatch readers know, there is a big opportunity in uranium stocks today. If you missed my recent essays on why you can’t ignore this sector, make sure to catch up here, here, and here.

Crisis Investing chief analyst Nick Giambruno says uranium is the “perfect crisis investment,” and shares more details on this opportunity below. Read on to see how you can take advantage…

In early 2011, one of the largest earthquakes in history hit off the Pacific coast of Japan.

The earthquake, and the massive, 50-foot tsunami that followed, killed over 18,000 people, destroyed over 1 million buildings, and caused over $200 billion in damage.

It was the worst (and only) nuclear disaster since Chernobyl. Afterward, Japan took all 54 of its nuclear reactors offline. And investors flocked out of the market.

Since then, uranium has been in a brutal bear market. You can see this in the chart below. 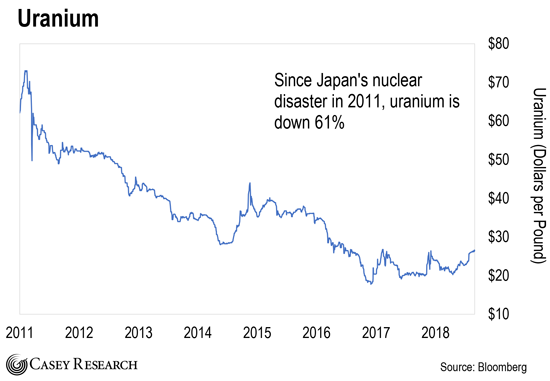 This might sound like a terrible time to get into uranium. But as I’ll show you today, it’s giving us a unique opportunity to profit…

Readers of my Crisis Investing advisory know Doug Casey and I travel the world looking for crisis markets.

The point of this crisis investing strategy is to take advantage of aberrations of mass psychology and pick up elite assets for pennies on the dollar.

And as you can imagine, that describes uranium right now.

And even before Fukushima, others got emotional because it reminded them of earlier nuclear disasters… like Hiroshima, Nagasaki, Chernobyl, and Three Mile Island.

Of course, Fukushima amplified the negative emotions around uranium.

After the meltdown at the Daiichi plant there, the price of uranium crashed from around $85 per pound to under $30. Then it continued to slide to around $18—far below the cost of production (which is around $60).

Today, it’s hovering around $25. There’s no uranium company in the world that can make money at current prices.

Over seven years after the Fukushima disaster, the uranium market is still in the dumps. But it won’t be that way for much longer.

Japan’s timeline for restarting its reactors is a crucial piece of the puzzle in resolving the imbalance in the uranium market.

As I told you earlier, the 2011 Fukushima meltdown devastated the uranium market. Japan shut down all of its nuclear reactors, instantly wiping out 17% of global uranium demand.

Japan did this despite a government policy that requires it to stockpile at least five years’ worth of energy supplies. This policy dates back to the early 1970s, when a large regional war in the Middle East disrupted energy supplies and rocked Japan.

Uranium is the only feasible way for Japan to meet the terms of this policy. It’s simply not practical for a country that lacks resources—like Japan does—to stockpile five years’ worth of coal, oil, liquefied natural gas, etc.

For now, Japan has made an emergency exception because of Fukushima. But without energy security, it’s in a very vulnerable position.

Especially so because, as I wrote recently, the potential for another large war in the Middle East—and subsequent disruption to the oil market, an alternative to nuclear energy—is greater today than it has been since the 1970s.

Given the rising tensions in the Persian Gulf, Japan would be wise to restart its nuclear reactors as soon as possible.

It would be ironic to see Japan suffer from another oil shock during the period in which it suspended the very policy to protect it from one.

Eventually, Japan will restart all of its nuclear power plants. And it’s made some progress already.

So far, nine out of the 54 nuclear reactors at its plants have been brought back online. Many more restarts are on the way.

Admittedly, restarting idled plants is a long, difficult process. It won’t happen overnight. But that gives us a great opportunity to buy quality uranium companies today at a discount.

The best place to start your search is companies that operate in stable countries with a strong tradition of the rule of law—countries like Australia, Canada, and the U.S.

If you haven’t yet, consider positioning yourself in the top companies in those areas.

Justin’s note: Nick currently has four uranium “buys” in his Crisis Investing portfolio. They’re all quality companies and have enormous upside ahead. You can access these picks—and all of Nick’s research—with a subscription to Crisis Investing. Click here to get more details.

And don’t forget that Nick will be speaking at our upcoming Legacy Investment Summit in Bermuda next month. You’ll have a chance to meet Nick, along with all of our Casey gurus, in what will be the most action-packed event we’ve ever held. You can learn more about this exclusive conference right here.

Today, a reader responds to our recent Dispatch on the currency crisis happening in Argentina…

Argentina is a very troubled place at this time and I certainly feel badly for how things have decayed in a once beautiful and prosperous place. Government corruption is taking its toll. It’s an interesting concept to think that bitcoin or any other cryptocurrency could solve the problems that Argentina is once again experiencing.

As you mentioned, it’s out of the government’s control, but I have to ask… What is stopping the government from making it illegal to use? Not exactly the same as the confiscation of gold by Roosevelt via executive order 6102 in 1933, but from that example, I see no reason why it’s beyond the realm of possibilities, especially given the country’s corrupt and crooked political state of affairs. 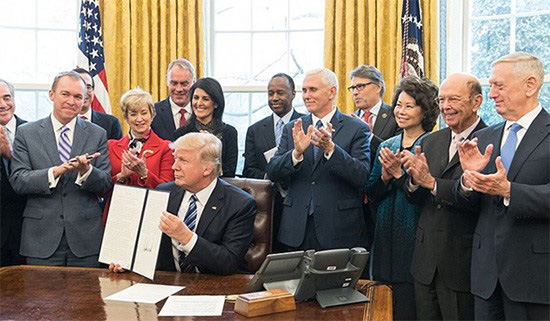