But as Strategic Investor senior analyst E.B. Tucker shows us in today’s Dispatch, now is not the time to be complacent.

He sees trouble ahead. Specifically, he says there are four specific sectors you should avoid at all costs right now. These will get hit the hardest when the market inevitably tumbles.

Read on to see why…

We don’t trust the surge in stock prices so far this year. We see serious trouble brewing.

As you can see in the chart below, the difference between the interest rates on the two Treasuries is almost zero. That means investors flooded into 10-year bonds, sending prices higher and yields plunging. 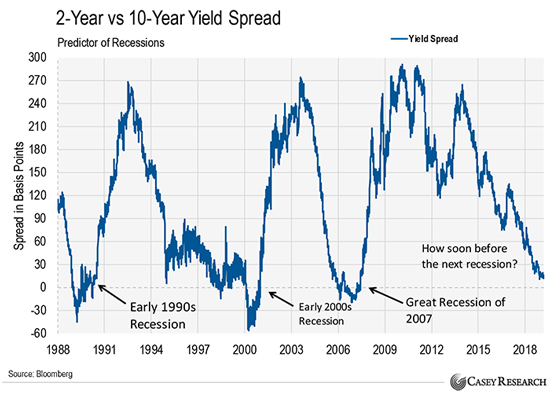 This spread is also an important metric for banks. They borrow money from depositors and lend it to borrowers. When the cost of short-term money (the rate a bank pays on deposits) and the interest rate charged to borrowers is almost the same, banks struggle to turn a profit.

The next thing to watch out for is short-term rates going higher than long-term rates. This would mean investors accept a lower interest rate on 10-year Treasuries than 2-year Treasuries. This is an inverted yield. We’re not far from that today, as loaning the Treasury money for 10 years versus two years only returns an additional 0.19%.

The Federal Reserve sees the same data. It’s likely the reason it’s stopped raising interest rates. The Fed doesn’t want blood on its hands in a market crash. However, its tricks won’t work forever. We predict that at the first sign of real trouble, it will unleash a new round of fiscal stimulus.

And that trouble would send four sectors plummeting in the near term.

In today’s essay, I’ll reveal these sectors… and share some specific companies to avoid at all costs.

1) Companies that sell “want, not need” luxuries to the lower and middle classes

Most people buy products they don’t need – like jewelry – through credit financing. Spending now and paying later is easy. It allows customers to buy more jewelry than they can afford. This is also why these products should rarely be an investment – and why businesses that sell these products are in trouble.

Take, for example, Signet Jewelers (SIG). Signet is the parent company of popular jewelry stores like Zales, Kay Jewelers, and Jared. It sells jewelry to the masses. And most of the purchases are financed using credit.

During a recession, credit is more difficult to get. Borrowers lose their jobs, burn through savings, and have to choose which bills to pay. The list of priorities usually goes: rent, car payment, power, and cable.

Jewelry loans might come in dead last. Naturally, lenders get nervous. This is bad news for companies like Signet that depend on consumer access to credit. Companies with customers who depend on credit see booming sales during times of easy credit. But when the easy money slows down, so do sales. So take a close look at the companies in your portfolio. Do any of them depend heavily on consumer credit?

If so, you’ll want to consider reducing your position. Stocks that depend on easy credit make great potential sell candidates when you’re raising cash. When the good times get started again, you can usually buy them back at a fraction of their current price.

The car business is another sector that suffers in a downturn. Most consumers borrow money to buy cars. Even worse, record numbers of cars are now being leased instead of purchased. When the easy credit slows down, people will drive their old cars longer.

They will fix these cars instead of trading them in for a new car. This is bad for car dealers. They have tremendous expenses maintaining dealerships, salespeople, and expensive service centers. CarMax (KMX) is one of the country’s largest used car retailers. The company buys cars from consumers, reconditions them, and puts them on the lot for sale.

During boom times, it’s a great business. But when trouble shows up on the horizon, it means dark days ahead for all car dealers. During a downturn, most customers have fewer options. They also often have less income. Further, used car retailers like CarMax hold used car inventory as their primary asset. As the massive boom trend of leasing cars slows down and begins to unwind, the used car market will be flooded. The value of used cars will fall. Meanwhile, customers in the market for those cars will have less borrowing power in a recession. It’s a double whammy for used car retailers. And it’s likely to happen at just the wrong time.

New car dealers suffer a similar fate. It’s common for car manufacturers to fill dealer lots with new cars on credit. Dealers typically have several months of low-cost financing from manufacturers, allowing them to display and sell cars before actually paying for them. But when sales slow, this amounts to a huge liability for dealers.

AutoNation (AN), Penske Automotive Group (PAG), and online used car retailer Carvana (CVNA) are three other good sell candidates. These companies are well-managed… but even the best managers can’t survive when sales dry up. Stay out of these stocks at a time like this.

Homebuilder stocks are another great sell candidate. Companies like KB Home (KBH) sell homes to customers that normally borrow most of the purchase price through a mortgage. KB Home depends on credit. When easy credit stops and a recession starts, the company’s sales slow dramatically.

To make things worse, a homebuilder’s largest asset is its land held for development. This means large tracts of land purchased and prepped for homesites. These companies often invest tens of millions in roads, sewers, and basic utilities preparing new neighborhoods for construction. If the economy slows midway through this process, it can be stuck with expensive lots.

After close to 10 years of economic recovery, homebuilder stocks have been flying high. Things can’t get much better. That’s why they make a great candidate for raising cash. Another homebuilder to stay away from at a time like this is William Lyon Homes (WLH). The California-based company may survive a decline in home sales… but its stock may not. These companies have big financial commitments and often heavy debt loads. If sales slow, their stocks often fall in a hurry.

Warren Buffett said it best: “Investors have poured their money into airlines and airline manufacturers for 100 years with terrible results. It’s been a death trap for investors.” The airline business looks great at the end of an economic boom. Finally, planes are full, ticket sales are high, cargo holds are full, and competition is fierce.

That’s also when airlines expand fleets, buy back stock, buy competitors, and increase dividends. This is a mistake. When the economy slows down again, airlines desperately need cash. But because they spent it all during the good times, they’re often broke (or close to it). Because of this, airlines have spent the last 100 years in a boom, bust, binge, and purge cycle. Just like Warren Buffett said, they’re a death trap for investors. That’s why right now is a great time to sell airline stocks. Business can’t get much better.

But it can get a lot worse. When a downturn comes, airline stocks fall dramatically… and some go bankrupt. Even the survivors have to issue more stock, borrow money, and endure tremendous pain.

If you’re holding airline stocks and looking to raise cash, follow Doug Casey’s advice and “hit the bid” before it’s too late.

If you have exposure to these sectors, consider selling today. They will be the first to get hit when the market tumbles.

P.S. While we see trouble ahead, that doesn’t mean you can’t profit. In fact, for strategic investors, this is a golden opportunity to buy the right companies that investors are completely overlooking right now.

In fact, in my Strategic Investor portfolio, I currently have 21 explosive recommendations set to soar in the months ahead. You can access these picks, and all of our big money-making research, with a risk-free trial subscription today.

Are you invested in any of the four dangerous sectors that E.B. mentioned? Are you worried and considering selling, or holding out for the long haul? Let us know at [email protected].

As a Dispatch reader, you’ve got an exclusive invitation to join us at the second annual Legacy Investment Summit on September 23-25.

And for a limited time, you can secure your tickets for hundreds less than everyone else will pay…