Something remarkable happened a little over a year ago…

It was a piece of legislation that launched one of the largest-ever investment sprees in U.S. history.

This law, which received bipartisan support, will upgrade U.S. infrastructure and incentivize businesses within that sector to become increasingly competitive.

From roads, bridges, to broadband networks and water infrastructure… the government is about to invest in pretty much any system that connects people, companies, and data.

Single-handedly, the government created a massive profit boost for the companies involved in this legislation – and a disadvantage for those who are not.

Today, I will remind you why the Infrastructure Investment and Jobs Act of 2021 will become a key performance driver for stocks in multiple industries this year… and how it will unlock a floodgate of investment opportunities.

The Rubber Is About to Meet the Road

The Infrastructure Act includes about $1.2 trillion dollars in total spending.

So far, about $120 billion for specific projects has been announced, according to Fortune.

But first, let’s consider how just about 0.2% of the Act’s dedicated funds, or $2.2 billion, can create a remarkable difference.

Take the planned upgrade of the Brent Spence Bridge in Covington, Kentucky, as a case in point. It calls for the construction of a companion bridge to the existing bridge connecting Cincinnati and Covington – also dubbed the second-most congested area in the U.S for truck bottlenecks.

According to a report by the American Transportation Research Institute, the Brent Space Bridge is one of the busiest trucking routes in the United States – but it remains unsafe, overcrowded, and inefficient.

The new bridge, therefore, is meant to alleviate these bottlenecks… and create better traffic conditions for everyone on the road.

This week, President Biden will visit Kentucky and make a rare appearance alongside Mitch McConnell, a Republican Senator from that state. They will promote the construction of the companion bridge – one of the key routes connecting the Midwest and the South.

Here’s a digital render of the new companion bridge (left). 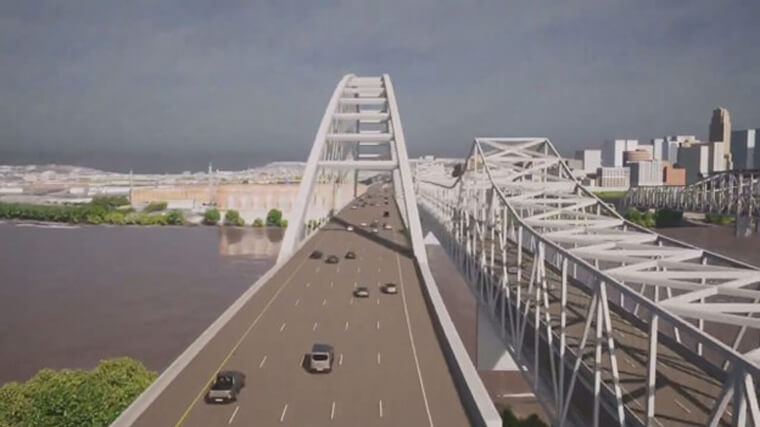 The best part is, the construction of the new bridge is the effect of spending just 0.2% of the total Infrastructure Act funds.

Yet, it’s a game changer for one of the most important national corridors for commerce. Right now, more than $400 billion in goods cross the bridge every year. With the new bridge finished, that figure could double or more.

And the government will still have 99.8% of the Act funds to spend.

How the Infrastructure Act Will Create Investment Opportunities

Government projects like the Brent Spence Bridge upgrade have several positive effects on the economy.

They create jobs, mostly local ones.

For example, the upgrade requires concrete and other materials. So their suppliers will profit from the government contracts associated with the project.

When completed, the bridge will allow more traffic and goods to cross. It will improve supply chains, which were constricted since the old bridge, built in the 1960s, couldn’t handle the amount of goods moving through it – such as more than $1 billion worth of freight every day.

This is called the “multiplier effect.”

The World Bank estimates that a dollar spent on infrastructure creates about $1.5 in economic activity.

So, a $1.2-trillion bill could roughly create $1.8 trillion in economic activity.

Overall, the nationwide infrastructure project is a trillion-dollar trend that started back in November 2021 and has recently begun to make its way into the economy.

That’s why Casey Research colleague and financial expert Nomi Prins is watching the effects of this massive stimulus package.

What’s more, she is going to discuss in detail the winners and the losers of this government legislation in an upcoming event on January 12.

P.S. Stay tuned for more details about how to attend Nomi’s special briefing, due out next week.