To get the right answer…

You must ask the right question.

Because many folks are asking the wrong question.

And so, they’re coming up with the wrong answer.

What question are they asking?

We do this by showcasing ideas from our in-house investing experts: Nick Giambruno, Dave Forest, and the founder of our business, Doug Casey.

And today, we’ll explore what some folks may have gotten wrong about today’s biggest investment trend: bitcoin.

What “Wrong” Question Are Investors Asking?

As I said above, right now many folks are asking the wrong question when it comes to investing.

The question often asked is: Which is better – bitcoin or gold?

On the surface it seems a fair question.

The problem is, the answer given can only be bitcoin… or gold.

But we say the question is irrelevant, or at best, ill-thought.

Or whether sight is better than hearing.

There is no “better.” And you don’t have to choose between one or the other.

We think the better question to ask is: What is the single best way to profit from bitcoin and gold?

The truth is, there are many opportunities to profit from both. That’s why it’s crazy to pitch one against the other.

So this week, we’re going to bring you our experts’ favorite hidden ways to play both investments. They’re strategies many investors don’t consider… and they can often lead to explosive profits.

We’ll focus more on gold in the coming days. But for today, we’re turning to colleague Nick Giambruno… and one type of bitcoin investment he thinks everyone should own…

Nick is just about the most bullish guy we know when it comes to bitcoin.

So bullish that he says investors should be willing to pay up to $100,000 when it gets that high.

And clearly Nick believes the price will go much higher than that.

But more than that, Nick says every investor should own a specific set of bitcoin investments – that could make many multiples of what you’d make from bitcoin alone.

And even better is the fact that you can access these investments even if you don’t own bitcoin.

Unlike bitcoin, you can buy this set of investments in a regular brokerage account.

And they give you the chance to make even bigger gains based on the performance of bitcoin.

Nick calls these investments “BitStocks.” As he explains:

[“BitStocks” have] outperformed Bitcoin by 10 times – or more.

And I’m not talking about worthless altcoins… or the confusing NFT craze… “BitStocks” are different. Yes, they’re tied to the price of Bitcoin… but that’s where the similarity ends.

Compared to the near trillion-dollar market cap of Bitcoin… these companies are tiny, ranging anywhere from $35 million to $5.5 billion.

Nick goes on to say that “they’ve outperformed Bitcoin by leaps and bounds,” with one of them going up by 2,123% in just three months. That turns a relatively small $500 stake into $11,115.

Nick explains everything about “BitStocks” here. He believes every investor should have some exposure – and now’s the perfect time to buy in…

A Great Way to Play the Bitcoin Pullback

You see, what Nick calls “BitStocks” is another term for bitcoin miners.

These are the firms that build, maintain, and operate powerful computer systems. Rows and rows of computers and servers, all working to solve the complex algorithm that’s required to unlock a block of bitcoin.

Once these firms’ computers have unlocked a block, they take ownership of it. They can then hold the bitcoin in their inventory, or they can sell it on the open market.

And the recent pullback in the bitcoin price has created a great opportunity to buy in. Six of Nick’s “BitStocks” picks are now trading below his maximum recommended buy price.

But Nick doesn’t expect them to stay that way for long.

If the bitcoin price takes off again – and Nick thinks it will – these bitcoin miners will soon follow. Bitcoin is already up 20% from its recent low.

We think Nick’s latest research is a great (and different) way to play the bitcoin trend. Best of all, you can do it even if you don’t yet own bitcoin.

P.S. Whenever we look at the price action of any asset, we like to get insight from technical analyst, Imre Gams. As investors, we know that prices never go up in a straight line. That’s especially true of bitcoin, which can be very volatile.

So, we asked Imre to give us an update on his recent bitcoin analysis. We wanted to know if the price reacted as he expected over the last two weeks… and what he expects to happen next.

Imre provides his take in today’s Chart Watch below. It’s an important insight for anyone who’s thinking about adding bitcoin to their portfolio…

A lot has happened in the crypto world since our last technical update on bitcoin on June 10.

Since then, bitcoin managed to rally to $41,322 before reversing and breaking below the $30,000 barrier last Monday.

Today, we’ll look at exactly what’s going on with bitcoin… and where it’s likely headed next.

In our last update, I showed you some triangle patterns on the bitcoin price chart, and explained how these patterns can lead to swift price reversals.

To recap, we looked at two triangle patterns in particular. They each produced a similar reaction: A sharp decline after “breaking out” of the triangle, followed by a swift reversal.

Today, let’s look at what happened with the third triangle I identified. 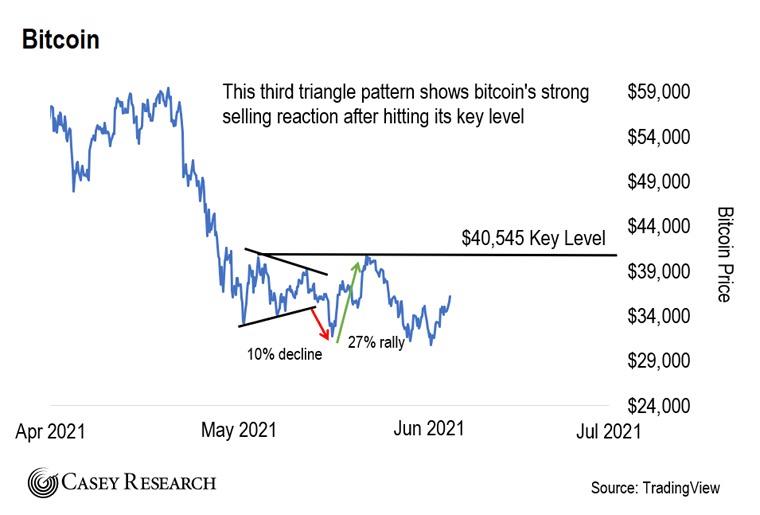 As you can see, we had pretty much the exact same pattern.

The strong selling reaction to this key level confirms its importance to other bitcoin traders.

The fact that bitcoin couldn’t establish itself above this key level puts the bellwether crypto on a more bearish footing… at least in the short-term.

It now seems as though bitcoin is tracing out a bigger picture, “head and shoulders” pattern, shown on the chart below.

A head and shoulders is a classic reversal pattern frequently seen at major market tops. If prices break hard below the neckline, then the pattern can be considered complete.

It’s unclear at this point whether bitcoin will go on to test that major level, but I wouldn’t be surprised if it did, provided that prices are able to break that neckline.

Over the long-term, I remain a crypto bull. However, I’m also very excited by the buying opportunities that this pattern will present.

So, what will happen next…

It’s likely that we are nearing a short-term bottom in bitcoin. Once this bottom is in place, there will be a flurry of buying. This will be enough to lift the crypto market temporarily… Just like what happened back in the middle of April.

After a 27% decline that month, bitcoin rallied sharply. It went from a low of $47,044 to a high of $59,592 on May 9. Bitcoin then collapsed once more, kicking off the next leg of this current bear market. This is known as a “bull trap.”

I see something similar happening over the coming weeks. When this next bottom is confirmed, there will be a tradeable move to the upside. But as I said, it may not last in the short-term.

Bitcoin is volatile, and it creates a lot of great trading opportunities. I’ll keep a close eye on it for you, as the price works through this period of extreme volatility.