Rachel’s note: January was tough on investors. But if you hold on through the volatility, you’ll make it out fine.

Today, Nomi talks about the current market downturns, especially in tech stocks, and what that means for investors. In fact, Nomi says now is a great time to position yourself to profit – especially if you invest in companies that blend “Transformative Tech” and “New Money.”

I’ve been in the markets for a long time.

From my time as an executive on Wall Street in the late 1980s until now, I’ve seen all sorts of wild things.

In fact, in my first year on Wall Street, my team and I had to deal with the 1987 crash.

I was 19 years old, and I had just landed a job as an analyst at the Chase Manhattan Bank.

Trial by fire, I guess. That’s why I know two things…

One, the sky never falls forever. Two, neither do the markets.

Yes, some companies go belly up. But the ones that are flexible with the times… the ones that maintain strong balance sheets and strategies… ride out storms.

The first week of February has so far proven that point. It has been much calmer for the markets than January was (though markets did rally during the last couple days of January).

I talked about the importance of keeping calm in my recent piece on volatility. One sector in particular – the tech sector – did just that.

It shrugged off negative performance and choppiness. And that presents an opportunity for you.

I’ll get to that shortly. First, let’s step back and look at the big picture.

Compared to every other sector in the S&P 500 last month, technology firms took a beating. In fact, they had a rough ride to close out 2021 as well.

The distortion between the markets and the real economy was obvious on both the ride up in share prices, and the fall down.

Why? Tech-billionaires saw a small reckoning in January… while retail investors, who don’t have a stash of billions to count on in a pinch, saw huge losses.

However, February brought renewed optimism into the tech space.

First, Punxsutawney Phil saw his shadow on Groundhog Day. That means we’re in for only six more weeks of winter.

Then, the markets followed suit. They started digging themselves out of January’s hole.

And just as the tech sector led the way in terms of volatility and downward trajectory to kick off 2022, it led this about-face.

Where Tech and Money Collide

We aren’t totally out of the woods yet. But everything that weighed on tech is now giving it fresh energy during this earnings season.

I’ve been writing to you about earnings season – and why the first one of the year is so important – since it kicked off last month.

As I wrote on January 19, the banks normally surpass earnings expectations by a mile. But this time, they didn’t.

The tech sector did (more on that in a moment). So why the recent roller coaster for tech stocks?

Two pieces of bad news have plagued the tech sector…

That’s in order to reduce the huge subsidy it has given Wall Street and the markets.

Tech companies tend to get pummeled in the grip of rate tightening fears, relative to other companies.

That’s because their valuations tend to be more based on future growth than current growth. So if rates rise, it makes borrowing money from the markets to keep up with those growth expectations more expensive.

Now, I think the Fed could have been way more hawkish than it was. And after a mini freak-out, the markets agreed. That’s why markets were primed for a rebound. They just needed a reason.

Apple’s earnings announcement last Thursday provided just that. Which brings us to our second point…

These chips are in basically all of their products. The fact that there is still a global semiconductor shortage is a problem. Apple lost $6 billion in revenue because of its last quarter.

But that loss was smaller than it had expected. And Apple sees brighter skies ahead for semiconductor production and distribution.

Microsoft also announced stellar earnings and record quarterly revenue last Tuesday. But there was too much chop at the time. The markets needed the extra comfort that Apple delivered on Thursday.

The multitrillion-dollar-club tech giant also suggested there would be an easing in supply-chain constraints. That news also helped the market rally last Friday.

But here is the truly transformative news that Apple dropped… It’s also planning to forge into what I call the “New Money” space.

Apple is going to launch a service that would “allow iPhones to accept payments with the tap of a credit card.”

That would convert iPhones to tiny cash registers. And it would make it possible for Apple to compete against payment processing companies.

For example, Apple could compete against Block (SQ) which requires physical payment devices to work alongside iPhones. (You might recognize Block by its old name – Square. Its CEO is Twitter co-founder and ex-CEO, Jack Dorsey.)

Now, earlier I mentioned that to ride out the market storm, companies need a solid strategy. The same is true for investors.

For me, that means choosing names that fall within the five trends I’m watching this year. And that’s where Apple’s move into New Money, which I mentioned above, comes in.

As regular readers know, the five trends on my radar are New Energy, Infrastructure, Transformative Technology, Meta-Reality and New Money.

But I’m especially interested in investing in firms that “blend” with more than one. And many of the tech firms that just announced such upbeat earnings do just that.

What This Means for Wall Street and Your Money

This intersection is a hot area – one that will be fraught with heavy battles over the months and years to come.

But Apple isn’t the only tech stalwart at this intersection. Microsoft is another one. Along with Apple, it announced earnings that far surpassed expectations.

Microsoft’s and Apple’s share prices both showed impressive resilience in the face of recent volatility. Their earnings beats were of the magnitude that Wall Street wanted to post for this past quarter – but failed to deliver.

In the chart below, you can see Microsoft’s outperformance against the broader stock market (the S&P 500) and the S&P 500’s Information Technology sector. 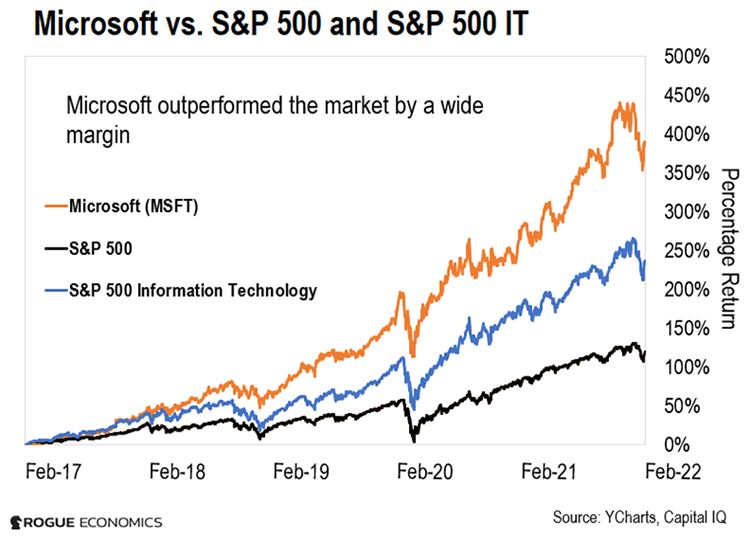 Last week, other tech giants chimed in with solid earnings results of their own, reinforcing the positive sentiment. Google-parent Alphabet’s results killed it on Tuesday.

Whether you love or hate what they do, these mega-tech giants are inhaling Wall Street’s money… even as they, among other things, compete for a big chunk of Wall Street’s business in the New Money space. 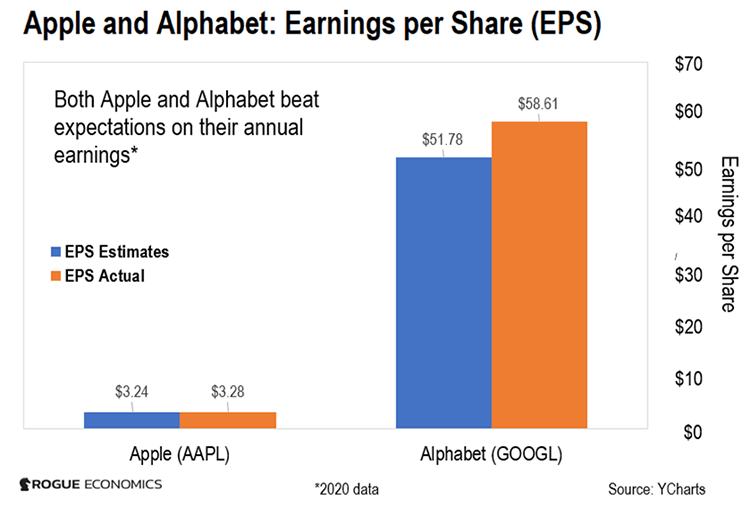 They are constantly adopting Transformative Technologies and expanding them into the Meta-Reality and New Money space.

So buckle your belts. There will be more choppiness to come – especially on the back of any uncertainty over rate hikes.

However, to take advantage of the Transformative Technology blend in the mega-cap stocks, I like the Technology Select Sector SPDR Fund ETF (XLK).

It holds Transformative Technology companies, including tech stalwarts like Apple and IBM.