That’s how much silver has rallied since it bottomed during the corona crash in March.

If you haven’t been following silver, this may come as a surprise. After all, gold’s been getting most of the attention after it hit new all-time highs, soaring past $2,000 an ounce.

But gold’s sister metal is gaining traction. And I think it has major upside from its current levels…

You see, silver’s always been the more volatile metal. During a crash, it typically lags gold. But it usually recovers once the dust settles.

Take it from our in-house commodities expert David Forest:

Perhaps because of its industrial uses, silver tends to take a much larger hit during crashes, falling an average 13%. But it does rebound well after the storm clears.

And so far during this crash, Dave’s been spot-on. As you can see in the chart below, silver fell 36% from its pre-COVID level in March, bottoming at around $11. By comparison, gold only fell 12%. 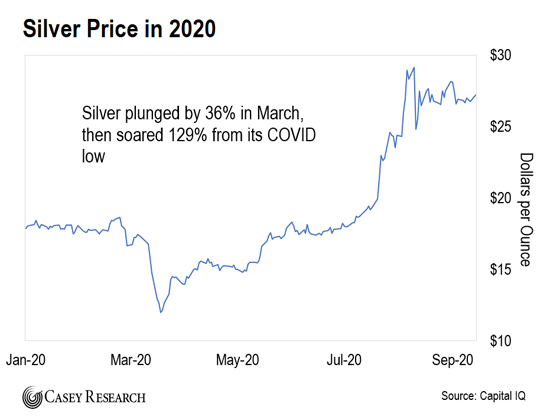 Again, that’s because silver is an industrial metal. The economic uncertainty of a crash impacts many different industries that use silver, which can put downward pressure on its price.

Gold has almost no industrial uses, so its safe-haven status shows earlier.

That’s what we saw during the initial corona crash. And you can see this in the chart below, which shows gold and silver’s performance since 2017. 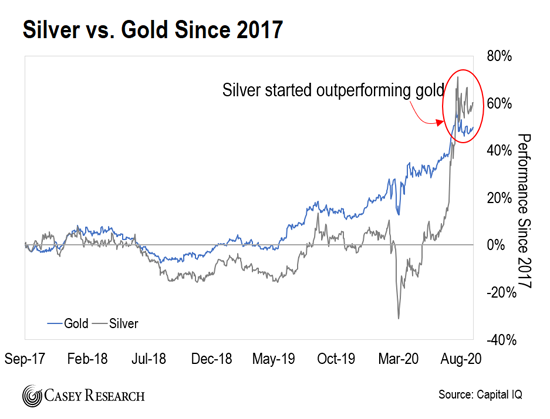 For the most part, the two track closely.

But if you look at the far right of the chart, you can see silver’s caught up to gold… and is even starting to outperform the yellow metal.

I think this trend will continue in the coming months, pushing silver higher. (I’ll tell you more about why in a moment.)

And for the biggest gains, we’ll turn to a tiny group of explosive companies…

It’s one of the reasons I’m big on gold miners. And it’s why I think silver miners are in such a great position now.

Let me give you an example…

Now, say it costs a mining company $18 per ounce to mine the silver.

At a silver price of $20, the company has a potential profit of $2 on each ounce of silver.

That could push the company’s stock higher by 40%, 50%, or more – all because of a small move in silver itself.

If the price of silver continues higher as I expect, that’ll be great for silver miners.

Though silver has started delivering higher returns than gold, silver miners have yet to catch up with gold miners’ performance.

You can see this in the chart below, which tracks the VanEck Vectors Gold Miners ETF (GDX), and the Global X Silver Miners ETF (SIL). 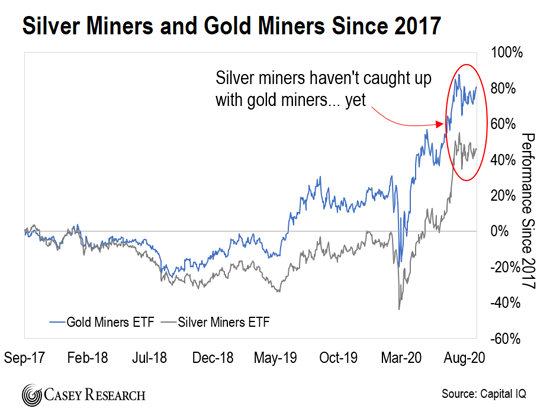 As silver continues its upward trend, I believe it’s only a matter of time before silver miners close the gap with gold miners.

Why? Because just like silver’s performance recently closed the gap with gold’s performance… miners are set to do the same – soon.

And the market seems to agree. Silver miners’ earnings are expected to climb higher in the coming quarters.

For example, Wheaton Precious Metals is the top holding in SIL – it makes up 20% of the ETF. And Wheaton expects its earnings to almost double in the fourth quarter of 2020, compared with the same quarter of 2019.

The other top SIL holdings, Polymetal and Pan American Silver, also expect to see their earnings grow in the months ahead.

Higher earnings should drive the miners’ share prices higher… which should benefit the Silver Miners ETF, as well.

So if you’re looking to ride this trend higher, I recommend taking a look at the Global X Silver Miners ETF (SIL). It should climb as its three top holdings see their earnings grow on the back of a rising silver price… driving silver miners to outperform gold miners.

Just remember to position size rationally, and never bet more than you can afford to lose.