When should you buy stocks?

When should you sell stocks?

We wish we could give you the definite answer.

The truth is there are different ways to play it.

But what we can tell you is that there’s a simple way to at least put the odds in your favor.

A big claim, we know. But we’ll explain everything below…

Today, we show you why now could be the best time of the year to put your cash to work…

According to the data, September is the single worst month of the year for stock returns.

And it’s not even close.

In fact, on average, only two other months have a losing record.

One is February. The other is August.

That’s good news. And the better news is, if you’ve got cash on the sidelines… and you’re ready to put it to work… now is the time to do it.

According to the website Moneychimp.com, based on data from 1950 through the end of 2020, the month of September is the worst-performing month for the S&P 500 Index.

You can see the data by month in the table below. 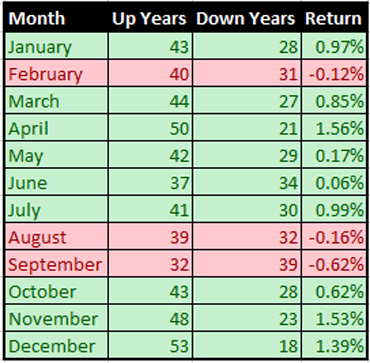 As you can see, the average return in September is -0.62% for the month. It suggests that based on past data, you can expect the market to fall.

And given the size of the average fall, relative to other months, you can likely expect to see increased volatility, too.

Of course, the knee-jerk reaction that many folks will have is to sell stocks… or at least, to think they should sell their stocks.

However, we take the opposite view. As we noted last week, one of the biggest mistakes you can make as an investor is to let others scare you out of investing.

It means, rather than selling your stocks today, your best response (based on historical data) is to use this month to put some of your cash to work.

So what’s the best way of doing that…?

Right now, after just three trading days, the S&P 500 is slightly up for the month. If history repeats, that small gain won’t last for long.

Not only do the percentage returns suggest that, but if you look at the table, September is the only month in 71 years of data where there are more losing Septembers (39) than winning Septembers (32). (Check out the above chart again.)

As an aside, why the months are stacked this way isn’t important. All we need to know is that on average, this is how the market has performed.

Knowing that, you can try to use it to your advantage.

In which case, this is how we suggest you play it…

Over the past few months, we’ve explained the Casey “10 x 10” Approach to investing. That involves dividing your investable assets (excluding cash) in around 10 groups.

Within those 10 groups, you invest in about 10 different assets.

(Note that the 10 groups of 10 assets is a guide. You may only have eight groups… or you may have 12. And the number of assets in each group may vary between – say – seven and 14. You get the idea.)

So knowing that on average September is a poorly performing month, you could use this opportunity to move some cash into one or more of your existing “10 x 10” groups.

Or you could use the market’s down days this month to add a “10 x 10” group. For instance, is there a sector or group of stocks where you feel you “missed the boat?” Perhaps those stocks will fall by enough this month to give you a good entry point.

But remember one thing…

Just because September is a bad month, it doesn’t mean those stocks will trade at 52-week lows. The prices may still be higher than they were this time last year or even last month.

The point is that you’re looking for a reasonable entry point. And again, if history plays out as it has (on average) for the past 71 years, buying in September means you’ll get an increased benefit for the bumper months that follow.

In short, given the historically poor record of stocks in September, it’s likely you’ll see a lot of bad headlines. You may even see and get a lot of advice telling you to sell your stocks.

But you should think twice before following advice like that. Our tip? As we say, use the year’s worst month for stocks… as an opportunity to buy stocks. It could be the single best investment decision you make this year.

And the data says it’s the right thing to do.