Rachel’s note: Since 2015, rising interest rates have been the biggest threat to bond investors.

To combat record-high inflation, the Federal Reserve has been jacking up rates. And that’s driving bond prices lower.

Since the Fed seems bent on raising rates for an extended period, investors need to be cautious with how they approach bonds… and turn to other areas of the market for high returns.

Thankfully, Casey Research colleague and investing expert Teeka Tiwari has a strategy for you that can deliver 30 years of average stock market gains in as little as 30 days.

He’s holding an urgent event tomorrow Wednesday, October 26 at 8 p.m. ET to tell you all about it. And it’s all for free. Just go here to RSVP.

Then, read on for more details about how to beat inflation and end the year better than you went in…

It’s not an exaggeration to say the bond market is going through its own 2008-style financial crisis.

It isn’t a crisis of defaults. It’s a crisis of crumbling bond values. That’s because as interest rates go up, bond prices go down.

Now, that’s not a problem if you plan to hold the bond to maturity. You’d get back 100% of your investment if you did that.

But it’s a huge problem if you borrow against the value of your bonds.

The 10-year gilts dropped as much as 9.2% in a single week and the 30-year gilt fell as much as 23% over the past month, threatening to make the U.K.’s $1.3 trillion pension fund sector insolvent.

As gilt prices cratered, it triggered massive margin calls. The Bank of England had to step in to prop up bond prices in an all-out effort to stave off what could have been the beginning of a wide-range systemic financial meltdown.

Here’s why I’m telling you this…

For nearly a decade, I’ve warned average investors that they’re making a terrible mistake when it comes to bonds.

They’ve been buying an asset they believe can’t go down in price.

And guess who owns most of these assets? Retirees.

Their portfolios are full of long-dated, low-interest bonds.

Since 2015, I’ve sounded the alarm on these “safe” assets. I’ve risked professional ridicule to steer you away from these securities.

I’ve called them a “ticking time bomb” that could go off any moment. And the resulting chaos would lead to an “income extermination.”

Fast forward to 2022. And the ticking bomb I warned about has exploded. 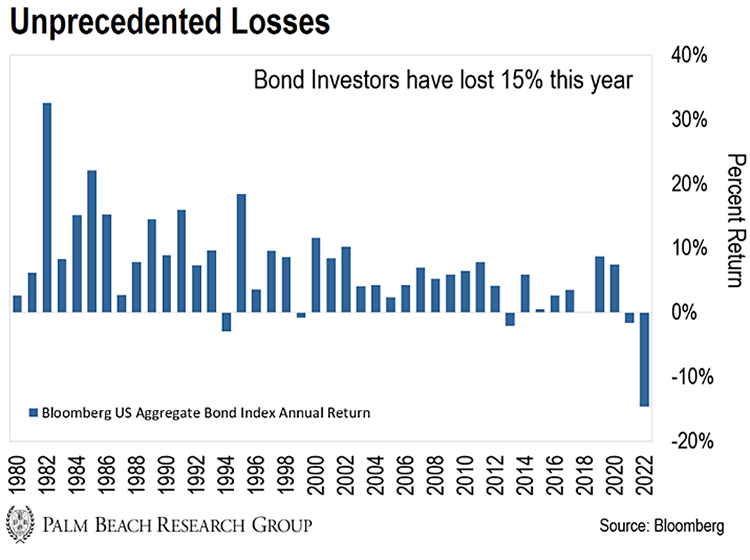 As you can see in the chart above, bonds have suffered their worst rout in decades… Over $8 trillion has been “exterminated” in the past 10 months.

If you own those bonds today, you’ve seen their value drop by as much as 14% and 22.5%, respectively… the latter as measured by the iShares 20+ Year Treasury Bond ETF.

The risk/reward ratio has been so negatively skewed on bonds that unless you were a seasoned bond trader… you were much better off just leaving them out of your portfolio.

That’s why since 2015, I’ve been warning that rising interest rates were the biggest threat to bond investors.

Fed Chair Jerome Powell has made clear inflation is his No. 1 concern. That means we’ll see bond prices decline further as he raises rates – at least in the short term.

That’s why, for the first time in 30 years, I’m seriously considering moving millions of dollars into the bond market to take advantage of the best yields I have seen in over a decade.

Why I’m Looking at Bonds

Recently, I’ve been nibbling into some 7% yield to maturity bonds… but I’m not ready to commit large capital yet.

I don’t think the Fed is done raising rates. I also believe we may see some high-profile bond fund blow-ups that could lead to incredible buying opportunities in the bond market.

As I peruse investment-grade bonds for the first time in 30 years, I see some from globally recognized companies with 6% and 7% yields to maturity.

That’s an incredible return when you understand just how little risk there is in owning investment-grade bonds.

According to S&P Global, the highest default rate on an investment-grade bond was just 1.02%.

If you’re going to wade into the bond market now, I will caution against using bond funds. If rates end up going much higher for far longer than expected… you could be stuck with lifelong losses.

When you own an individual bond and rates go up, you can always simply hold the bond until it matures. At that point, you receive the full-face value of the bond.

For now, I suggest sticking to investment-grade bonds only. There will be a time when it makes sense to buy high-yield (junk) bonds… but I don’t think that is now. That’s because, during a recession, junk bond default rates explode higher.

I believe we’re in a mild recession already. But if the Fed keeps rates high for an extended period, we will see a more serious recession, and that is when you will see some tremendous bargains emerge within the junk bond market.

But we are not there yet.

Between now and then, there’s another strategy you can start running that I believe has the potential to deliver 30 years of average stock market gains in as little as 30 days.

This opportunity is emerging in an unlikely sector of the stock market: blue-chip stocks.

It’s a strategy I ripped right out of Wall Street’s playbook. They’re using it to make a killing from blue-chips.

It’s all thanks to what I call “Anomaly Windows.”

Anomaly Windows are rare periods when you can make exceptional gains from blue-chip stocks.

And there’s an upcoming Anomaly Window that is quite rare. It only comes up once every four years, and it only lasts 30 days. But within those 30 days, blue-chip stocks can go nuts.

And when I say “nuts,” I mean I’ve seen blue-chip stocks offer decades of market gains in a brief period.

Look, I know this year has been rough.

And for many of us, it’d be nice to just break even on our investments by the end of the year… But during Anomaly Windows, you can do better than “break even.”

You can make three decades of returns from safe stocks in just four weeks.

It’s called Retirement Recaptured: 30 Years of Wealth in the Next 30 Days.

Join me tomorrow night, and you’ll learn how to potentially recapture 30 years of stock market gains in the next 30 days.

I’ll even reveal the names of my top three stocks to target over the next 30 days for maximum potential gains.

You can RSVP for my free event right here.

It’s your chance to turn the tables on Wall Street and recapture your retirement… but remember, the Anomaly Window won’t be open long.

So join me tomorrow… This event is free to attend, but you must reserve your spot as soon as possible.

And in the meantime, if you’re looking to expand beyond stocks, I hope you’ll think about what I wrote today…

Because with the right income investments, you’ll have a shot at beating inflation and ending the year better than you went in.

P.S. As I mentioned above, everyone that joins me will get the names of my top three stocks to target over the next 30 days… but that’s not all.

You’ll also receive access to my Q&A session after the event… at no cost to you.

Go here to reserve your spot and learn more.