The COVID-19 pandemic is showing no signs of slowing down any time soon. There are now nearly 3 million cases in the U.S. alone, with over 130,000 deaths.

“Social distancing” and government lockdowns forced many people to do most of their work and communication online, because seeing each other in person became close to impossible.

That led to a boom in online video calls – and a windfall for the companies that provided them.

One of the most popular video call services is Zoom. With a free and easy-to-use system, Zoom provides a perfect solution to a major problem in the age of the coronavirus.

But the company has a dark secret – one with big implications for Americans’ privacy.

Zoom took off as workers moved to remote offices, and it became impossible to visit family members. The number of participants on its calls surged from 10 million in December 2019 to 300 million at the end of April 2020.

That’s a 30x spike in just a couple months. 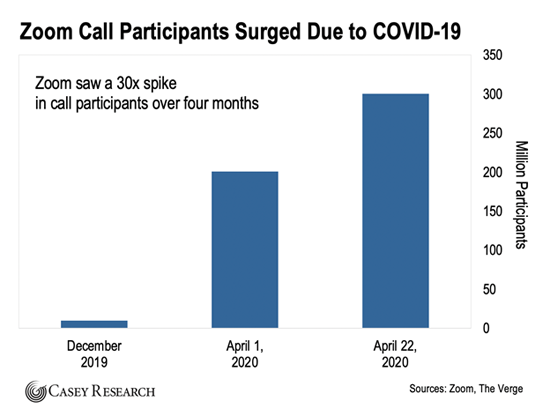 And it’s not just regular businesses who use Zoom to communicate. Government organizations like the Centers for Disease Control and Prevention use it as well.

But there was more going on behind the scenes with the company that most people didn’t know about.

Zoom claimed that any calls on its service were encrypted, meaning no one could hack in and watch or listen to a private call hosted on Zoom.

But that was a lie. With the right tools, it was possible for someone to join a Zoom meeting uninvited and listen to what was being discussed.

It wasn’t long before authorities raised concerns about foreign spy services bypassing this security to access the calls – and then Zoom dropped another bomb.

The company admitted to routing some of the calls through China, even when call participants were outside of it.

China doesn’t have strict privacy laws. It ruthlessly tracks its citizens’ locations, using smartphone apps and state-of-the art recognition technology. While Zoom says it mistakenly routed calls through China, that could have given China an opening to access any private calls on Zoom.

Zoom’s failure to protect and encrypt its users’ data shows how vulnerable the tools we use are.

And it’s a clue to the real threat that Americans are facing: the surveillance state that the U.S. government is building.

And COVID-19 has forced the surveillance state trend into overdrive. As it started wreaking havoc on the economy and attracting every bit of attention of most people, the government saw an opportunity to sneakily pass a law that would stir a scandal if people really understood its implications.

As the world is distracted by COVID-19, the U.S. Senate is trying to pass a bill that would end secure communication and privacy once and for all.

After all, as Casey Report chief analyst Nick Giambruno says, the government never lets a crisis go to waste.

Back in March, two Republican and two Democratic senators introduced the Eliminating Abusive and Rampant Neglect of Interactive Technologies (“EARN IT”) Act. It’s a complex law, but one proposition stands out.

In short, you won’t be able to communicate securely. All chats and calls will be available to law enforcement officials, or hackers who will be able to find a way to exploit the inherent insecurity of non-encrypted communication.

The bill will violate constitutional protections of free speech and privacy.

It’s that bold and ruthless.

The bill will create a “best practices” list for websites to comply with, lest they face enormous legal liabilities. It will put an end to free expression on the internet.

This will create enormous liabilities for companies that allow free speech and encryption on their platforms. To stay in business, they may just comply and stop using secure communication.

The government is becoming increasingly heavy-handed. It wants to learn as much about you as it can.

This includes whom you talk to, where you go – and how you spend your money.

It’s this last part that makes privacy so crucial. The government may start by tracking your calls or your location, but in the end, it wants to also track your money. That’s when it will win the war on privacy.

But there is one asset class that is built with security and privacy in mind. And it doesn’t belong to any country, making it impossible for any single government to crack it open.

Bitcoin uses a combination of transparency and encryption to ensure privacy. Some parts of the crypto infrastructure, like blockchain, are open and available for review to everybody participating in the network. This transparency provides security. You can’t hide a transaction there.

But bitcoin transactions use cryptographic tools to keep them confidential, and for authentication purposes.

Leading cryptos, like bitcoin, use up to three types of encryption to ensure that the transactions taking place within their networks are recorded properly and protected from hacking.

The U.S. government would love to regulate cryptocurrencies, but it won’t ever have complete control and oversight over the transactions taking place the same way it can ask Visa to provide it with your purchase history.

Additionally, there’s no “central server” that would hold all the keys to the secured communication channels.

Compare this to companies like Zoom, which have central offices and are vulnerable to government interference or hacking.

Even if they tried to encrypt their information (and many do), the fact that they have physical presence in the U.S. makes them an easy target for data-hungry government officials.

As the COVID-19 pandemic continues and gets worse in some parts of the U.S., people will pay less attention to other important developments in their life.

But politicians have experience in exploiting chaotic periods like this to make unpopular changes.

This tells me that the anti-privacy laws introduced by the Senate have a good chance of becoming reality.

And this is very scary.

That’s why it’s important to start protecting your finances now. And bitcoin is one way to defend your wealth from government interference – no matter what form it comes in.

P.S. Politicians take advantage of chaotic periods like we’re experiencing today. They’ll use any crisis as an excuse to make unpopular changes that wouldn’t normally pass.

And the “EARN IT” Act is just one example of the government’s recent attempt at gaining more control.

But there’s another threat on the horizon.

My colleague, Casey Report chief analyst Nick Giambruno, recently uncovered a sinister plan hidden in a pandemic stimulus bill… that would confiscate everyday Americans’ wealth and ban those who don’t comply. If you want to protect your money from the government’s cash grab, I urge you to check out his briefing here.