It isn’t even the bursting of the “Everything Bubble,” which has pushed valuations of pretty much every asset class near historical all-time highs.

The real crisis is going to come from the government’s reaction.

First, with the incalculable harm from the unprecedented shutdown of the global economy.

And second, with money printing the likes of which we’ve never seen before.

Governments around the world have thrown out the last semblance of fiscal and monetary sanity. They are destroying their currencies at a breakneck pace.

Where is the government getting this money? It is simply creating it out of thin air.

Inflation Is the Real Crisis

That’s why this crisis is fundamentally different than the Great Depression.

Back then, a gold standard limited the amount of money the Federal Reserve could create out of thin air. Today, there is no such limit.

Allowing the Everything Bubble to burst and cleanse the economy of its massive distortions would be painful in the short term.

But it would enable the economy to rebuild on a better foundation.

However, that is politically unacceptable. As long as politicians have access to the central bank’s printing presses, it will never happen.

There’s no question that, when faced with the choice, politicians will always choose the money-printing option, which inevitably destroys the currency.

It’s the fundamental relationship between politicians and a fiat money system.

They’ll always choose actions that destroy the currency before they do something that would be economically sound, but not the best political decision.

We’re already seeing that play out in this crisis.

In a matter of days, the Fed has created more currency units out of thin air than it has for most of its existence. In the end, it’s likely to be measured in the tens of trillions of dollars, or more.

The human mind has trouble wrapping itself around such figures. Let me try to put it into perspective.

One million seconds ago was about 11 days ago.

One trillion dollars is almost an unfathomable amount of money.

The Most Conservative Scenario

In the wake of the 2008 crisis, the Federal Reserve printed $3.7 trillion out of thin air, which translated into growing its balance sheet by about five times.

The price of gold went up by approximately 2.5 times. Using these benchmarks, we can project that we’re looking at the following:

Let me emphasize that I consider this to be the most conservative scenario. It’s using benchmarks from the 2008 crisis. The current crisis is orders of magnitude larger.

That’s why I expect the Fed’s balance sheet, the federal debt, and the price of gold to all go up even more.

People are increasingly seeing the insanity that central banks are doing.

At the end of the day, gold is just about the only place to be.

I think there’s an excellent chance that gold could hit $10,000 as this all plays out.

And the price of gold is already up 42% since May last year. 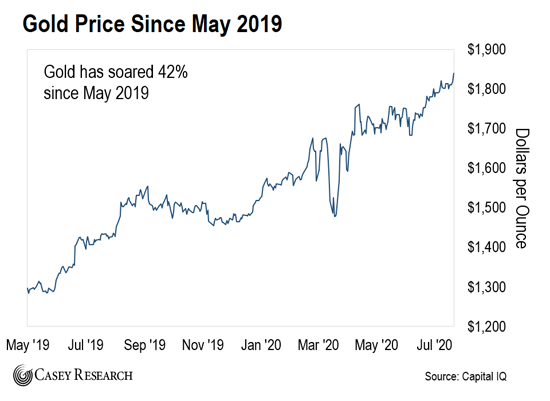 This is just the beginning of what could turn out to be the biggest gold bull market in history. Gold is within a hair of taking out its previous all-time high of around $1,910. Once it does, I expect gold to skyrocket.

Gold is the ultimate form of wealth insurance. For thousands of years, it’s preserved wealth through every kind of crisis imaginable. It will preserve wealth during the next crisis, too.

Owning some physical gold – and keeping it in your own possession – is step one. It’s something everyone should do.

P.S. Owning gold is a great way to protect yourself from government insanity. Politicians never let a crisis go to waste.

And recently, I uncovered a sinister plan to confiscate everyday Americans’ wealth… and ban those who don’t comply.

I put together an urgent briefing where I share all the details, and explain how you can protect yourself from this cash grab. Go here to watch it.