David is tied up with some other pressing work, so Chris will be bringing you today’s Daily Dispatch.

Well, New York City is at it again. First it was trans fat, then calories, and now, the city wants to protect its citizens from the gastronomical pariah du jour, salt.

According to The New York Times, the Bloomberg administration plans to unveil a broad new health initiative aimed at encouraging food manufacturers and restaurant chains across the country to curtail the amount of salt in their products.

The city claims support from health agencies across the U.S. and set a goal of reducing the amount of salt in packaged and restaurant food by 25% over the next five years.

Even though many food companies say they agree at least with the goal of reducing salt, some medical researchers have questioned the scientific basis for the initiative, saying insufficient research has been done on possible effects. While agreeing that reducing salt is likely to lower average blood pressure, they say it can lead to other physiological changes, some of which may be associated with heart problems.

Public officials acting in some far-off government office do not in fact know what is better for you than you do. And blanket (or even specifically targeted) restrictions on the behavior of consenting adults destroy freedom and one’s sense of self, i.e., individuality.

One more reason to fight against this sort of paternalism is because of the precedent it sets. To quote Daniel Klein’s The Moral Consequences of Paternalism:

Up to what point does the government get to play nanny? Where does it end? Sometimes it is the government that seems to suffer addiction – addiction to power – and it is the one that needs to show restraint. Furthermore, the justification of ”it’s for their own good” is bound to be abused. It will be used to justify all manner of special-interest plunder…

With that mini-rant out of the way, let’s move on. 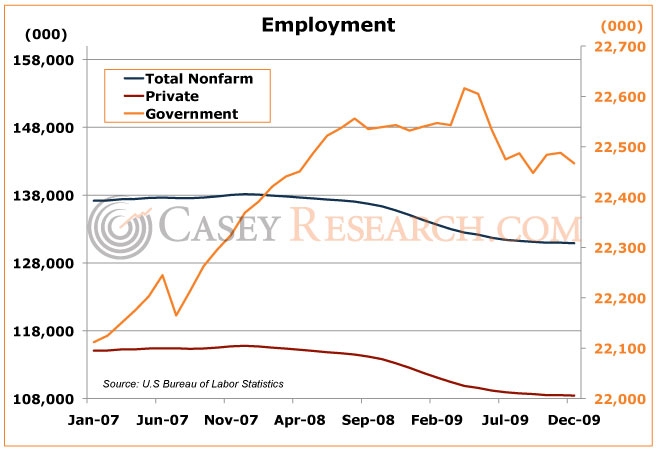 Here are the specifics:

Ergo, as you probably expected, the loss of employment has occurred entirely in the private sector, as Uncle Sam grows more bloated each day. If you happen to be in the private sector, it also might not psych you up too much to know that the average pay per federal worker in 2009 was reportedly $75,419, while per capita average annual income across the U.S. is only about $36,000.

The U.S. has just experienced its second lost decade. And the powers that be in Washington have us on a course that virtually guarantees the next ten years will also be a loss.

If you’re concerned about the direction of the economy and want to learn how to protect yourself, now may be the perfect time to check out our new edition of The Casey Report. In it you will find Chief  Economist Bud Conrad’s comprehensive forecast for 2010 and specific ways to invest; it also includes a special bonus report on expatriating yourself and/or your money. If you’d like to regain control over your money and your life, you won’t want to miss this special edition. And with our 100%, 3-month money-back guarantee, you don’t have to. Details here.

Now, let’s kick it over to Michelle Burgess for an article on an oil play worth paying attention to.

The Other Oil Play You Simply Can’t Ignore

The biggest economic shift of our time is under way.

Cheap and easy oil is gone for good. And given our addiction to low-cost oil, the results are about to put the squeeze on your pocket book.

Increasing prices will have a huge effect on every aspect of your life, from the price of your food, to how much you’ll pay at the gas pump, to the cost of heating and cooling your home.

Nearly everything in our lives revolves around oil.

While demand for oil continues to grow, we are coming to the realization that like all other resources, oil is finite and output is now in terminal decline.

This has the oil industry stuck on a treadmill, running faster just to stand still.

The Globe and Mail reports, “Conventional oil supply (the type of low-cost fuel you can afford to burn) has not grown since 2005, and may never grow again.”

The U.S. Department of Energy has concluded that 2009 was the last year that oil production will keep up with consumption. And if the government is making this admission, it’s safe to say the situation is far more urgent.

On top of this, as the standard of living for people in developing and emerging countries  increases, so does their consumption of oil. A recent article in Reuters said that over 1.3 million vehicles were sold in China during the month of September alone, up 77.8% from the same time last year.

Trading bicycles for brand-new oil-burning cars is a trend that is quickly gaining momentum.

And so, the question becomes: if demand is already outstripping supply, where will we find the oil needed to satisfy the billions of new consumers just coming online, to protect our own lifestyle, and to avoid a dangerous global tug-of-war over this dwindling precious resource?

As dire as this situation sounds, the truth is, we’re not running out of oil. Far from it, in fact. What we are running out of is the supply of cheap, conventional oil we’ve grown accustomed to. And for investors, this has opened a whole new window of opportunity.

The solution for tomorrow’s growing demand will be solved by the industry’s other oil play — namely Canada’s massive oil sand deposits.

Marin’s answer as to why oil sands is two-fold:

And as for why he likes Canada (and particularly Alberta) over other sources of oil sands, the answer is simple. Canada has the best upside for oil sands in the world, with readily available infrastructure and a stable political system. Venezuela and Russia lack important criteria, infrastructure, and political stability.

This chart from Statistics Canada tells an interesting tale. In 2008, investment in Alberta’s oil sands reached a record high of $19.2 billion, a 14% increase over 2007, even after oil prices fell below $34 per barrel. Now that prices are close to $80, development and research will only increase in this proven and reliable resource. 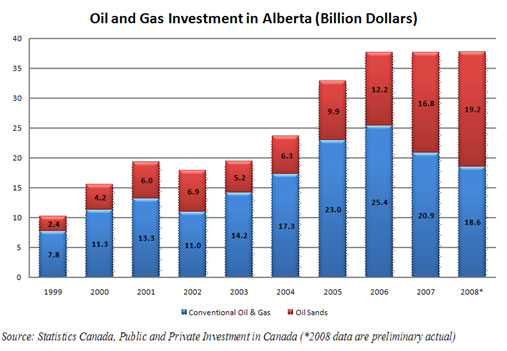 Another noteworthy plus for Canada is a change in the accounting principles, providing the majors with a more favorable financial uptick from the oil sands reserves. Marin feels, within the next few years, that this will offer a tremendous upside for the majors, with excellent growth potential.

If you’re interested in learning more about Marin’s extensive views on the future of oil, and also which stocks he believes have the best potential to capitalize on the coming increase in oil prices, now is the ideal time to sign up for Casey’s Energy Report. This publication is full of must-have information for investors who want to make informed decisions.

In the next year or two, the price of oil will be dramatically higher. That’s why there’s never been a better time to get on board with Marin’s favorite stocks and stake an early position in the explosively profitable oil sector. For more details, click here.

Chris again. Thanks to Sadia for passing along these two interesting stories about UK health care from the Financial Times.

Britain lacks any world-class hospitals because the culture of the National Health Service is still too much one of central direction and control, according to William Moyes.

Having spent six years overseeing the creation and regulation of self-governing NHS foundation trusts – which in theory are Britain’s best hospitals – the chairman of Monitor said that, while the UK had at least four or five real world-class universities, “I do not believe we have any world-class hospitals…

… Mr Moyes said he would probably come in for heavy criticism for saying that. But given how much is spent on the NHS “there’s something wrong in a framework that doesn’t produce that kind of quality”…

… It was not money, he said, because hospitals were probably more generously funded than universities in the UK. It was that even self-governing foundation trusts spent too much time worrying about what the government was doing and what the secretary of state for health wanted…

UK push for greater use of generic drugs
By Andrew Jack

New measures to increase the use of generic medications in place of more expensive branded drugs are being put forward by the government as it seeks to save up to £50m a year – in spite of claims that the shift could threaten patient safety and innovation.

A consultation paper issued by the Department of Health proposes new powers for pharmacies to replace branded drugs recommended on a prescription with cheaper generic equivalents, unless a doctor explicitly forbids it.

It is designed to raise the level of “generic substitution”, helping reduce the National Health Service’s £9bn annual drug bill at a time of funding pressure.

The proposal – which could be implemented this year – has won support from the British Generic Manufacturers’ Association and the Association of the British Pharmaceutical Industry, the trade body for patented medicines.

However, it has raised concerns from some other drug companies and patient groups that it would have little economic impact while threatening health and reducing incentives to invest in new drugs…

The UK is a good proxy for where things are headed in the U.S. Rest assured, the more nationalized the health care industry becomes in the U.S. (it’s already pretty far down the road), the fewer choices we’ll have when it comes to drugs and the worse our hospitals will be.

And that, dear reader, is that for today.

Before signing off, I’d like to mention that our own Louis James, Marin Katusa, and Ed Steer will be speaking and presenting workshops at Cambridge House International’s 2010 Vancouver Resource Investment Conference on January 17 – 18. This is really a must-attend event in the resource sector world. Over 40 market analysts, trading professionals, and renowned economic experts will be participating directly in panels, workshops, and keynote presentations. Plus, more than 250 public companies representing the world’s top mineral exploration and development management teams will be exhibiting. This is your opportunity to speak directly to the CEOs and gain valuable information on development plans and financing opportunities. As icing on the cake, if you register via the link here and enter the promo code “CASEY,” you’ll save $20 on admission.

And with that, dear reader, I bid you good day. David will be back with you tomorrow. Until then, thank you for reading and for subscribing to a Casey Research service!