Editor’s note: This week at the Dispatch, we’re bringing you a series from our Casey Research experts on the best ways to weather a crisis – which is more important than ever given the recent market climate.

Today, we turn to International Speculator editor David Forest, whose team studied which resources are the best stores of value – and the best bets to profit on – during a crisis…

You’ll want to print out today’s essay and keep it close by.

Last year, my team and I conducted a deep-dive analysis in our International Speculator newsletter. We looked closely at the top resources to own leading up to, during, and after a financial crisis.

This information is critical right now, as we find ourselves in the middle of an economic crisis and a looming recession due to the coronavirus pandemic.

This may sound gloomy – and certainly part of the strategy in getting through a bear market or a crash involves positioning to protect your wealth from big losses.

But I’m also interested in the opportunities for major profits that might come in commodities as a result of a breakdown in the financial system.

And it’s the potential for such gains that makes a financial crash a little less frightening – and maybe even something to take advantage of.

So how exactly should we protect ourselves and profit from an emerging crash?

To find out, let’s look at how different metals have performed in past crises.

This showed us three things.

First, it showed which metals did well in the time just before a crisis. 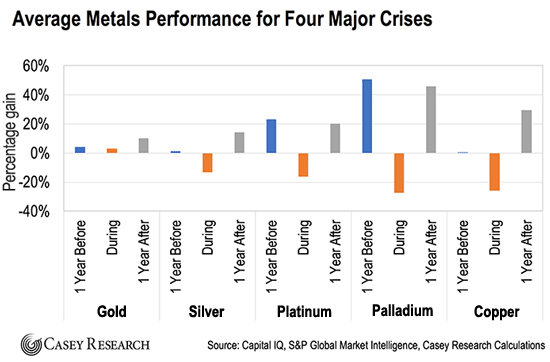 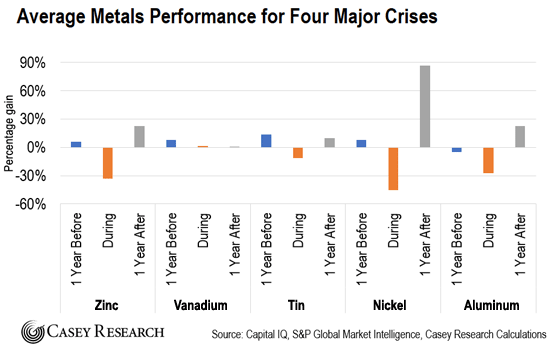 These are unprecedented times, and we’re still in the early stages of this crisis… so it’s too early to predict how each of these metals will hold up today. But by analyzing their performances during past crises, we can get a firm grasp of which commodities to keep our eye on.

Base metals can get hit hard during tough economic times. The data backs this up – during the last four crashes, the worst-performing metals have been aluminum, copper, zinc, and nickel.

One of the most interesting findings from our research: Minor base metals held up surprisingly well.

Both tin and vanadium delivered solid gains in the year prior to crises. But unlike the major base metals, which fell 25-45%, tin only dropped an average 12% during crashes – which was a better performance than precious metals silver, platinum, and palladium. Vanadium actually posted a 1% average gain during crashes.

Meanwhile, platinum and palladium both performed well in the year after a crash, rising 20% and more than 40%, respectively.

P.S. Keep this essay nearby… and shift your portfolio according to the historical performance of these metals as the market changes.

In the meantime, gold remains one of our top picks… and you can profit even more from the metal by holding the top gold companies. These are firms sitting on rich gold deposits with strong teams behind them.

I have a special way of pinpointing these projects… because I have exclusive access to a NASA satellite. Learn how I find gold from space right here.