Editor's note: Donald Trump is officially the president of the United States. But what happens now could change everything…in sudden, unexpected ways.

Today, we're featuring another important essay from Crisis Investing editor Nick Giambruno on this topic. On Wednesday, Nick said Trump could go down as the worst president…but it won't be his fault. Today, he gives more reasons why Trump is destined to fail…and what you should be watching closely today.

(Fortunately, there's a way you can prepare for what's about to go down. You can learn more in this urgent message.)

The establishment is setting up Donald Trump.

The mainstream media hates him. Hollywood hates him. The “Intellectual Yet Idiot” academia class hates him.

The CIA hates him. So does the rest of the Deep State, or the permanently entrenched “national security” bureaucracy.

They did everything possible to stop Trump from taking office. None of it worked. They fired all of their bullets, but he still wouldn’t go down.

Of course, the Deep State could still try to assassinate Trump. It’s obvious the possibility has crossed his mind. He’s taken the unusual step of supplementing his Secret Service protection with loyal private security.

The economy has been on life support since the 2008 financial crisis. The Fed has pumped it up with unprecedented amounts of “stimulus.” This has created enormous distortions and misallocations of capital that need to be flushed.

Think of the trillions of dollars in money printing programs—euphemistically called quantitative easing (QE) 1, 2, and 3.

Meanwhile, with zero and even negative interest rates in many countries, rates are the lowest they’ve been in 5,000 years of recorded human history.

This is not hyperbole. We’re really in uncharted territory. (Interest rates were never lower than 6% in ancient Greece, and ranged from 4% to over 12% in ancient Rome.)

The too-big-to-fail banks are even bigger than they were in 2008. They have more derivatives, and they’re much more dangerous.

If the Deep State wants to trigger a stock market collapse on par with 1929, it just has to pull the plug on the extraordinary life support measures it’s used since the last crisis.

It’s already baked in the cake. It’s just a matter of when they decide to trigger the controlled demolition.

Donald Trump is the perfect fall guy. And there are signs the Deep State is already starting to get its revenge.

The most important variable to watch is the Federal Reserve—the quintessential establishment institution. 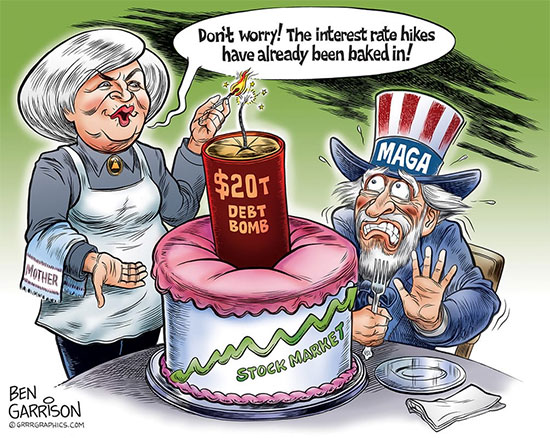 Even though most politicians, economists, and pundits in the mainstream media won’t admit it, central banks exist to help governments finance themselves, at the expense of the average man. It’s the hidden, but real, reason they exist.

The Fed accommodated Obama—effectively financing his regime’s deficits by creating new currency units. I doubt they will do Trump the same favor. And Trump will likely run up enormous deficits. Don’t forget about the $1 trillion in stimulus spending he has planned.

If the Fed doesn’t gobble up the debt used to finance Trump’s spending, it will only work to push up interest rates.

Manipulating interest rates to near 5,000-year lows is a crucial part of the life support system. Now the Fed is set to pull the plug and leave Trump holding the bag.

The Fed kept rates there until last month, when it raised them to 0.50%. It also announced it would accelerate rate hikes throughout 2017—three in total.

There’s a good chance the Fed will announce these rate hikes during the eight Federal Open Market Committee (FOMC) meetings it has scheduled in 2017.

I think some of these rate hikes will be much bigger than the 0.25% most expect. They could pull a series of 0.50% rate hikes… or go even bigger.

Anything greater than the normal 0.25% tempo would shock the market—and seem designed to hurt Trump.

The establishment will get its revenge on Trump. The Federal Reserve is its weapon of choice.

Trump seems aware of the situation. He recently said, “They’re keeping the rates down so that everything else doesn’t go down.”

He’s also said that “We have a very false economy” and the stock market is a “big, fat, ugly bubble.”

During the campaign, Trump called Fed Chair Janet Yellen “highly political.” He said the Fed should raise interest rates but won’t because of “political reasons.” (Raising rates before the election would have hurt Hillary Clinton.)

The mainstream media is another variable to watch.

It’s bizarre because Krugman, a die-hard Keynesian, had previously never seen a “stimulus” program he didn’t like. Once, he even advocated faking a space alien invasion to stimulate the economy. It shows that Krugman is not only a fool, but a hypocrite.

This is a clue.

I bet the rest of the mainstream financial media—CNBC, Bloomberg, The Economist, etc.—will morph from bullish cheerleaders into pessimistic doom-and-gloomers after Trump takes office.

Don’t expect them to find any “green shoots” after the market tanks on Trump’s watch.

All this is why what happens after Trump’s inauguration could change everything… in sudden, unexpected ways.

This is exactly why Doug Casey and I put together a time-sensitive video explaining how it could all go down.