I know many readers are concerned about gold prices moving along with the market these days.

Some of you have written in, saying things like:

It’s hard to watch positions go down. In February, global markets were super volatile. Most of them dropped over 20%, officially entering a bear zone.

This was a clear sign investors were cutting back on stocks and moving their assets. Gold was one of the first stops for them.

I don’t blame readers for being worried. I would be, too – without context. But in fact, I was very excited to see both the market and gold in red. And I’ll tell you why.

You see, over the past six months, readers of my International Speculator advisory have made some stellar gains on gold stocks, like 453% and 324%.

Looking at those gains, you might feel like you missed the boat, especially with gold’s performance during this market crash. But I’m here to tell you that now’s actually the perfect time to add exposure to gold… despite how mainstream investors are acting.

We’ve Seen This Before

At Casey Research, we always tout gold as a great way to weather volatility during a market crash. But when markets started falling in February, gold went south along with them. Doesn’t make a lot of sense, right?

Let me show you one chart… 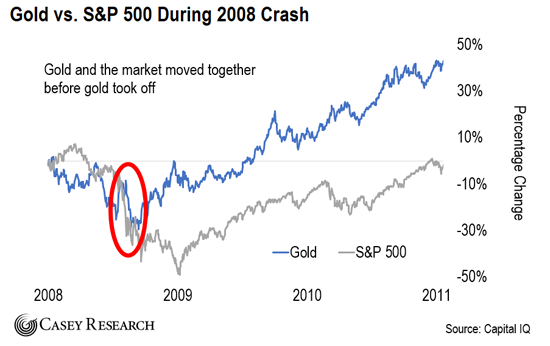 As you can see, before the collapse in 2008, equities and gold moved opposite each other, as they usually do. But then, a joint crash took place (highlighted in red), followed by a big separation and a rapid rise in gold prices. For the next few years, the yellow metal outshined the equity market.

And this is a pattern similar to what I saw recently. I can’t be certain that it will play out exactly the same way today. But history shows that during major crises, gold remains stable… and even gains 3% on average.

Gold stocks have outshined the market as well.

For example, the Dow has fallen 25% since late February. Compare that to the S&P/TSX Global Gold Index, a basket of gold mining stocks. While it fell just over 10% when coronavirus fears broke, it quickly recovered, gaining 10% in the first week of March while the Dow plummeted.

All told, even with the recent drop, gold stocks are handily outperforming mainstream stocks. Since February 19, gold stocks have beaten the Dow by over 12%.

Gold Is in the Driver’s Seat

One gold strength index we can look to is the gold-to-Dow ratio. It measures the ratio of the Dow to the price of gold. A higher ratio indicates stronger gold. 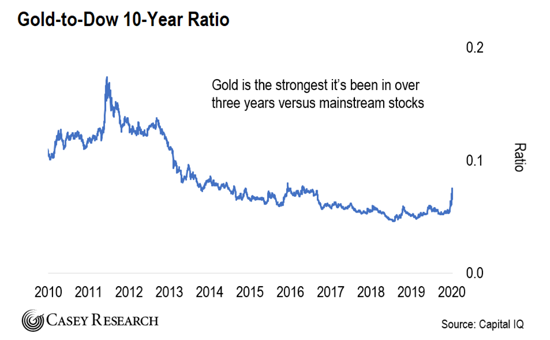 Over the last several years, the Dow has gained much faster than gold – driving the ratio relentlessly downward.

But at the far right, you can see how the recent sell-off in stocks has led to a spike in the ratio. In fact, gold is now the strongest it’s been in over three years, versus mainstream stocks. That “breakout” hints at an upward trend ahead. In fact, the ratio has been arcing upward since it bottomed in early 2019.

The chart below shows the gold-to-Dow ratio over a longer timeline, back to 1974. 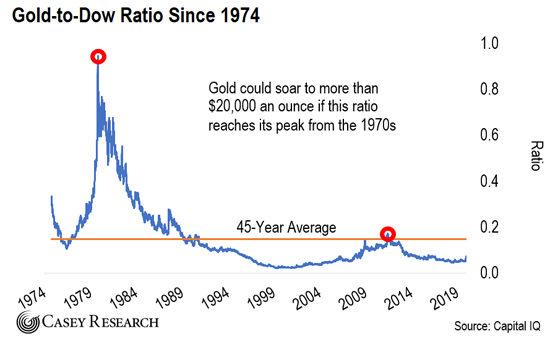 The current gold rally looks like a tiny blip compared with the bull run of 2002 to 2012, and the absolutely massive precious metals spike in the 1970s (both highlighted in red).

If that sounds insane, consider this: Before the last gold bull market started, back in 2001, gold was sitting at just $250. By the end of that upswing, it touched $1,900.

It may take a few weeks or even a few months for gold to regain its lost ground – each time it’s risen, it’s met with a wave of selling.

That’s because in crises, gold is often one of the only things with a bid. Everything else is being relentlessly liquidated. Investors start selling their gold because it’s the only thing they have left to sell. We saw this happen in 2008, and I strongly suspect the same thing is happening now.

But when gold does break through that wave of selling, it should quickly regain its losses. Back in 2008, it took less than 120 days for gold to recover all its losses from the financial panic and start setting new highs.

I expect the gold price, and associated stocks, to go much, much higher from here.

That’s why I’m not worrying too much about gold and gold miners getting beaten down in the recent market. Because I know it’s only a matter of time before they start to take off.

Instead, I see this as an opportunity to buy great names at pennies on the dollar. And you should, too.

Take this time to scope out picks, and grab some at bargain prices. An easy, one-click way to get exposure to a basket of gold stocks is the VanEck Vectors Gold Miners ETF (GDX).

That’s why I’m sleeping well, knowing that gold is still undervalued… and there’s a strong crisis growth potential on tap. So you have plenty of time to get positioned.

P.S. Even in the current drawdown, my gold picks are winning… In fact, we just saw a 37% gain in less than two weeks.

I have access to a NASA satellite, and an exclusive algorithm, that helps me find gold – from space.

See how you can take advantage of it right here.