Justin's note: Today, we’re handing the reins over to Bonner & Partners’ tech expert Jeff Brown. In his essay below, Jeff uncovers a little-known fact about Nikola Tesla—a brilliant inventor and visionary who was decades ahead of his time.

Right now, Jeff is focused on one of Tesla’s unfinished masterpieces—a revolutionary technology that is quickly becoming a reality today. Investors who position themselves now could soon reap windfall profits…

He stood a striking 6 feet 2 inches tall, quite unusual for his time.

Known for possessing a photographic memory and being capable of memorizing entire books, Nikola Tesla is remembered for transformational inventions such as the induction motor, electrical power distribution, fluorescent lights, wireless communications, and remote control of mechanical devices.

But of all of Tesla’s inventions, there was one that never saw the light of day. It was a revolutionary idea that had the potential to reshape our world in profound ways.

It was also an idea that was more than a century ahead of its time. But now, Tesla’s unfinished masterpiece is on the verge of becoming a reality.

In March 1901, Tesla received a $150,000 investment (approximately $4.1 million in today’s dollars) from one J. Pierpont Morgan (yes, that J.P. Morgan) in exchange for 51% of any wireless patents that might be produced from experiments at a place called Wardenclyffe.

Wardenclyffe was a facility about 10 miles away from Port Jefferson, NY, which is on Long Island. Tesla intended to use the facility to develop the technology to transmit wireless communications across the ocean to Europe.

This was exactly what J.P. Morgan invested in. Morgan wanted the technology so he could charge customers for wireless communications. With the funds from Morgan, Tesla constructed a quite unusual-looking tower for the time. 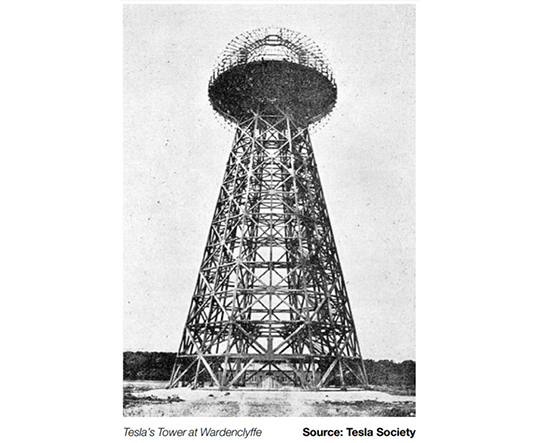 Unbeknownst to Morgan, Tesla wanted to use the tower to demonstrate wireless power distribution… on a very large scale.

Tesla’s vision incorporated many of his towers emitting energy throughout the atmosphere. This energy would be utilized by airplanes, automobiles, and even ships designed with special receiving devices to collect the wireless power.

On a large scale, this technology would have allowed ships to travel the seas without ever stopping to refuel. Planes could stay airborne indefinitely, constantly supplied with power from Tesla’s towers.

When Morgan discovered Tesla’s ulterior motive, the funding stopped. Eventually this led to the Wardenclyffe facility shutting down. The property was sold off to cover some of Tesla’s debts, and sadly, the historic Tesla Tower was torn down as well.

Tesla’s Work Is Becoming a Reality

But what many thought to be the ideas of a mad scientist 100 years ago, have become a reality today… As you already know, Tesla’s original idea of wireless communications has been with us for years. The mobile phone in your pocket is proof.

And while we may not be transmitting energy across the Atlantic Ocean, Tesla’s vision of wireless power distribution is happening now at a much closer range.

Behind the complex technology of wireless power distribution is something quite simple: the ability to charge your electronic devices without the need of a power cable for each device.

Imagine being able to come home after being out all day and setting your smartphone, your Bluetooth headset, your iPad/tablet, and your health tracker down on your desk next to your computer.

That’s it. Nothing to plug in, no cables to worry about, just set the devices down and they charge “magically.”

This possibility is not as far off as you think…

You see, on September 12, tech giant Apple is expected to release the newest version of its popular iPhone. And when Apple releases the iPhone 8, it almost certainly will include wireless charging as a feature.

But Apple is just the tip of the iceberg.

Since Apple released its very first iPhone in 2007, it’s been a trendsetter for other smartphone makers. Whatever new features Apple adds, others follow.

So when Apple releases wireless charging as a feature on the iPhone 8, the rest of the industry will copy it…

And the rest of the mobile phone market is much larger than Apple’s shipment volumes.

Wireless power distribution may start with cellphones… but after that, the technology will reach mass adoption.

Any consumer product that contains electronics will be a target for this technology. Wireless headphones, iPads, health tracking devices, and even “smart clothes” will all be able to charge up wirelessly.

This technology could even be used to continuously heat your morning cup of coffee so that it never gets cold.

The bottom line is that Tesla’s original idea of wireless power distribution may have been more than a century ahead of its time, but it’s quickly becoming a reality, not in the next few decades, but as early as next week.

And you may be wondering, how best to play this emerging trend?

There are several companies that will be a part of the wireless charging solution. A group I have been keeping my eye on has some of the best names in the power management semiconductor arena.

Companies like Analog Devices, Dialog Semiconductor, and Texas Instruments are some of my favorite key players. These three are ones I’ll be following very closely in the months and years ahead as Tesla’s unfinished masterpiece becomes the new reality.

P.S. When Apple unveils its iPhone 8 on September 12, I believe it will include wireless charging capabilities. But in order to pull this off, Apple will need the help of one company—a company that I’ve recently identified…

That’s right, I’m confident that I’ve found the one company that will make Apple’s wireless charging feature a reality. And when Apple makes its announcement next week, the price for this little-known small-cap stock could skyrocket. Get all the details right here.