Regular Dispatch readers know Nick believes gold is in the early innings of a historic bull market. And we’re on the cusp of a monetary shock that will only make it more attractive.

Recently, Nick uncovered a sinister plan by the U.S. government to confiscate everyday Americans’ wealth… and use COVID-19 as an excuse to cover up this cash grab. He put together this urgent briefing on how to protect yourself from this underhanded play, which you can access here.

Then, read on below to learn more about the coming storm…

Nick Giambruno: Hey Chris. I’m doing great. How about you?

Chris: I’m good. Are you still in Argentina?

Out of sheer luck and coincidence, I was here when the lockdown happened. I’m very fortunate to be in the ideal bug-out location.

Chris: I heard Argentina has very tough COVID restrictions. What’s it like? I know you’re probably quite removed from it where you are. But what about the rest of the country? How are they handling it down there?

Nick: Well, the restrictions vary from province to province.

I’m in the Salta Province. It’s in the northwest by the borders of Chile and Bolivia.

There haven’t been many cases here, but people are still pretty scared. While there are some restrictions, I can still go out. There’s plenty of food, plenty of wine, plenty of sunshine. I’m definitely not suffering here.

Tourism is suffering, too. This is a big tourist area with all the vineyards and so forth. So there’s no question that people are suffering. But it’s definitely not as strict as it is in the capital city.

You’re very familiar with Buenos Aires. I know you lived there. So this is a completely different area than the metropolis of Buenos Aires.

Chris: I was talking to a friend in Buenos Aires. She said it’s very strict there. She says it may be locked down until September.

Nick: Yes. I think that is the case. I would say at least until September. This whole thing’s been politicized. But that’s a whole ’nother ball of wax.

Chris: Right. I wanted to talk to you today because you’ve been writing about gold for a long time. And it’s definitely starting to work out as a trade. When did you start to put this gold rally on your readers’ radars?

Nick: Well, let me just say that I’ve always been a fan of gold.

I mean, it’s simply money. You just have to understand the basics. Gold isn’t a fad. It’s not a trade of the week or the flavor of the month that you might see on CNBC.

Gold is a free-market monetary good. It’s essential to think of it like that.

I saw a big gold bull market coming and alerted my readers to this in May of last year. The timing seems to have been pretty good. Gold has shot up since. And I expect it to go much higher for reasons we can discuss today. 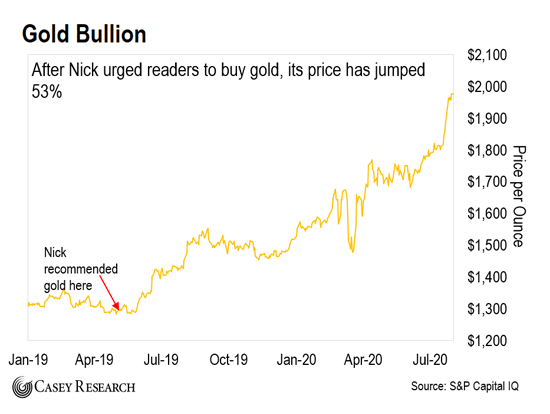 Chris: So let’s get into it. Obviously COVID-19 has happened. And it’s changing a lot of things in the markets. We’ve seen stocks crash and come back up. We’ve also seen gold start to take off almost as the stock market started to wobble.

Is that what you expected to happen? Is it the crisis-hedge nature of gold that’s coming out? Or is it something deeper?

Nick: Well, I think it’s both. Yes, it’s a crisis hedge. That’s the immediate thing. People see scary things going on in the world, and they go to gold.

And you’ve got to ask yourself, “Why do they go to gold? What makes gold attractive as a crisis hedge?”

Well, it’s been around as money for 5,000 years. It’s a non-political asset that is a free-market store of value. It’s probably the best store of value mankind has ever known.

But there’s another reason why people go to gold. I have repeatedly said that I think this gold bull market is not just a cyclical, garden-variety bull market.

All commodities are cyclical. They go through cycles. But I believe this is something different. Gold is riding on an enormous fundamental trend. Gold is coming back to the center of the international monetary system.

A lot of people have forgotten this. But gold was the foundation of international finance for hundreds… even thousands… of years. It’s only in the past 50 or so years that governments around the world – along with academics and bureaucrats – have tried to push an inferior competing monetary good – fiat currency.

Fiat currency is fake money that can be created in unlimited quantities. What we’re seeing is gold returning to its rightful role at the center of the international monetary system.

It’s coming back as money because this was always a futile effort of the inflationists, the statists, big-government types, and the Keynesians.

[John Maynard Keynes was a British economist and investor. During his lifetime (1883-1946) he was a household name. Keynes believed that money was a creature of the state. And that governments should spend more in times of crisis to boost demand.]

It was always a futile goal to try to force on the marketplace a fake, inferior good. It can’t go on forever. But I never would have thought it would have taken 50 years.

Argentine politicians try to do these kinds of tricks, too… pumping up their own currency with price controls. There’s a funny saying in Argentina, “It’s like trying to hide the sun.” In this case, the sun is gold. What we’re seeing is gold breaking through after 50 years of efforts to suppress it.

Gold contains properties that make it uniquely suitable as money. That’s why people voluntarily choose gold as money. There’s no way politicians will be able to suppress the individual actions of every person on the planet if they want to go to a superior form of money.

Nick: Yes. One of the biggest contradictions you’ll hear in mainstream finance is when they tell you, “Gold is not money. Gold is some kind of barbarous relic.”

But central banks and all the big players are loading up on as much gold as they can get their hands on. When you look at their actions instead of their words, it’s clear something else is going on. And central banks have been huge buyers of gold. 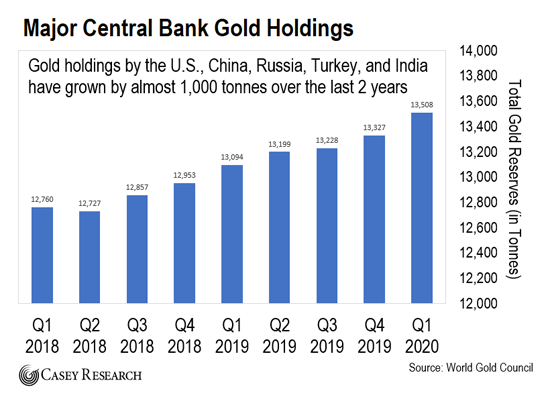 Secondly, we’re seeing all sorts of different kinds of arrangements where gold is being used to settle payments between different countries.

The example you mentioned with China is just one. It’s not directly a gold-backed. But it’s indirectly gold-backed.

Oil is, by far, the largest traded commodity in the world, by dollar volume. And the Chinese are, by far, the biggest oil importers. So they’re trying to offload their paper currency to buy oil. It’s like what the U.S. does with the dollar.

The Chinese have constructed this new futures contract. It allows producers to sell their oil to the largest consumer in the world – China. Or to anybody in the world, for that matter.

The infrastructure for this is domiciled in China and denominated in Chinese renminbi [China’s fiat currency]. But most folks don’t want to then hang on to renminbi – because that’s just another fiat currency run by a communist country.

It’s not considered a good store of value. Quite rightly. The Chinese government understands that people don’t want to hold a bunch of Chinese paper. And China also has the largest physical gold market.

So if an oil producer sells its oil on the Chinese futures contract in Chinese renminbi, they can take the renminbi they get from selling their oil. Then they can immediately put it into a physical gold market denominated in renminbi and take delivery of physical gold.

It’s a system that’s already set up. All the pieces are starting to come into place. We’ll see more and more things like that in the future.

Chris: I find it fascinating that money systems evolve over time. And often they change in dramatic fashion.

Nick: When there is a big change in the international monetary system, people who are smart and observant can see the signs before it happens. It’s very clear.

But the exact timing is not clear because governments want to take people by surprise. Otherwise, everybody would position themselves accordingly. And it wouldn’t be beneficial for governments to set it up in the new way.

When President Nixon de-linked the dollar from gold in August 1971, it came as a complete surprise. But it didn’t just happen with the so-called Nixon shock.

Looking back further, you also had FDR in the Great Depression deciding to confiscate and nationalize the private gold of American citizens – under very harsh penalties. That happened without warning… and overnight.

[In 1933, President Franklin D. Roosevelt signed Executive Order 6102. This made it illegal for Americans to own gold.]

These kinds of drastic changes in the international monetary system happen. And they happen immediately and without overt warning.

But if you can kind of see how the stars align, you can take action beforehand. And I predict an imminent and drastic change in the international monetary system.

We don’t know what that’s going to be or how exactly it’s going to play out. But it revolves around gold.

It’s what’s known as a hard asset. It’s not easy to produce. Politicians and central banks can’t just create it on a whim like they can with their other currencies.

But once they’ve destroyed their fiat currencies – which they look like they’re in the process of doing – they have to go back to something that’s trusted and has value.

That’s where gold will come in. We’re seeing the warning signs of an impending storm in the international monetary system.

There’s a lot to talk about there. Suffice it to say, there’s a shake-up coming in the not-so-distant future…

Rachel’s note: Keep an eye out for the second part of this conversation, due to hit your inbox this Friday. And in the meantime, go here to access Nick’s urgent briefing on the shake-up threatening everyday Americans’ savings… and how you can prepare.