As many times as we say it, some refuse to accept it.

Other things may seem to move the markets.

But that effect is always fleeting.

And right now, we can see if our claim is true.

Short answer: they are. And it exposes one of the major problems with buying big, supposedly “safe” large-cap stocks…

What Happens When Growth Stops?

The stock fell more than 7% in yesterday’s after-hours trading. Why? Because earnings were less than the company expected.

According to MarketWatch, the company had second-quarter earnings of $7.8 billion, about $15.12 per share, which is up from $10.30 per share a year ago. But sales only grew 27% to $113.1 billion from $88.9 billion a year ago. That missed expectations after previous quarters saw as much as 40% growth.

Analysts blamed the results on brick-and-mortar stores reopening across the U.S., taking away from Amazon’s e-commerce business. And what’s more, Amazon forecast that earnings for the current quarter would be less than expected, too.

That’s the trouble with a $1.8 trillion stock that’s still trading with a price-to-earnings (PE) ratio of nearly 70 times earnings.

Investors are paying for growth… and so they want growth. If the company doesn’t deliver enough growth, investors punish the stock.

And it’s one of the problems with buying big, “safe” stocks…

Look, we’re not taking anything away from Amazon as a business. The growth of the company and the stock has been incredible.

And we don’t mind saying that over the years, we’ve doubted it could keep growing. But it has. And who’s to say it won’t keep growing?

(By the way, do you remember when Apple became the first $1 trillion company? CNBC ran coverage of it showing each tick towards that level. These days, a trillion isn’t a big deal. Facebook (FB) hit that level earlier this month and pretty much nobody cared!)

The point we’re making here is that many investors fall into the trap of thinking big means safe. And when investors put money into “safe” stocks, they tend to invest more than they would for a smaller or “less safe” stock.

But if investors bought Amazon for growth, what will they do if the growth stops? The answer is, they may not hang around for long. This is why we prefer a different approach to investing.

A Different (and Better) Approach

That approach is the Casey “10 x 10” Approach. We’ve introduced this idea before.

Instead of making big bets on several big stocks, we prefer to make small bets on many small (or at least, smaller) stocks.

There are benefits for doing that.

That’s because when you’re backing small stocks, or stocks with built-in leverage (we’re talking about warrants here, which we’ve mentioned previously), you only need a handful of them to pay off in a big way to erase all your losers and make a profit.

Take one of the open positions in Dave Forest’s advisory Strategic Trader. To protect the integrity of Dave’s service, we won’t reveal the name of the stock. The warrant that he recommended to his readers last July is up an amazing 1,326%.

By contrast, the stock associated with that warrant is only up around 150%. You can see the comparative returns on the chart below: 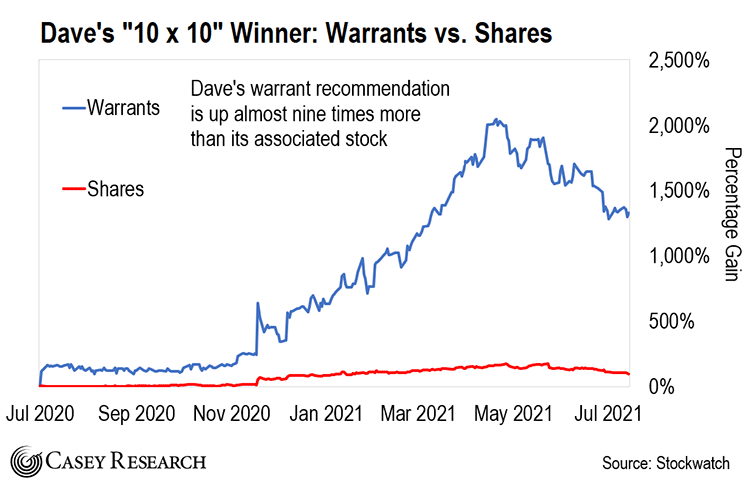 Now, we wouldn’t be telling you the full story if we didn’t acknowledge that warrants have different risks from plain old stocks. For a start, because they have built-in leverage, it means they can fall further if the market goes south.

See how this works?

In short, we’re not saying investors should dump all their big and “safe” large-cap stocks to invest in smaller plays. But we are saying that it makes sense to re-evaluate the risks you may be taking with those large-caps today.

Part of that re-evaluation could involve moving exposure away from some large-caps… putting most of the proceeds in cash or gold… and then allocating a small amount of that to warrant plays.

At least that way, if the market continues to move higher, you’ll still have exposure to it, but you’ll have much less of your money at risk.

Bottom line: If you even have the smallest fear that stocks could fall, now is the perfect time to take action… while stock prices are still high.

P.S. On that subject, make sure you check out Dave’s special presentation on his favorite “alternative” investment – warrants.

You can find it here. As we mentioned above, this warrants strategy has helped many of our readers collect high triple-digit and even quadruple-digit percentage gains.

These are incredible returns. Check out the full details here now.