Rachel’s note: Here at the Dispatch, we’re big on finding opportunities for you to protect – and grow – your wealth… in any sector. That’s why we like bitcoin.

And this week, bitcoin’s price surged past $50,000 for the first time.

Crisis Investing chief analyst Nick Giambruno saw this move coming. He’s been pounding the table on bitcoin for years. And he believes this rally is just beginning…

So today, we’re sharing a conversation between Nick and our colleague over at The Daily Cut, Chris Lowe. Read on for why bitcoin could emerge as the world’s dominant currency… and how it can protect your hard-earned savings… 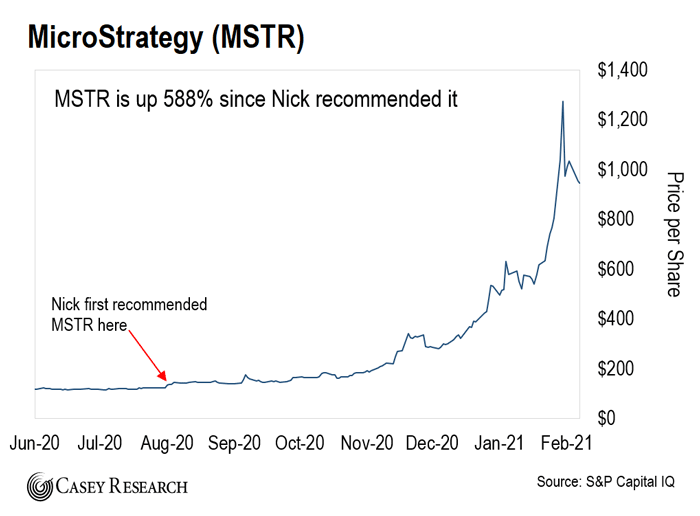 The software MicroStrategy makes has nothing to do with bitcoin… or the blockchain technology that underpins it. So what about MSTR caught your attention last summer?

Nick Giambruno: It was August 11, 2020, to be precise. That’s when Michael Saylor, the CEO of MicroStrategy, made a breakthrough announcement in a press release. It explained how the company had adopted bitcoin (BTC) as its primary cash reserve asset. It was a bold and pioneering move, and I think it will go down in financial history.

There’s a lot of confusion over bitcoin. Most folks don’t understand it. But when I read Saylor’s explanation of why he made the move, I immediately knew he had a sound understanding of bitcoin. Not just the technology, but also the economics.

He made it clear he was buying bitcoin as a sound money alternative to the U.S. dollar. As he put it in his press release:

Bitcoin is digital gold – harder, stronger, faster, and smarter than any money that has preceded it. We expect its value to accrete with advances in technology, expanding adoption, and the network effect that has fueled the rise of so many category killers in the modern era.

The next day, I recommended my subscribers buy MSTR. Not because of its business analytics software. I’m not interested in that at all. I recommended it because MSTR was the first public company to plug its balance sheet into bitcoin – an unstoppable emerging dominant monetary network. I knew this move would have a powerful effect on the value of the company. And that’s exactly what has happened.

Chris: For folks who are new to the conversation, can you unpack that? What’s the problem with keeping cash reserves in dollars?

So he put all the excess cash reserves he doesn’t need to pay for MicroStrategy’s operating expenses into bitcoin. He could have paid this dollar cash out as a dividend to shareholders. But then that capital would no longer be available to deploy in a way that adds value to the company.

Saylor hasn’t realized the gain on the bitcoin MicroStrategy bought. But in total, the company spent $1.1 billion buying bitcoin. That bitcoin is now worth $3.7 billion. So that’s an unrealized profit of $2.6 billion, which is roughly 64 times the company’s operating profits in 2020.

Saylor’s move into bitcoin has been far more lucrative than the underlying business of MSTR, in other words. He now has a huge pile of extra capital he can tap into if he wants to grow the business or make an acquisition.

It’s very smart. I think there will be an explosion of companies following his lead.

Chris: If the dollar is a melting ice cube, why isn’t bitcoin also melting?

Nick: The Federal Reserve can create as many new dollars as it likes, thus diluting each one’s value. That’s why the dollar has lost 84% of its value since 1971, when President Nixon severed its last link to gold. Ever since, the Fed has had no limit on how much it could inflate the money supply.

Bitcoin, on the other hand, is totally resistant to inflation. As I’ve been showing my readers, it’s the world’s hardest asset.

A lot of folks think a hard asset must be something tangible… such as a metal or real estate. But that’s not what hardness means. Hard, in this context, means hard to produce. That’s what makes hard assets resistant to inflation.

That’s why gold was the best money for thousands of years. It was the hardest thing for humans to inflate. Now, there’s bitcoin. It’s even harder to inflate than gold. No other asset is more resistant to inflation than bitcoin. That’s why it’s not a melting ice cube… because nobody can inflate its value away.

No matter how high the price of bitcoin goes, it can’t incentivize further production.

Chris: This is a critical point. And it’s one a lot of folks overlook. Without getting too far into the weeds, why can’t folks just rush out and produce more bitcoin if they see its price going up?

Nick: The thing you’ve got to grasp about bitcoin is that the rate at which new bitcoins enter the supply – their inflation rate, in other words – is governed by an unalterable protocol. And the rate is decreasing over time…

Let’s compare bitcoin with gold. The annual rate of increase in the supply of above-ground gold is about 1.7%. Bitcoin has a similar inflation rate right now. But unlike gold, the supply of new bitcoin gets cut in half every four years. This goes on until it reaches its hard cap of 21 million bitcoins.

There’s a euphemism central bankers use for digitally “printing” money. They call it quantitative easing. Well, here’s something that’s not a euphemism – bitcoin’s “halvings” are quantitative hardening.

Over time, this will cause more people and companies to follow Saylor’s lead. They’re going to dump their government confetti currencies and buy bitcoin to protect their buying power. There is no other asset in existence like bitcoin.

It’s important to clarify that none of the other 4,000 or so cryptocurrencies are genuinely scarce in the way bitcoin is. They all have key players, insiders, and development teams that can potentially act like central banks and increase the supply or change the rules if they choose to.

Chris: Against the backdrop of trillion-dollar stimulus bills and the most aggressive monetary easing by the Fed in history, it seems to me this is going to become more and more relevant.

Nick: That’s right. People flock to hard assets because they’re not inflatable and are better stores of value as a result. The more governments and central banks pump up the supply of their currencies, the more people are going to seek out inflation-resistant alternatives.

That’s why I’m such a big believer that the bitcoin rally is still in its early stages. You’re going to see many more corporations do what MicroStrategy and others have done… and plug their balance sheets into bitcoin. You’re even going to see nation-states do it.

Chris: What about individuals? Should they use bitcoin to protect against inflation, too?

Nick: Absolutely. That’s what I’ve been urging my readers to do. You don’t need to be a publicly traded company to do this. Anyone reading this can plug their personal balance sheet into bitcoin.

It doesn’t matter if you’re a doctor, plumber, freelancer, Uber driver… you can sweep your excess dollar savings into bitcoin. This allows you to front-run big corporations… and central banks… by going on a bitcoin standard yourself.

I hope more people do that. It’s a huge opportunity to profit, as bitcoin could potentially emerge as the world’s dominant form of money – what I like to call The Bitcoin Supremacy.

Chris: Thanks for talking with me today, Nick.

Rachel’s note: If you’re interested in learning more about bitcoin’s meteoric rise… and how it could become the world’s dominant money… be sure to check out Nick’s recent interview with Gold Newsletter here.