Dave Forest, editor of International Speculator, is one of the smartest guys I know. He’s a professional geologist with 20 years’ experience in the oil and gas, environmental, and mining sectors – so when he gets excited about an idea, we listen. Right now, he says you need to put a specific metal on your radar… As you’ll see, it’s setting up for an explosive price move…

For example, you might not think the rise of nationalism has much to do with the nickel price.

But in 2019, far-right nationalist sentiment might set nickel up for an explosive price move.

We’ve seen governments around the world elect right-wing leaders recently. Everyone knows the story in America, and Brazil just elected an ex-military man as president… who makes Trump look mild.

But one of the most radical leaders to come to power is in the Philippines. A man named Rodrigo Duterte has forged a violent, iron-fisted rule that most democracies on Earth have never seen.

How extreme is President Duterte? One of his main platforms during the 2016 presidential elections was to promise the extrajudicial killing of tens of thousands of drug dealers and other criminals. Basically, Duterte opened the floodgates for vigilante murder.

And this wasn’t an idle promise – while serving as mayor of Davao City between 1998 and 2016, it’s estimated that Duterte endorsed, or least allowed, some 1,400 street slayings of criminals.

The point is, this is a guy who doesn’t care for the rules – and has a history of pushing through radical reforms.

And his next target is the mining industry.

Duterte has never been a fan of mining. Almost from the get-go after he was elected president in June 2016, he went after the Philippines’ well-established mining companies – one of his first salvos being to appoint a staunch environmentalist named Regina Lopez as head of the Philippine Department of Environment and Natural Resources, the body that regulates mining.

Lopez immediately went on a rampage against the mining sector. She tried to institute a ban on all open-pit mining across the country – and instituted a comprehensive review of every operating mine that, for a while, threated to shut down most of the mining sector.

Other factions in the government eventually deposed Lopez and softened the impact of her review.

But now it looks like President Duterte is gearing up for another go at the mining sector.

During a speech in early October this year (given to ex-communist rebels), Duterte uttered the shocking words below. Remember, this is a direct quote from the president.

There is a law allowing mining here in the Philippines. I won’t intervene. That’s up to Congress. But after this election, there will be new faces. I will try to implement a total ban on mining.

A total ban on mining.

Duterte is referring to the 2019 midterm election. This means that if he holds support through that vote (he’s currently running a 75% approval rating), he plans to push for a complete stop to mining activity – of any kind – across the country.

A national mining ban might sound crazy, but it’s actually not unprecedented. In March 2017, the Central American nation of El Salvador became the first country on Earth to pass a complete, nationwide prohibition against mining.

Duterte is looking to do the same. And that would have huge implications for the global nickel price.

That’s because the Philippines is one of the most critical nickel-producing nations on the planet.

As the chart below shows, the Philippines was the world’s second-largest nickel producer in 2017. The country puts out 230,000 tonnes of nickel yearly – equivalent to 11% of global supply. 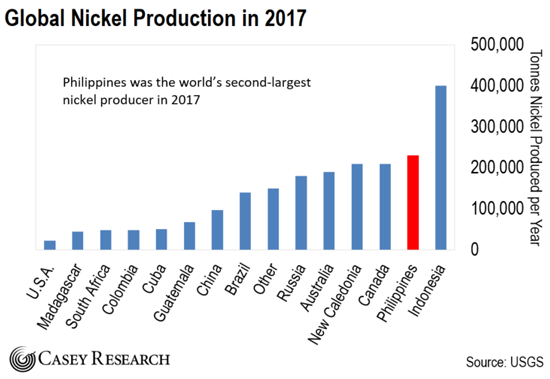 Imagine that output comes to a hard stop as a result of Duterte’s mining ban next year. That’s a big hole to fill for global nickel users – especially as demand from the electric vehicle battery sector ramps up.

This isn’t a story that’s getting much attention right now – but it could quickly turn into one of the most disruptive events the global mining industry has seen in decades.

To set yourself up for big profits as this trend gains momentum, consider adding nickel producers to your portfolio. Just keep in mind, nickel stocks are volatile. Never bet more money than you can afford to lose. It only takes a little to make a fortune in the years ahead.

P.S. I just released a new video presentation with more proof that nickel is about to soar from here. This isn’t something you’ll hear about from the mainstream media. As I’ll show you, a radical new technology is about to take down the world leader of electric vehicles…

And flood a tiny $2 stock with a massive windfall starting December 1. Click here to get all the details.

Are you already investing in nickel? Are you betting on other metals? Let us know which ones you believe will benefit the most during the electric vehicle revolution here: [email protected].