Rachel’s note: Here at the Dispatch, we focus on the best ways to protect, and grow, your wealth – in any sector. But we also like sharing interesting ideas from our friends and colleagues with explosive potential…

So today, we’re bringing you an essay from one of Palm Beach Research Group’s lead analysts, Greg Wilson. He works hand in hand with Teeka Tiwari, a former hedge fund manager who’s been called America’s No. 1 investor. And over the years, his research has brought extraordinary wealth to his readers.

That’s why we wanted to share his latest research with you today. You see, Teeka’s found a special kind of investment he calls “Tech Royalties.” And they’re not only capable of delivering life-changing gains – they can produce a steady stream of lifelong income, too.

He sees a catalyst ahead that will send this space into overdrive. That’s why he hosted his urgent briefing last week, where he covered all the details. Be sure to check out the special replay of his free event here… before these Tech Royalties go mainstream…

How would you like to take a $2 million investment and turn it into over $1 billion?

While it sounds far-fetched, it’s a true story.

That galactic return involved a special type of deal called a royalty.

Below I’ll share the story, and I’ll explain how a royalty can generate massive wealth.

But more importantly, I’ll clue you into a new type of royalty opportunity that not many know about today.

The $1 billion windfall investment started as a conversation between two investment execs.

You see, their company provided financing to projects in the resource sector, like drilling for copper or oil.

And on the oil side of the business, they had started doing the royalty deals I mentioned above.

A royalty is a straightforward deal. In exchange for investing in the oil company, the oil execs would give the investors a percentage of the production or production revenues for the project’s life.

The investors liked royalties for a few reasons. One is that you don’t need to take on the operational risk… the oil company does that. Another is that you could diversify by investing in multiple properties.

And finally, there was the upside. An oil company, for example, could expand its deposit with more exploration. And in turn, extend the life of production.

So they asked themselves, why not do it on the mining side?

Finding no reason not to, they made a gold royalty deal.

Pierre Lassonde and Seymour Schulich struck a $2 million deal on the Goldstrike property in Nevada.

If you’re familiar with resource investing, you may recognize the two as the founders of Franco-Nevada. It’s the leading gold-focused royalty company in the world today.

Barrick Gold, one of the largest gold miners in the world, took over the Goldstrike property in 1986. Since then, it has continued to expand and produce from the property.

That’s great for Franco-Nevada. It has a royalty deal on Goldstrike, so it’s benefitted the whole time.

And by 2014, it benefited to the tune of $1 billion-plus. (Goldstrike continues to make royalty payments to Franco-Nevada to this day.)

In other words, it was an instrumental deal that helped make Franco-Nevada what it is today.

And he’s right. Franco-Nevada is the largest royalty company in the world today. And while it hasn’t always been publicly traded, it’s done well for investors. 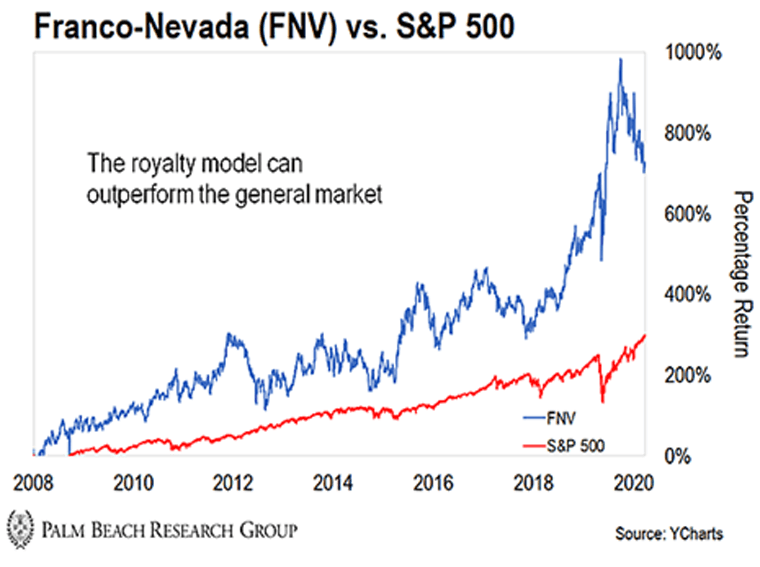 The question is, where can you find your own Goldstrike-type deal today?

The Next Frontier in Royalties

The answer lies in the new asset class of cryptocurrencies.

You see, many crypto projects pay out rewards. And by placing a stake in one of these projects, you can set yourself up for a steady stream of income, just like a royalty.

Plus, you get the same benefits as above… and more.

You won’t be taking on operational risk. Recall that when Franco-Nevada invests in a mine, it doesn’t have to worry about running a mine. It just needs to keep track of its investment. Likewise, you don’t need to worry about the development of the crypto project.

You can diversify like Franco-Nevada as well. Franco-Nevada holds investments in nearly 400 properties. With crypto projects, you can easily find a number that suits your diversification needs.

That means crypto rewards appreciate at the same rate as the tokens themselves. For example, let’s say you buy a token that gives you a starting yield of 10%. Then it goes up 200%. Since you’re paid rewards in the same token, your yield jumps to 30%.

The second form of rewards is through project expansion. In some cases, a blockchain will add other protocols to its ecosystem. And the new protocol will distribute its tokens to those who have stakes in the original blockchain.

It’s like a bonus reward. But you only get it if you have a stake in the game.

The Future of Royalties

This new way to invest in cryptos is something we call “Tech Royalties.” It’s the future of royalties.

Even if you could find the next Goldstrike deal, could you take part in it? Probably not.

That’s why crypto is the future for investments like these. It’s open, decentralized, and anyone can join.

During this special training event, we show how you can take part in the extraordinary gains delivered from Tech Royalties.

That’s the power of Tech Royalties. Not only do they generate double-digit income streams… they can also create quadruple-digit returns.

And Teeka will show you how to get started on your very own Tech Royalty retirement plan.

Plus, he reveals how you can use Tech Royalties to profit from the most anticipated IPO of 2021.

So I encourage you to click here to watch the replay of the big event. It’ll explain everything you need to know to get started using Tech Royalties.

P.S. As a bonus, Teeka also gives you – for free – the name and ticker of our No. 1 long-term Tech Royalty during the summit – just for attending.