How can you tell if the market has hit the bottom?

Not until after the fact, anyway.

Sure, you can make a guess.

You can use all your analytical skills – fundamental and technical.

But it’s not until today becomes history that you know for sure.

So, have we hit the market’s bottom?

Today, we’ll try to help you figure that out. Read on…

Despite the big falls this month (September is historically the worst month of the year for stocks), we are asking ourselves if this might be the perfect opportunity to buy rather than sell.

This Shouldn’t Surprise You One Bit

September is a bad month for stocks. We’ve explained that for the past three weeks.

Furthermore, there hasn’t really been any news to justify the market sell-off. Not enough for it to result in any kind of dangerous slump.

Sure, there has been “bad” news… and “scary” looking news. Although, that depends on how you define “bad” and “scary.” For instance, the iron ore price has halved over the past four months.

That’s bad news for the world’s big iron ore companies, like BHP Group (BBL) and Vale S.A. (VALE). They are down 27% and 30%, respectively, since late May.

But even if that’s so, it hasn’t been reflected in the stock prices yet. U.S. Steel has fallen over the past four months (down 24%). In the past few days alone, it’s down 15%.

If you were frustrated last month that stock prices were too expensive to buy… perhaps now you’ll like getting them at a cheaper price.

But the lower iron ore price isn’t the only “bad” news. In China, one of the country’s biggest property developers, China Evergrande Group, is on the verge of collapse.

To appreciate the scale of the developer’s business, Bloomberg notes:

Construction of unfinished properties with enough floor space to cover three-fourths of Manhattan grinds to a halt, leaving more than a million homebuyers in limbo.

That’s a lot of floor space.

According to the report, Evergrande has $300 billion of debt, too.

And that’s a lot of debt.

That’s how markets work, right? And maybe – just maybe – it won’t need any kind of central bank or government intervention at all.

Look, we’re not foolish enough to believe that current high asset prices are the results of the free market in action.

No one in their right mind could think that.

But things are a lot different today than they were in the past. Back in 2008, central banks and governments weren’t sure they could get away with the things they did – the crazy level of money-printing and government debt.

For them, it was a risk. They put their reputations on the line, hoping that the public would fall for it.

The public did fall for it.

And since then, governments and central banks have made the most of it. Not just in the U.S., but in Europe, the U.K., and China. They’ve all realized there may be no limit to what they can get away with doing.

But check out the following chart of U.S. 10-year bond yields: 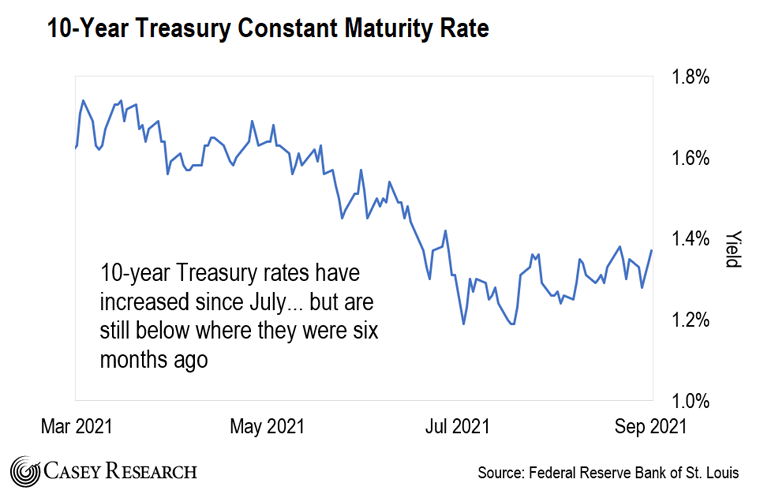 This is a six-month chart. Rates have increased since late July. But they are still well below where they were six months ago.

As for earnings, we haven’t seen any credible reporting that suggests company earnings have peaked.

Again, we’re not saying this is our favorite kind of market. Like you, we know the whole world’s economy is built on cheap money… and government and central bank meddling.

But we’re not interested in sitting on the sidelines yapping. Our goal is to help you make the most of the market we have. If you have an objection to investing in manipulated markets, we’ve got some bad news for you…

You’ve just got to get used to it. The important point is to understand that it’s happening and take action. In our view, that means using volatile periods like we’ve seen over the past few weeks to your advantage.

As we mentioned at the top, we can’t be sure this is the bottom of the market. But we do know that there are a lot of stocks that are cheaper today than they were four weeks ago.

To us, that presents a great opportunity. You should see it that way, too.

P.S. There’s one man that knows best how to protect your wealth – and family – in a disturbing market environment… and that’s senior analyst Dave Forest. He’s got some of the best plays to take advantage of this market. Check out what you should do right here.

Don’t Buy Yet: This Big Bargain Stock Is Set to Get Cheaper…

Today’s edition of Chart Watch will continue the theme of September being a historically tough month for markets. We saw further proof of that in yesterday’s market.

While some investors approach September with a very defensive mindset, others are eager to hunt for bargains.

Of course, it’s not as simple as favoring one of these strategies over the other.

To drive this point home, we’ll look at Freeport-McMoRan (FCX), one of the world’s largest publicly traded copper producers.

Copper is a commodity that we continue to be bullish about here at Casey Research.

The red metal is currently trading about 13% off its highs for the year. This means that a copper miner stock would likely also be trading off its highs. In the case of FCX, the stock is currently down about 28% from its 2021 high of $46.10.

And while my analysis of the stock tells me it will eventually return to its previous highs, it’s not a bargain buy just yet.

Let’s look at the price chart to see why. 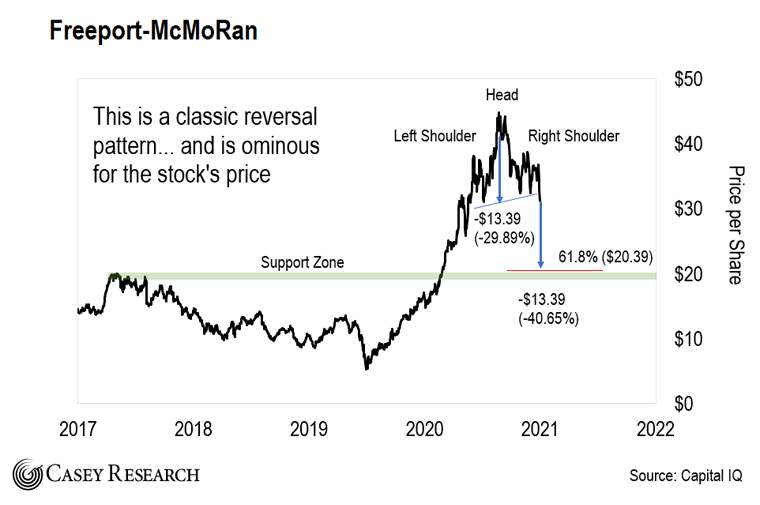 The head and shoulders chart pattern that FCX has traced out is very ominous for the stock’s immediate prospects.

A head and shoulders is a classic reversal pattern and this one is about as textbook as they come.

The key to spotting this pattern on a price chart is to look for its three distinctive features: a left shoulder, the head, and the right shoulder.

Once you have identified the pattern, you should then draw the neckline, which is a simple trendline connecting the base of both shoulders. You can see all these labeled on the chart.

If prices breach the neckline, then you can consider the pattern to be complete, which is exactly what has happened with FCX so far. But the selling pressure may not be over yet.

I expect a further sell-off in the stock that could see it fall to $20.39. This is both the 61.8% Fibonacci retracement of the rally from the lows of 2020 as well as a support level based off the yearly high of 2018. [Note: Remember we briefly discussed Fibonacci retracements last week.]

If I’m right on this chart analysis, then buying Freeport-McMoRan at current prices would be a big mistake… even though it might seem like it’s trading at a bit of a discount.

But after this sell-off concludes, I would then expect the stock to take another run into the $40- $44 range – a potential double, if it all plays out as I expect.

As always, I’ll keep an eye on this stock and will update you on the progress as the price action continues to develop.