That’s how much I made on a bet recently at a bar on the south side of Pittsburgh.

I wagered my money on a football game, but I didn’t bet on the Pittsburgh Steelers… or any other NFL team.

My bet wasn’t on your typical sports team. In fact, the team had no real players and no hometown stadium… because it wasn’t a real football team. And it wasn’t playing in a real game.

Instead, I wagered my money on a simulation of a football game… with fictional teams and randomly generated outcomes.

I went to this bar and bet on this game because I wanted a firsthand look at one of today’s biggest trends: virtual sports betting.

Like I said above, in virtual sports, there are no human players, no stadiums, and no hometown teams. The game is pure chance. It’s a computer-generated simulation that you can bet on.

Instead of using a bookie, I used the Xpress Virtual Sports machine that was in the Pittsburgh bar.

Every five minutes, there’s a virtual football game with randomly generated outcomes. Bettors make “prop,” or proposition, bets. It’s a side bet on anything other than the final outcome of the game.

To test it out myself, I made five prop bets on a game for $1 each. 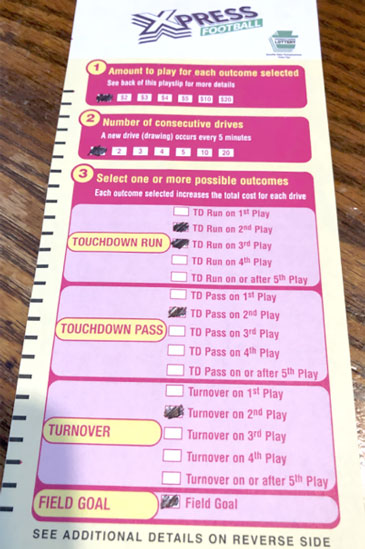 After I placed my bets, a countdown clock on the TV above the bar let me know the game started in 29 seconds. Soon enough, the “Bobcats” and the “Diablos” popped up on the screen, with their stats listed as the seconds ticked down. Then, the game started. 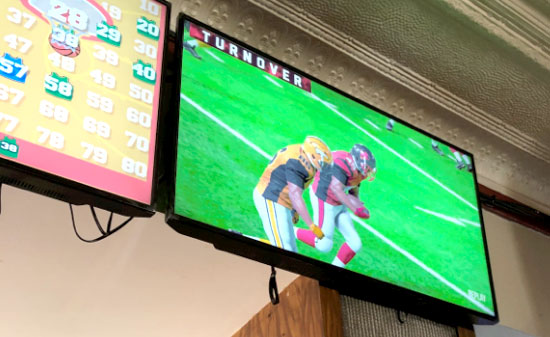 The bar has three TVs dedicated to virtual sports

The first play was incomplete. On the second play, the Bobcats’ quarterback threw an interception. As you can see on the betting slip above, I bet $1 that there would be a turnover pass on the second play of the game.

Regular Dispatch readers know I’ve been covering this industry since the Supreme Court gave states the right to license sports betting in May 2018.

Today, 20 states have legalized sports betting. American Gaming Association (AGA) CEO Bill Miller expects that number could hit 30 by 2021. States are eager to capitalize on this because they can tax legal sports betting and generate new revenue.

Research from the AGA estimates that illegal sports betting is worth $150 billion a year. Excluding Nevada, revenue from lawful sports betting was effectively $0 just two years ago.

Now that more states are joining the legalization trend, I expect the overall legal betting industry to hit $250 billion in the next few years…

To get an idea of how fast this type of industry takes off, look at New Jersey. The state moved quickly after the Supreme Court decision. According to Play NJ, gamblers wagered $16 million on sports in June 2018. Just six months later, that number was $330 million. That’s a 20-fold increase in half a year.

States tend to follow each other when it comes to new sources of tax revenue. It won’t be long before most offer virtual sports betting, just as we’re seeing traditional sports betting gain steam as well.

Now, there are plenty of good investment opportunities in traditional sports betting. But even people investing in this overall trend are overlooking the rise of virtual sports… which means getting in early gives us more upside as they take off.

Virtual sports betting could be as common as Powerball or scratch-off lottery tickets in the coming years. And now’s the time to take advantage.

The Best Way to Bet on This Trend

Although it’s good for research, instead of betting on virtual football games, we’re more interested in betting on the companies providing the software and services that make virtual sports betting happen.

These are mostly small, up-and-coming companies without much name recognition. And as I said before, that means as the industry takes off, they’ll have much bigger upside.

The best way we can capitalize is by using “Omega Shares”…

They’re a hidden security that most investors don’t know about. But they’re as easy to trade as common stock. And they offer far better returns.

So if you can find a quality “Omega Share” on a company at the center of the next megatrend (like virtual sports)… then you’ve struck gold.

That’s why I shared all the details in a special presentation on “Omega Shares” last week, as well as my top picks that will benefit from several emerging megatrends… including my #1 virtual sports play.

If you missed it, you can watch it online here. But hurry – this will be taken down soon.