Justin’s note: Today, I hand the reins to Crisis Investing editor Nick Giambruno again, who has an important update on the cannabis sector. (If you missed his essay earlier this month, make sure to catch up here.)

Below, Nick focuses on the big opportunity developing around America’s forgotten cash crop. Outlawed since 1937, the federal government has essentially killed this industry.

But as Nick explains, that’s all about to change…

In today’s essay, I’m going to show you another milestone on the road to the full legalization of cannabis in the U.S.

It centers around one of America’s forgotten cash crops…

The applications for this crop greatly exceed those of regular cannabis. And the potential upside is almost impossible to calculate.

I’ll explain all the details about this big opportunity in a moment. But first, let me back up and explain what hemp is.

Hemp and marijuana are from the same plant species, Cannabis sativa. They look similar, which leads to some confusion. But hemp and the type of cannabis that people smoke have different chemical compositions. 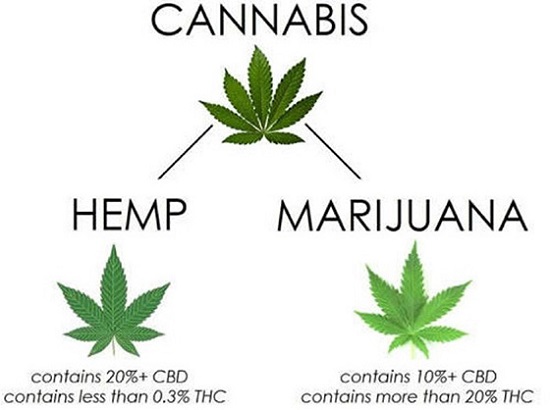 The cannabis plant contains over 100 different cannabinoids. These are chemical compounds that react with cannabinoid receptors in the nervous and immune systems.

The two most common cannabinoids are THC (tetrahydrocannabinol) and CBD (cannabidiol). Regular cannabis contains a lot of THC. That’s the chemical that gets you “high” when you ingest it.

Hemp, on the other hand, has almost no THC. It’s next to impossible to get high from smoking it. But it’s high in CBD, which has medicinal properties and no intoxicating effects.

CBD has been proven to help epileptics control and reduce the number of seizures they have. That’s according to two peer-reviewed studies published in The New England Journal of Medicine and The Lancet.

Earlier this month in the Dispatch, I showed you the remarkable story of Charlotte Figi. After only one day of treatment using CBD oils, Charlotte went from having 40 seizures every day to going a week without one.

Charlotte is 11 now. She still takes daily CBD treatments. She still has some seizures. But they aren’t as frequent or as severe as they were before she started her CBD treatments. Today, she can eat, walk, talk, and live a mostly normal life.

However, even with all of these incredible benefits, the feds don’t see the big picture…

Why the Feds Have it All Wrong

Even though hemp has next to no THC, it’s a strain of the cannabis plant. So the feds still classify it—along with regular cannabis, heroin, LSD, ecstasy, and peyote—as a Schedule I substance. It’s still illegal at the federal level in the U.S. to grow the hemp plant from which CBD oil is extracted.

It’s ridiculous. Even if you buy the argument that high-THC cannabis should be illegal—which I don’t—it makes no sense to outlaw hemp as well. Nobody is getting high on hemp. But the CBD it contains is helping people like Charlotte Figi escape the hell of severe epilepsy.

Now, hemp wasn’t always illegal. U.S. Presidents George Washington and Thomas Jefferson both cultivated it. And it used to be one of the main cash crops that American farmers grew for more than a century.

Congress treated hemp like any other agricultural commodity until it passed the Marihuana Tax Act of 1937. Cannabis prohibitionist Henry Anslinger, the first commissioner of the U.S. Treasury Department’s Federal Bureau of Narcotics, drafted it. His bill put punitive taxes on hemp and cannabis production… and made it illegal to be in possession of either without a license.

The feds temporarily lifted these restrictions in 1942. At the time, the industrial fibers used to produce rope, cords, and cloth were in short supply. The feds wanted farmers to grow as much hemp as possible to support the U.S. military in World War II.

The U.S. Department of Agriculture even produced a movie called Hemp for Victory explaining the benefits of hemp cultivation to farmers. It also highlighted the history of hemp and hemp products as well as the best hemp-growing practices.

Obviously, the government was aware of hemp’s industrial uses. But it reinstituted the effective prohibition of hemp after the war ended.

That growing hemp is still illegal today—despite its medical and non-medical applications—is one of the most boneheaded things the government has ever done.

In fact, nearly $700 million worth of hemp-based goods is already sold in the U.S. every year. These products are made with hemp imported from China and Canada… where it’s been legal to grow hemp since 1998.

It’s one of those odd legal loopholes. You can’t grow hemp in the U.S., but you can import certain parts of the hemp plant.

Why Hemp Will Soon Be Legalized in the U.S.

In April, Senate Majority Leader Mitch McConnell submitted a bill to the Senate that would take hemp off the list of Schedule I drugs and classify it as what it really is—an agricultural commodity.

The proposal was part of a larger farm bill the Senate voted on in June. The bill passed by a landslide 86–11 votes. Now it goes to the House, which will vote on it before it goes to President Trump’s desk to be signed.

Once the bill passes into law, it will end the decades-long ban on hemp.

You may be wondering, why now?

For starters, farmers are pushing for it—hard. The main reason McConnell introduced the bill is because farmers in his home state of Kentucky have been lobbying for it.

Kentucky is a largely agricultural state. The total economic output from farming in Kentucky is about $45 billion. That’s about one-quarter of the state’s annual output.

Tobacco was Kentucky’s staple crop. But today, it accounts for only about 5% of the state’s agricultural output. Farmers in Kentucky are hoping that hemp will be a new cash crop.

Remember also that the trade war between the U.S. and China has hit American farmers hard. For instance, American soy farmers now have to pay a 25% tariff on soybean exports to China—their biggest market.

As a result, farmers are looking at a new cash crop and lobbying to have hemp reclassified as an agricultural commodity so they can start growing it without fear of legal repercussions.

How Big the Market for Legal Hemp Is in the U.S.

Americans already spend more than $700 million on products that contain hemp every year… See the graph below for the breakdown. 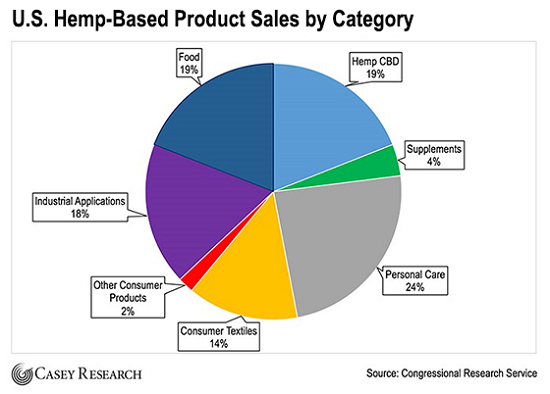 But that’s just a snapshot of where the market is right now. Once the government legalizes hemp, drugmakers will be able to openly research other uses of CBD.

There’s no telling what medical treatments they’ll develop. What we can be sure of is that all of this will increase demand for CBD and the plant it’s extracted from—hemp.

According to the Pew Research Center, 61% of Americans now believe cannabis should be legal. That’s up from 12% in 1969. 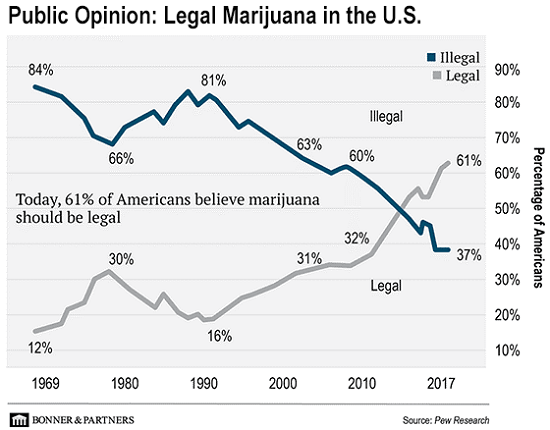 Members of Congress have no upside from opposing this bill. And I fully expect President Trump to sign the bill when it gets to his desk.

So we know Trump has a willingness to side with the legal cannabis industry. And we know he’ll want to help farmers that have been hurt by the trade war. I have little doubt Trump will sign the bill legalizing hemp.

And by the way, Sessions says he won’t oppose the hemp legalization bill. So I don’t see anything stopping its passage.

How You Can Gain Exposure to Legal Hemp Stocks

You must remember to be cautious when investing in legal hemp and cannabis stocks. Some of them are quality companies. But there are also plenty of bad actors out there trying to ride a wave of the mania.

But there is one way to gain exposure to this trend without putting your money into penny stocks.

Tobacco companies are starting to get on board with hemp and CBD. For example, late last year, Alliance One International (AOI)—a global contractor, processor, and supplier of tobacco—bought a 40% stake in North Carolina-based hemp producer Criticality for $10 million. Criticality is one of 10 licensed producers of hemp in the U.S., protected by a state-approved pilot program for growing hemp.

Alliance One also bought two Canadian cannabis cultivation companies in January. One of them is Island Garden, one of three licensed producers of cannabis that will supply Prince Edward Island in Canada. The second company, Goldleaf Pharm, is applying to become a licensed cannabis grower in Ontario, Canada.

These moves suggest that Alliance One is moving rapidly into the legal cannabis market. And with the looming legalization of hemp in the U.S., and legal marijuana in Canada, I expect these acquisitions to pay off for the company.

P.S. I just released a brand-new video presentation that reveals another big reason to invest in the marijuana sector today—one that you won’t hear about anywhere else.

You see, until now, 99% of the largest hedge funds and banks wouldn’t touch pot. That’s about to change… The “Trillion Dollar Mainstream Marijuana Takeover” begins as soon as November 6.

Thank you for the opportunity to respond. I agree that Alex Jones has been censored by companies that are eating out the substance of our youth. Facebook is not a good idea but most do not understand war, our history of war, or our history in general, and therefore if we do not have more Trumpsters in 2020, we are bound to repeat the past history… so leave what time in history to your imagination…

China is opening the largest factory in world history. Its sole purpose is to produce one specific device—the same device set to power the 21st century.

It requires an enormous amount of raw materials—as much as 1,073x the world’s current stockpile—every single year.

The companies that supply these materials to China are about to be in high demand—in fact, one small company could have its entire deposit bought out, shooting its $1 stock through the roof. 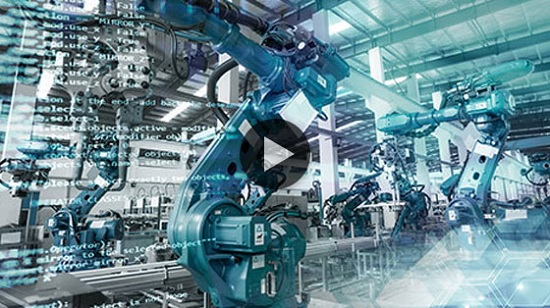