As our colleague Teeka Tiwari explains below, this anxiety is normal. He spent years on Wall Street as a money manager. And saw firsthand how elections can cause extreme waves.

Luckily, Teeka’s discovered a way to get around these unpredictable moves. He calls it an “Anomaly Window”… and you can use it to generate life-changing wealth in just 28 days.

That’s why on Thursday, he held an urgent presentation. He went into all the details of this rare event… and even revealed his top 3 stocks to trade. Just go right here to access the replay, before this window closes…

My guts were turning inside out. My clients were losing millions as the market carnage rained down on me.

I hadn’t taken big risks. In fact, I owned some of the safest, most reliable stocks in the world. And we’d been having a great run…

But then, the country elected Bill Clinton as president. And his run for the White House created a political firestorm over drug stocks.

You see, one of his major campaign promises was to introduce nationalized health care. That meant price caps for all the major drug companies.

Before he even took his first oath of office, the entire pharmaceutical sector started collapsing.

Blue chips like Johnson & Johnson, GlaxoSmithKline, Bristol-Myers Squibb, Pfizer, and Merck were in a freefall leading up to the election. My clients’ portfolios were stuffed with these names.

I spent my days fielding angry calls, begging people not to sell.

Even though I was barely 20, I felt like my career was already over. But unlike most people, I had been investing since age 13. And I was a professional money manager by 18.

So I had learned a few things over the years… and one of the most important was the power of investor sentiment.

The Market Moves in Waves

I realized investor sentiment moves in waves. It goes from extreme euphoria (greed) to extreme depression (fear). As sentiment bounces between greed and fear, stock prices gyrate wildly – regardless of the quality of the underlying business.

The companies I owned were great. They were still earning money hand over fist. I just had the misfortune of being caught in an investor sentiment downcycle.

I knew if I could convince my clients to hang in there, sentiment would again shift in our favor. And that’s exactly what happened…

Take a look at this chart. It shows the average return of the health care giants we mentioned previously, like Johnson & Johnson and Pfizer, over the course of the 1992 election… 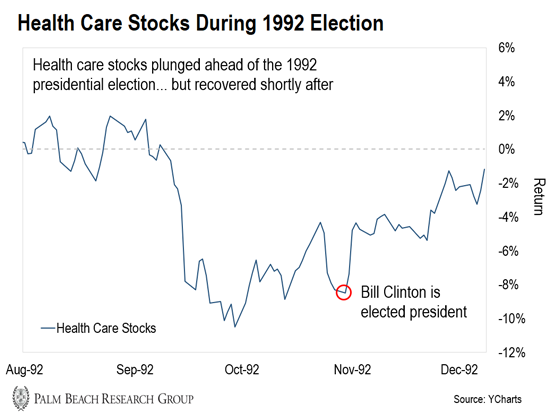 While shares of these stocks fell ahead of his election… after Clinton won, the health care sector suddenly shifted.

By the new year, health care stocks had clawed back almost all of their losses.

So what does that all mean to you?

This Anxiety Is Normal

Presidential elections raise anxiety on Wall Street. We saw that in 1992 with the Clinton campaign’s effect on the pharmaceutical sector.

So what causes these market gyrations?

As I mentioned above, it’s investor sentiment. And we see it rip through the stock market ahead of every election.

Take the 2016 presidential campaign, for example.

This time, Hillary Clinton faced off against Donald Trump. And both candidates berated and threatened the drug sector during the campaign. That led to a broad decline in share prices.

It was a classic “bottom of the fear curve” investment. That’s why I argued the worst-case scenario was fully priced in. The news couldn’t get any worse.

After bottoming out during the 2016 election, IBB and XBI quickly recovered their losses and recently hit new highs.

What’s Going to Happen Next?

If we follow the script from elections past, a sector or even a handful of sectors are going to get slammed over one worry or another. Just like in 1992 and again in 2016, we’ll have massive opportunities to profit from the volatility ahead.

But what I am most interested about right now is not the election. Over the last few years, I’ve been studying a rare “Anomaly Window” that appears every few years. I thought it was just random, but I’ve discovered proof that it’s linked to a predictable date.

What’s special about this “Anomaly Window” is that while this window is open, certain blue-chip stocks experience insane moves.

Inside this window, the rules of wealth-building change.

It turns boring, stalwart companies into some of the most profitable stocks in the market. Banks, airlines, and even mining companies that spend years trading sideways suddenly offer investors outsized returns.

Looking at past Anomaly Window periods, you could’ve made huge gains on blue-chip stocks, like 472% on Citigroup, 882% on United, and 614% on mining company Newmont.

This window usually lasts just 28 days. It’s so urgent that I held a special event, 28 Days To Your American Dream, to tell you all about it.

To make sure it’s worth your while, I gave away my entire list of 30 elite stocks to trade during this window.

You don’t have to know who’s going to win the election… or what new policies will disrupt the markets in 2021 to profit.

All you have to do is go right here to watch the replay of my urgent presentation.