The system was flawed. The more they printed, the more it hurt.

As artist George Grosz described it:

Lingering at shop windows was a luxury because shopping had to be done immediately. Even an additional minute could mean an increase in price. One had to buy quickly.

Such was life in Germany in the early 1920s. Saddled with debt after the Treaty of Versailles ended World War I, Germany had no choice but to try and print its way out. Eventually, things spiraled out of control. 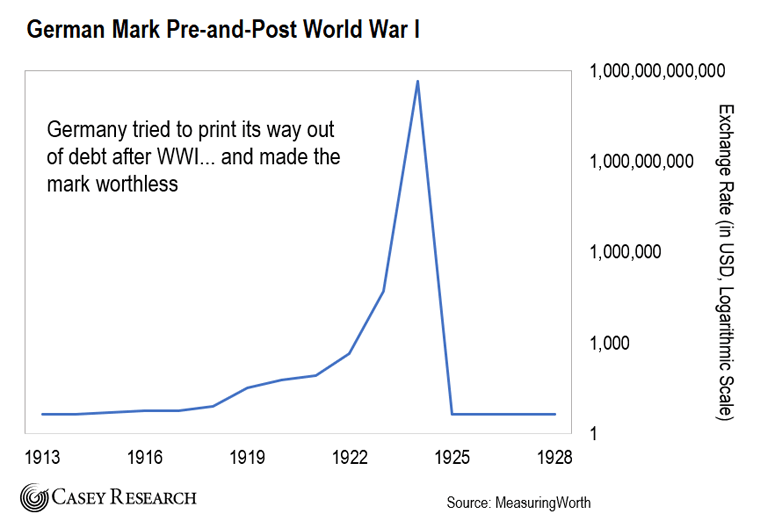 Life was brutal… unless you were Hugo Stinnes.

Stinnes was born in 1870 to a family that owned a modest coal mining business. After his father died in 1890, he inherited the business with an eye toward the future.

Over time, he expanded to include his own shipyard and had ships trading all throughout Europe. By any measure, he was very successful.

But Hugo was also cunning. He saw the writing on the wall.

After the war, he realized the increase in German money supply was bad news. He knew it would ultimately result in a loss of purchasing power.

Everything he’d worked hard for over the years was at stake.

So he did the unthinkable. He borrowed an insane amount of money in Papiermarks, then turned around and used that money to buy hard assets.

Hugo figured out these hard assets – like mines and real estate – would increase in value while his paper money became worthless.

All he had to do was wait.

In the meantime, he would pay off his debt with the worthless paper money. His hard assets provided him an income and increased in value relative to that paper money.

It was a brilliant move. And it made him the richest man in Germany.

It also earned him the title “Inflationskönig” or “Inflation King.” He was so famous that in 1923, Time magazine called him “The New Emperor of Germany.” 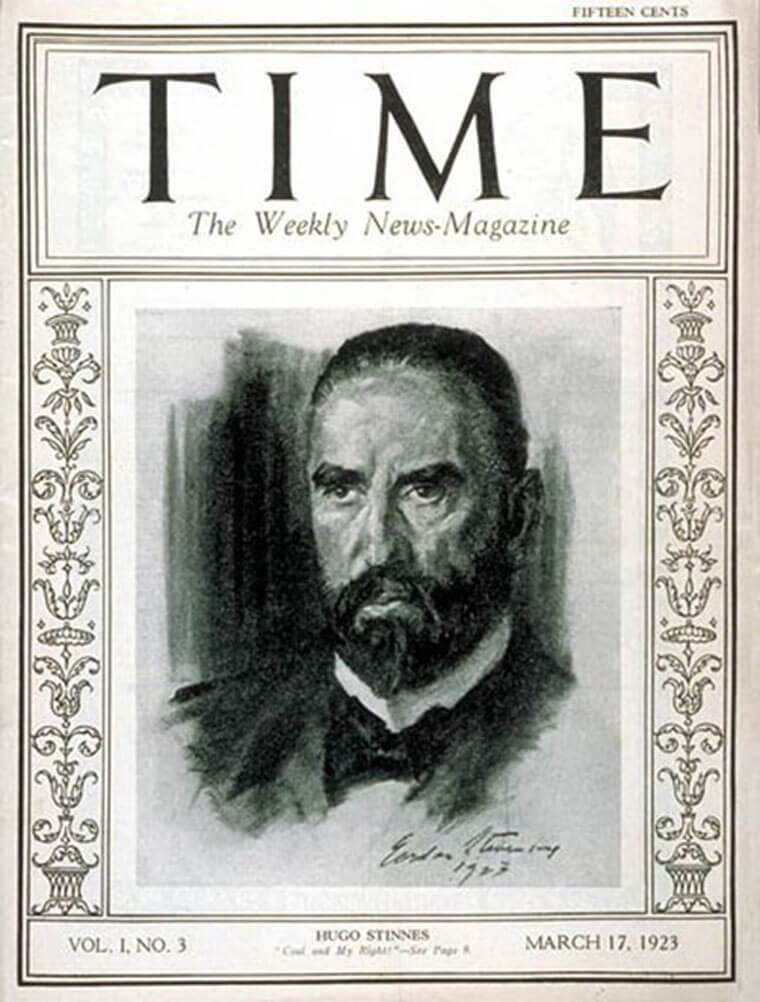 Fast forward to today and inflation is still ticking higher. As we write, the official inflation figure is 7.9%. It’s the highest reading in 40 years.

Everywhere you look, prices are hitting where it hurts the most.

We Can Beat Inflation

As the old saying goes, history doesn’t repeat… but it does rhyme.

We’ve been on the inflation case for a while in these pages.

The bad news is, we don’t think our higher inflation days are over.

If the 7.9% inflation rate sticks, you’ll lose over 25% of the value of what’s in your checkbook in four years.

The good news is it’s never too late to protect your hard-earned dollars from withering away.

At Casey Research, we believe in hard assets.

So let’s keep looking at that theme… take a page out of the Inflation King’s book and buy hard assets that do well in the face of rising inflation.

How to Be an Inflation King (or Queen)

We’ve been preparing readers of our flagship Strategic Investor service for this very moment. And we’re doing it with assets you may not even realize are great ways to fight inflation.

On March 16, I told you about farmland and how it’s outperformed bonds… stocks… and gold over the past 20 years: 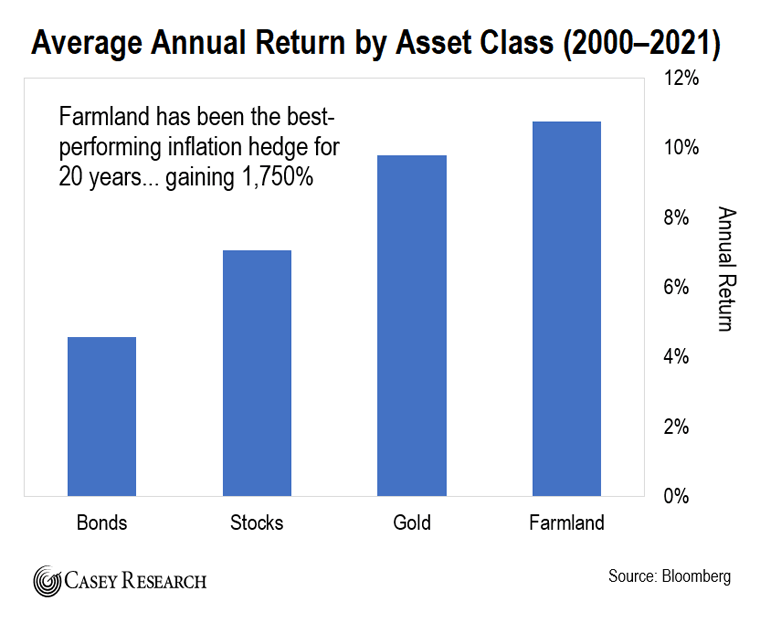 In fact, since 1992, farmland returned more than 1,750% in total. That easily beats gold’s return of 435%. And more importantly, the NCREIF Farmland Index hasn’t had a single down year for nearly 30 years.

Buying a Forest for the Trees

Money may not grow on trees, but when it comes to timberland, it’s pretty close.

That’s because according to data from NCREIF, timberland is one of the best-performing assets of the past 30 years. 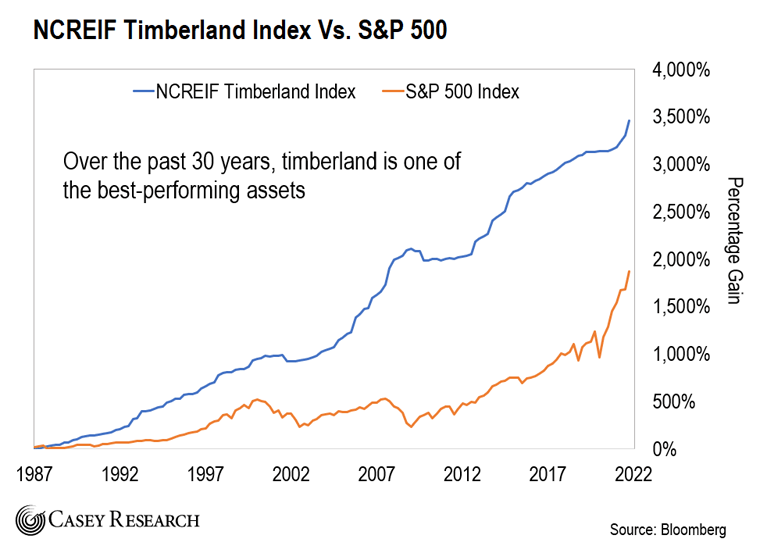 It’s easy to see why. Land tends to appreciate in value over time.

That alone makes it a great inflation killer.

But – like farmland – timberland has another valuable asset on that land…

And if you’ve done any home renovations… bought a house… or been to Home Depot lately, you’ve seen how expensive wood has become. 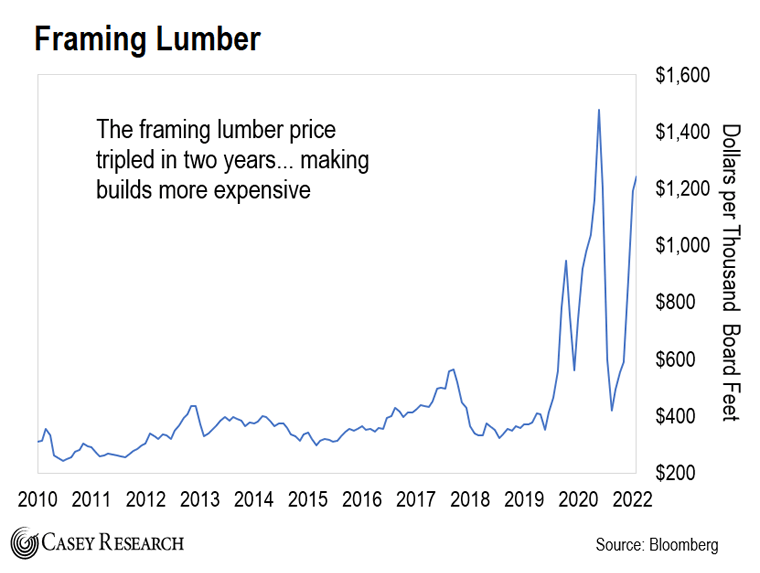 The chart above shows the price of framing lumber in the U.S.

Even before the recent spike to an all-time high, the price was steadily rising.

That adds a definite boost to timberland.

Time Is on Our Side

The great thing about owning timberland is time. Cut down a tree. Sell it. Plant a new one in its place. Wait. Repeat.

It’s why timberland is the ultimate renewable hard asset. It doesn’t deplete like an oil well. You don’t have to constantly search for a new source. Just plant more trees when the time comes.

It’s also the perfect example of what Warren Buffett calls an “economic moat.” You can’t replicate a timberland portfolio. So owning assets that no one can recreate is like building a moat around your house.

At the end of the day, so long as we need wood, timber companies will be there to supply it. And so long as inflation stays elevated, we need a way to protect our wealth.

However, buying a bunch of timberland… or a farm… isn’t practical for everyone. But the great news is, you don’t need to do that to play this trend.

In fact, my colleague Dave Forest recently put a presentation together to show you how.

At the end of the day, inflation can make a major dent in your wealth… if you let it.

Buy timberland… farmland… bury some gold, and you’ll have the best of both worlds protecting you and your family’s wealth.