I’d never seen anything like it before. So I decided to take a closer look.

I opened the glass case, pulled out the cash, and counted it. There were 20 notes – each valued at 100. Lucky me, right?

Not exactly. You see, the case wasn’t full of U.S. dollars, euros, or some other major currency. It was Venezuelan bolívars. See for yourself: 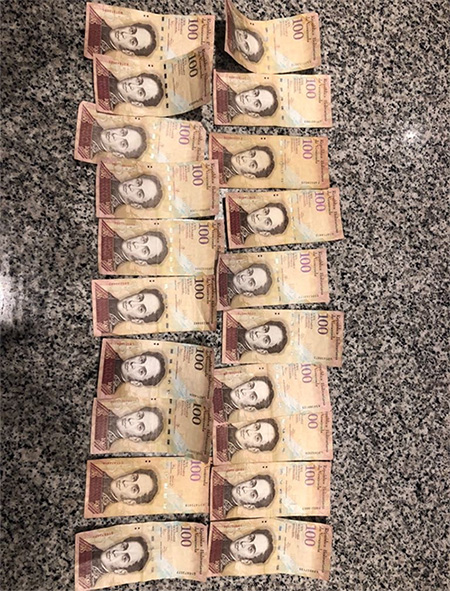 • I came across this while visiting Lima, Peru last summer…

My Airbnb host must have left the bolívars there as a decoration… or a joke. It certainly wasn’t a gift.

You see, this pile of cash was just about worthless. These 20 Venezuelan bolívars were only worth about US$0.02 at the time.

Regular readers might remember this story. I first told it last July.

I bring it up again because, believe it or not, those bolívars are worth even less today – just a fraction of a penny.

This has brought Venezuela to its knees. Food and medicine shortages have run rampant. Violent crime in the country has never been higher. People have resorted to eating from trash cans just to survive…

Of course, there’s a reason the country is in this mess.

• Venezuela went “all in” on socialism…

Its government nationalized many key industries, including oil assets – the country’s crown jewel.

It used these proceeds to fund a giant welfare state. But overspending on these social programs ultimately wrecked the country’s finances. That led the government to create more money out of thin air, which obviously only made matters worse.

I’m telling you this because the U.S. is headed down the same path as Venezuela.

Now, I’m not saying the U.S. will become a socialist hellhole overnight. But make no mistake… America’s descent into socialism is a trend in motion. And as Casey Research founder Doug Casey says, “trends in motion tend to stay in motion until they reach a crisis.”

The good news is that you can still protect yourself. I’ll show you how in today’s essay.

Capitalism is, of course, an economic system in which trade and industry are controlled by private owners for profit, rather than by the state. In other words, the economy is left to its own devices.

Now, I know America hasn’t had anything close to pure capitalism in decades… maybe longer.

Still, even America’s watered-down version of capitalism is far superior than what most countries have.

In fact, it’s why the U.S. became the world’s greatest economic superpower. It’s also why many people around the world see America as the land of opportunity.

But those days are likely coming to an end.

That represents a 12% decline in the last two years. It’s also worth noting that 68% of young Americans viewed capitalism positively in 2010.

And I’ll bet this number will be much lower when Gallup conducts its next survey. After all, there are almost no defenders of capitalism left.

There’s almost nobody to defend the ideas that have brought us Western Civilization. And – with the exception of a few anomalies like Taoism, yoga, and Oriental cooking – it’s responsible for about everything that’s good in the world. Without it the whole world would resemble Africa, or Cambodia, or Mongolia – not even today, but 200 years ago. Western ideas are things like individualism, freedom of thought, freedom of speech, science, rationality, and capitalism. These concepts no longer have any defenders anywhere. They’re under attack everywhere.

• Just look at what’s happened to the Democratic Party lately…

It’s gone all in on socialism.

And Alexandria Ocasio-Cortez (AOC) is a big reason why.

AOC, as you probably know, is a freshman congresswoman from New York.

A little over a year ago, she was bartending in the Bronx. So you wouldn’t think she’d have much influence. But she became the face of the Democratic Party almost overnight.

I say “extreme” because AOC is basically promising “free everything.”

She wants free Medicare for all. She wants college education to be free. She wants to cancel student debt, hike the minimum wage to $15, and she wants to replace oil and gas with green energy by 2030.

Now, this all sounds great in theory. I mean, who doesn’t love free stuff?

It’s now more than $22 trillion in debt… and that number grows by the second.

Call me old-fashioned, but that’s a big problem. I’d say that reason alone is why Americans can’t have “free everything.” There’s no way the country can pay for all of these ideas.

But new Democratic socialists like AOC and Bernie Sanders see things differently. They don’t see the out-of-control national debt as a problem.

They think the U.S. can just print its way out of this mess. I say this because many on the left have come to embrace modern monetary theory (MMT).

If you read last Friday’s Conversations with Casey, you know MMT is a radical economic theory. It essentially argues that the U.S. government doesn’t need to collect taxes or borrow money to finance spending. It can simply print the money it needs.

If MMT sounds idiotic to you, you’re not alone. Doug weighs in…

It’s nothing new. Just a more radical version of the economic fascism that’s dominated the U.S. since at least the days of the New Deal. It’s just another name for an old, and very stupid, set of economic ideas. By stupid I mean, “showing an inability to predict the indirect and delayed consequences of actions”…

It will work about as well as the economic policies of Venezuela and Zimbabwe. Or Argentina, where I am at the moment. These schemes have never worked in all of history. They result in a vastly lower standard of living, along with social strife.

Doug’s absolutely correct. MMT is a recipe for disaster.

• If left unchecked, it could turn the U.S. into the next Venezuela…

Some people will think I’m crazy for saying this. But you can’t rule out that America’s next president will be a full-blown socialist. Doug again…

The chances of MMT being implemented are extremely high. It will almost certainly happen, at least after the next election, for several reasons.

One, the government is now running a deficit of roughly $100 billion a month; that will soon be $200 billion. They’ll be desperate for more revenue, which MMT will give them. Second, with demographics – the youth and non-white voters – as they are, the Democrats will get a lot more traction in 2020. Third, the U.S. will be in the midst of a gigantic crisis; it will be blamed on Trump, regardless of how much of it’s his fault. There are a number of other reasons the Democrats will win.

For example, Doug predicted that Trump would become president in April 2016… when most people were writing him off completely. He even bet 100 ounces of silver on the outcome, which he later claimed on stage at an investing conference.

In short, I suggest you prepare for the rise of socialism in America before it’s too late.

One way to do this is by owning physical gold.

As regular readers know, gold is sound money. It’s survived every financial crisis throughout history. When the Fed’s runaway money-printing takes hold, gold will keep your wealth safe. Its value could even explode in the coming years.

• I also encourage you to sign up for our landmark event on Wednesday, March 27 at 8 p.m. ET…

For the first time in decades, Doug Casey will take part in a live interview where he’ll reveal five stunning predictions for the fate of the U.S. We’re calling it Totally Incorrect: LIVE, and it will prove to be one of the most important events in our firm’s history.

Anybody looking to avoid the devastating effects of the coming wave of socialism in the U.S. will want to tune in – and listen closely.

Better yet, Doug will show exactly how you can protect yourself, and profit, in the coming crisis. You don’t want to miss this… Sign up for free right here.

P.S. Fair warning: this upcoming event is highly controversial. You see, it’s been almost 39 years since Doug’s sat down in front of a camera for such a wide-ranging, incisive interview. (The last time was in 1980 on The Phil Donahue Show… when he was telling everyone in the audience why they shouldn’t vote.) It caused quite the stir… but it doesn’t compare to what he’s going to say during next week’s landmark event.

Make sure you’re there to catch every word.

This so-called socialism isn’t new. None of the advocates have gone as far to the left as FDR did in getting us out of the Great Depression, and I am proud to say that I had the luxury of growing up in the near-perfect world of FDR. You need to refresh your memory of history.

And another agrees with us, and says what he thinks is causing the problems in the world…

I find your take very close to mine on a lot of issues; with my limited understanding of “high finance,” being only a lowly health care provider. To the point: we are going to see a lot more of AOC and her ilk. I think many more candidates will come from this direction. People have been indoctrinated (brainwashed) to want things for free, without any thought of who is going to pay for it. Certainly, our schools never mention or teach accountability. My real question is: Why haven’t you and other commentators come down against the crime of fractional reserve banking? I mean long and loud, fire and brimstone. It really is the underlying cause of the problems in the world.

I have been meaning to reply to your requests for a while. I am really happy with my Crisis Investing subscription. Just to let you know, my three largest marijuana profits currently sit above $8,000. This is not counting the profits we already took. Something like $2000-3000, I think. I really appreciate all the free upgrades you guys threw in. I have always kind of been a gold bug also, which also fits really well with Casey Research. I only wish I had listened to yours, Doug’s, and E.B. Tucker’s prediction about Bitcoin being a mania and probably going down back in late 2018. If cryptos come back significantly, gold takes off, and your marijuana/crisis stuff keeps going I will be sitting pretty.

P.S. I really enjoyed Doug’s Speculator book and am currently reading Drug Lord. They are great books and I appreciate Doug’s wisdom and knowledge imparted in them. Thanks for everything and all the Casey team’s hard work.

Thanks for your kind words, Ron. We’re always happy to hear that the work we do is appreciated. Keep your thoughts coming at [email protected].