Rachel’s note: One of our themes at Casey Research is to buy when there’s blood in the streets. It’s how we take advantage of a crisis… and turn fear into profit.

And our colleague, Teeka Tiwari, recently found a rare opportunity. It allows ordinary folks to take advantage of this “fear curve” shaking investors. And could deliver 39 years’ worth of gains – in just 28 days.

Teeka calls it an “Anomaly Window.” And it’s one of the most unusual discoveries he’s made in his entire career. That’s why last week, he held an urgent presentation… and revealed exactly what you should do before this window closes.

Just go right here to watch the replay. And learn how this secret could bring you wealth beyond your wildest dreams…

I once had a loaded gun pulled on me. (Actually, six guns were drawn. I’ll explain more later.)

When you’re staring down the barrel of a gun, all rational thought goes out the window. All you’re thinking is: “How do I survive this?”

It was when a stock I owned got crushed lower. I’m always shocked at how similar those feelings are. As far as my “reptile” brain is concerned, imminent death and financial ruin are the same.

Of course, they’re not the same… But when the spaghetti hits the fan, my rational brain can stop working.

I think that’s true for a lot of folks.

It’s easy to say: “Buy when there is blood on the streets… ” But what do you do when it’s your blood?

Easy to say… but tough to do.

I think that’s why most folks rarely buy on stock market weakness.

The “reptile” brain takes over and the only thought is “survive.” I saw this same pattern repeat itself when I worked on Wall Street.

I managed retail money across three different decades and would see investors make the same mistake of selling at the absolute worst time.

I can’t blame them.

We’re wired to “overvalue” fear. This works well for most other areas of our lives… But it’s a horrible strategy for making money in stocks.

To be a consistent winner in the stock game, you need to do the exact opposite of what your brain is telling you.

You have to buy on fear, uncertainty, and doubt. And you have to sell on euphoria, confidence, and good news.

I call this the Fear/Greed cycle. This is how it works for most people… 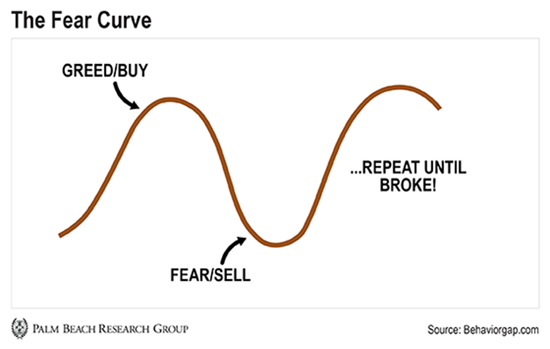 Many investors buy on greed when everyone is upbeat about an idea.

That should be your first tip-off that something is wrong. It’s a sure sign you’re on the wrong side of the curve if buying a stock is “easy” or a “no-brainer.”

It’s counterintuitive… but the trades that I’ve sweated on the most have given me my biggest returns.

For instance, in February – as the coronavirus pandemic began to spread across the United States – panic started to rip through the markets.

By March, the S&P 500 had plunged 34%. It was the biggest crash since the Great Recession.

Intellectually, I knew stocks would survive and thrive… but like many other investors, I was still terrified.

I took a deep breath and realized we were at the bottom of the fear curve. The news couldn’t get any worse… and so I recommended you buy stocks.

I also told you to buy gold and bitcoin during their sell-offs earlier this year. I said don’t sweat the volatility… And counseled using the pullback as a buying opportunity.

Since that article was published, bitcoin has been as up as much as 78% and gold has risen as much as 25%.

Here’s the key takeaway: I’ve learned to buy assets in which investor sentiment is low… but the quality of the ideas is very high.

That’s when you can buy great assets at fantastic prices. And in the long run, you’ll do well. Like I mentioned above, just buying SPY would’ve netted you a 58% return in just six months.

But here’s why I’m writing to you today… I’ve found a way you can use the same “fear curve” to make even bigger gains in a fraction of the time it normally takes.

This year has been rough. In the first 12 weeks of 2020, over 40 million people lost their jobs. At the same time, we’ve seen the billionaires collectively grow a half-trillion dollars richer.

How are they doing this?

But there’s a way for you to turn the tables on Wall Street. It involves a rare “Anomaly Window” that occurs every few years. When I first discovered this window, I thought it was just random. But I’ve since discovered proof that it’s linked to a predictable date.

During this window, there is an enormous amount of uncertainty. So you can put the Fear/Greed cycle to work in your favor… and potentially make double-digit, triple-digit, and in rare instances, quadruple-digit gains in a few days or weeks.

What’s special about this “Anomaly Window” is that while this window is open, you can make these types of gains from certain blue-chip stocks.

Inside this “Anomaly Window,” the rules of wealth-building change.

The uncertainty turns boring, stalwart companies into some of the most profitable stocks in the market. Banks, airlines, and even mining companies that spend years trading sideways suddenly offer investors outsized returns.

Look, it’s no secret the rich are getting richer beyond most people’s wildest dreams. The secret, though, is how they’re doing it.

And last week, I pulled back the curtain on this “Anomaly Window”… and showed how during this period, you could’ve made huge gains on blue-chip stocks, like 472% on Citigroup, 882% on United, and 614% on mining company Newmont.

To make sure it’s worth your while, I even gave you my entire list of 30 elite stocks to trade during this window.

All you have to do is go here to watch my urgent presentation.

P.S. Remember my story about staring down the barrel of a gun?

I had six NYPD cops draw their guns on me on Lexington Avenue in New York City in the early 1990s. It was a matter of mistaken identity. Apparently, I looked a lot like a guy the cops were after.

I think the cops were as scared as I was. We all laughed about it afterwards… but in the moment, it was quite terrifying.