Over the last couple of days, however, gold’s slipped back a bit. As of writing, it’s 6% off its all-time high. 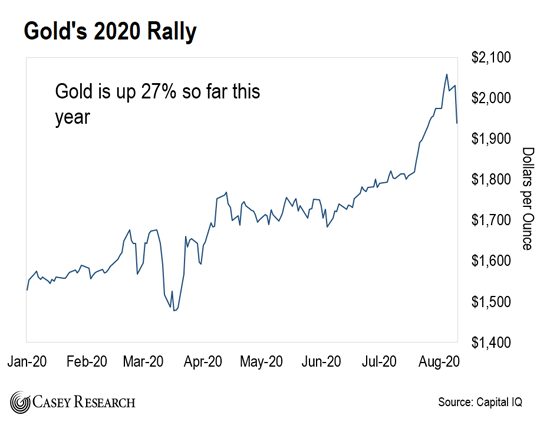 Is this the end of the gold bull market?

Of course not. Gold’s risen so high so fast that a brief pullback was inevitable. Meanwhile, the fundamental catalysts that took gold to new heights are still in play.

I said recently that gold could reach $2,200 by the end of this year.

Gold works best during a crisis. In fact, our precious metals expert Dave Forest says, “Gold is the safest place to be in uncertain times – having a history of holding value well and delivering solid gains.”

And I believe the COVID-19 crisis won’t go away until 2022 at the earliest. In short, the world just isn’t equipped to deal with a crisis of this magnitude.

Much has been made of “flattening the curve.” The idea is to spread out the number of infections over time to avoid overwhelming hospitals.

While some countries have achieved this, if you look at the whole world, the curve hasn’t been flattened at all. The number of total global cases is still rising. 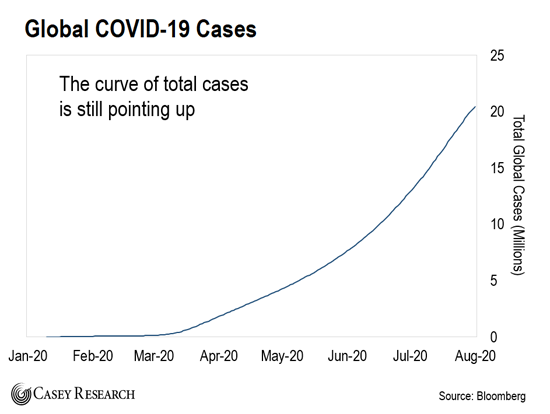 Some scientists say this virus won’t be under control until a vaccine is produced… and we find a way to vaccinate all 8 billion people on Earth. This is why I don’t see the crisis ending this year… and possibly lasting through the next.

This will have wide-ranging consequences on the global economy that will take years to deal with. And it will drive investor behavior for years to come… pushing them toward gold.

All of this strain on the economy is spreading into other markets… such as Treasury bonds.

Gold tends to move in the opposite direction of interest rates on Treasury bonds. Higher rates are bad for gold, and lower ones are good.

The relationship works like this because investors who seek safety look at both gold and bonds. Higher interest rates attract people toward Treasury bonds, which pay interest, and away from gold, which doesn’t pay interest. But with low or negative rates, gold starts to become more attractive.

In August, the 10-year real interest rate (meaning the interest rate after taking inflation into account) went below -1% in the United States. That low rate is pushing more investors toward gold, adding more strength to this rally. 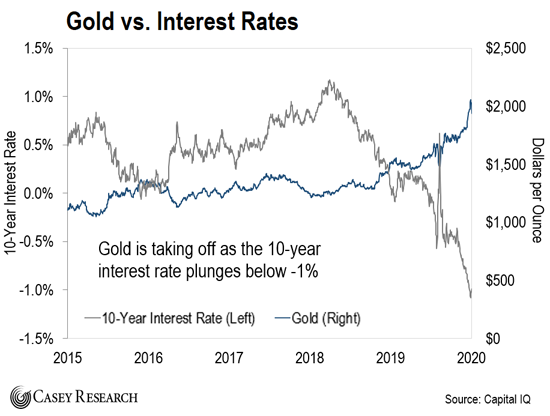 As the COVID crisis drags on, interest rates will either stay low or go down even more, thanks to the Federal Reserve.

While the Fed doesn’t set these rates, its own federal funds rate has a huge influence on them. And Fed officials said that a fed funds rate hike isn’t likely until 2022. The U.S. economic recovery is too fragile, and higher interest rates will undo the help it got from the stimulus so far.

To keep stimulating the economy, the government will keep borrowing money. So it needs to push the interest rates down as much as possible.

This will have an effect on another one of gold’s rivals: the U.S. dollar.

Even if investors decide to park their savings in cash, it will still pose some risk. Low interest rates also drag down the dollar.

You see, currencies go up in value when the countries that issue them pay high interest rates.

That’s because investors seek the highest return on their capital, so currencies in countries that pay a high interest enjoy high demand.

And when the dollar’s monetary value goes down, gold stands out as an alternative. 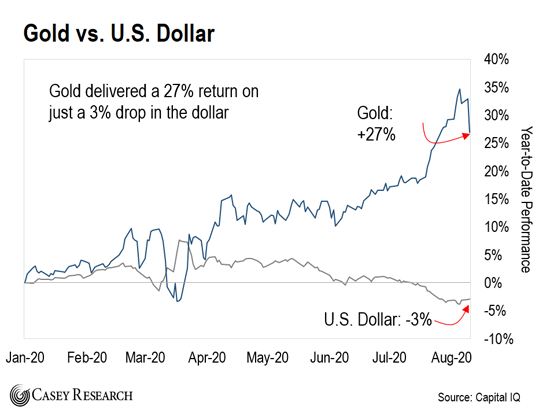 Putting It All Together

Gold performs best in difficult times. And this crisis is powering gold toward a historic era.

Take it from Crisis Investing chief analyst Nick Giambruno. Nick’s traveled to dozens of countries and profited from numerous crises. Here’s his outlook on gold as this crisis drags on:

This gold bull is not going to be like previous ones.

I’m not talking about a garden-variety cyclical gold bull market, but the BIGGEST gold mania in history. And it’s already well underway.

As always, we recommend first holding physical gold to protect your wealth as well as profit from this market. If you’re looking for a little more exposure, take a look at the SPDR Gold Trust (GLD). It’s an exchange-traded fund that has plenty of liquidity and gives exposure to the price of gold.

Just remember to position size appropriately. And never bet your entire savings on a single trade.

P.S. For the feds, this pandemic is the green light they were looking for to start cracking down on the wealth of ordinary Americans…

My colleague, Nick Giambruno, has found a sinister plan hidden in a pandemic stimulus bill that would confiscate everyday Americans’ wealth… and even ban those who don’t comply.

Simply put, it’s an attack on your hard-earned savings. Nick put together this urgent briefing to show you how you can protect yourself from this ruthless cash grab. Just go right here to watch it now.