Not copper… Not aluminum… Not iron.

Copper is for pipes and wiring. Aluminum for cans and window frames. Iron is for bridges and buildings.

Even silver is for electronics…

But there’s one metal that is just a metal. Though some people would have you think just being a metal isn’t good enough.

According to them, it has to “do” something. Of course, it already does something.

Today, we’ll look at the bizarre obsession that some folks have with gold. And no, we’re not talking about the “gold bugs.” Instead, we’re talking about the folks on the other side. Those who stone-cold fail to understand gold…

No, It Didn’t Cause the Great Depression

We admit that gold is polarizing… but only when it comes to its use as money or as an investment.

That’s when the anti-gold folks turn to Warren Buffett’s comment about spending millions to dig it from the ground, only to then put it back in the ground in a vault.

Say to these folks that gold is an investment or money, and all sense disappears from their minds. Usually, their first response is to say, “But it doesn’t do anything.”

We’ve often asked them what they expect it to do. Circus tricks or recite poetry, perhaps?

After some hemming and hawing, the next argument is that it doesn’t pay a dividend… to which we agree. We then add that if dividends are important to them, they should buy dividend stocks.

You would think that would be the end of it. But they persist. That’s when they use their trump card: that gold (or rather, the gold standard) caused the Great Depression.

We explain that the cause of the Great Depression was, in part, the Roaring ’20s that preceded it.

Besides, gold can’t cause anything. Because it doesn’t “do” anything. It’s a “do nothing” metal. The causes are the actions of governments and central bankers. Those who manipulate economies and money as they try to create booms and delay busts.

Defense Against the Meddlers

What does change are the investors’ perceptions of its worth – a point that colleague and investing expert Nick Giambruno explained perfectly in a recent essay:

One of the first – and most important – things free-market Austrian economics teaches is that all value is subjective.

There is no such thing as inherent or intrinsic value.

Something only has value because individuals subjectively determine it does.

For example, when people didn’t understand what crude oil was, they’d find it in their backyards and think it was waste. They’d pay to have it removed from their property.

Later, once people understood the economic potential of crude oil, it was transformed from unwanted waste into a lucrative commodity.

The oil didn’t change; it was still the same oil. What changed was how people valued it.

That’s the same with gold.

Gold’s value depends on what people are willing to pay to buy it and hold it.

But regardless of the perceived price, and whether someone chooses to buy or sell, the gold itself has stayed the same.

No Better Reason to Own “Do Nothing” Gold

How do we know that it’s all about the perceived value? The price action on the charts tells us so. For most of the past year, investors have shunned gold. So, the price has fallen. See the chart below. 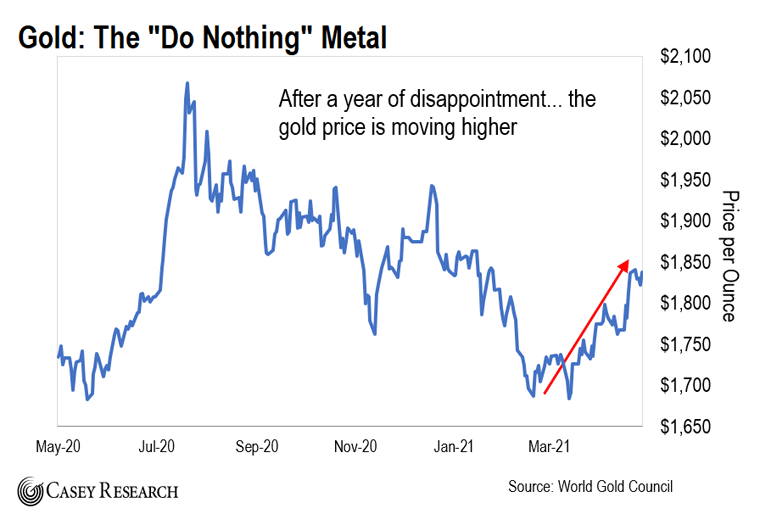 But look. In recent weeks, the price has started moving higher. Not by much, but enough to notice.

So what does it tell us? Does it actually tell us anything at all?

In which case, the only thing that must have changed is its perceived value. A growing number of investors must figure that owning a piece of “do-nothing” gold is a better bet than owning something else… perhaps U.S. dollars.

After all, governments and the Federal Reserve manipulate the perceived value of dollar bills, too.

It’s just that over the long term, the manipulation causes the value of the dollar to fall… while the value of gold goes up.

The Fed’s own data admits that. Its Purchasing Power of the Consumer Dollar index shows that in the last 15 years, the value of the dollar has fallen 26% (from an index level of 50.4 to 37.4).

That is why we can’t think of a better reason to own “do-nothing” gold.

P.S. There are lots of ways to get exposure to the “do nothing” metal… physical coins… ETFs… and gold stocks. But colleague and professional geologist Dave Forest may have found the best way – check it out here.