The day we published our prediction series last year in Strategic Investor (current subscribers can review it here), WTI crude oil closed at $58.46 per barrel. We called it higher in 2021, based on a weakening dollar and resilient global demand.

We were very wrong.

Then all hell broke loose. With lockdown orders coming, crude plunged to $20 per barrel. Futures even briefly reached negative prices, hitting a stunning -$36.98 on April 20.

That distortion aside, prices bottomed around $15 per barrel in late April. The last time oil traded at $15, Bill Clinton was in office and Harvey Weinstein won an Oscar for producing Shakespeare in Love.

But it didn’t take investors long to realize oil wasn’t disappearing. By June, WTI was back above $40. It’s held there throughout the second half of 2020.

It wasn’t just COVID that crude investors worried about. Another threat to oil markets emerged in latter 2020: Joe Biden.

Biden was adamantly anti-petroleum during election campaigning. He pledged to move America away from oil and gas. He announced plans to spend trillions (which is why you should buy gold!) on clean energy like renewables and possibly nuclear.

His rhetoric weighed on natural gas prices, as well as oil. We didn’t make a prediction for natural gas last year – but we never would have seen it trading at $1.41 per MMBtu (one million British Thermal Units) on October 2.

That’s wintertime, when gas demand and prices usually take off. But with election day approaching, everyone dumped natural gas. The $1.41 price was the lowest daily close since December 1, 1998.

Then came another huge surprise: Biden won, and natural gas prices surged. During election week, natural gas topped $3. That was its highest level in over 18 months.

Oil and gas stocks also enjoyed a massive rally after Biden’s win. The S&P/TSX Capped Energy Index gained 17% in a single day on November 9. That’s an insane move for a big index.

Investors realized Biden’s tough talk on oil and gas might have been just vote-grabbing. His track record tells a much different story. As vice president, he approved all six of America’s currently operating export terminals for liquefied natural gas.

He might even be better than President Trump when it comes to gas exports. If Biden manages to heal the trade war with China, it opens a massive market for U.S. gas shipments.

In short, 2020 was a year of huge energy surprises.

I think that’s going to continue in 2021. But the surprises will be to the upside. 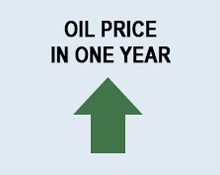 All the money-printing in the wake of COVID is good for hard assets. Gold and precious metals spiked first. But base metals like copper and nickel quickly followed.

Oil and gas are also hard assets. They’re going to lift from inflation as all the new cash sloshes around the economy.

Crude will have headwinds. Many investors are dumping oil for perceived ethical reasons. Demand might also remain subdued by COVID, especially in the first half of 2021.

But financial stimulus will lift crude by year-end. I don’t think the gains will be massive, but I see WTI closing out 2021 at $50 to $60 per barrel.

Natural gas might have bigger surprises in store. Even with the big rally last month, the current natural gas price of around $3 is still near its lowest level in 20 years.

There’s a lot of gas in storage around the U.S. right now. That’s negative for prices. But exports of liquefied natural gas by ship, as well as pipeline exports to Mexico, are both rising.

If Biden does clamp down on fracking, gas supply will be reduced. All of these things could cause a surprise spike in the natural gas price. I have a suspicion that 2021 will see gas top $5 for the first time since 2017.

Natural gas prices are seasonal, so any moves up won’t last that long. But they’ll create big lifts in gas stocks when they happen. The gains are going to be fast and furious.

All of that will create some big opportunities in oil and gas stocks. Even with the massive November rebound, these companies are incredibly beaten up. The trick will be picking ones that can survive long enough to enjoy a recovery.

Other parts of the energy sector are going to be even more exciting in 2021. We’re going to hear a huge amount about green energy.

Biden and the Democrats love green energy. It’s one of the few politically correct businesses. Increasingly socialist millennial voters inherently hate most companies (including the ones they buy from daily).

But throw a “green” in front of it, and it’s okay to talk about jobs and profits.

America needs industry to underpin its economic recovery. Oil and gas did that in the wake of 2008 (under Biden and Obama). As president, Biden will spin green energy as an economic and environmental savior.

Will it help the environment? Maybe. Will it make economic sense? Hard to tell. But one thing is for sure: if the government pumps trillions into the sector, it’ll be great for stock investors.

This has all the makings of a mania. The prospect of an unlimited checkbook from Uncle Sam will boost clean energy stocks to valuations that are ridiculous by any conventional business metrics.

Watch for it in solar companies, electric vehicle makers, battery companies – and the mining firms that supply critical metals to these industries. Lithium, rare earths, vanadium, nickel, cobalt, copper, manganese, and graphite will all get their time in the sun.

It’s going to be volatile. These tiny subsectors usually rocket upward, then plummet downward. But played right, they yield some of the biggest and quickest gains in the stock market.

As a final note on energy, keep an eye on uranium. Last month, the Senate Appropriations Committee approved $150 million to buy U.S. yellowcake for a strategic uranium stockpile. U.S. uranium stocks jumped on the news.

It’s unclear what role nuclear power might play in Biden’s clean energy plans. But there are good arguments for nuclear power as a low-carbon solution. Support from the new government would send uranium and nuclear stocks higher, along with the rest of the new green wave.

Rachel’s note: In the next installment of our prediction series, due to hit your inbox tomorrow, Dave reveals the grand plan in store for the U.S. dollar… and how that’ll affect its value in the year ahead…