Electric vehicles (EVs) are the biggest moneymaking opportunity of the 21st century.

This chart says it all. The explosion coming in EVs is unlike anything we’ve seen… 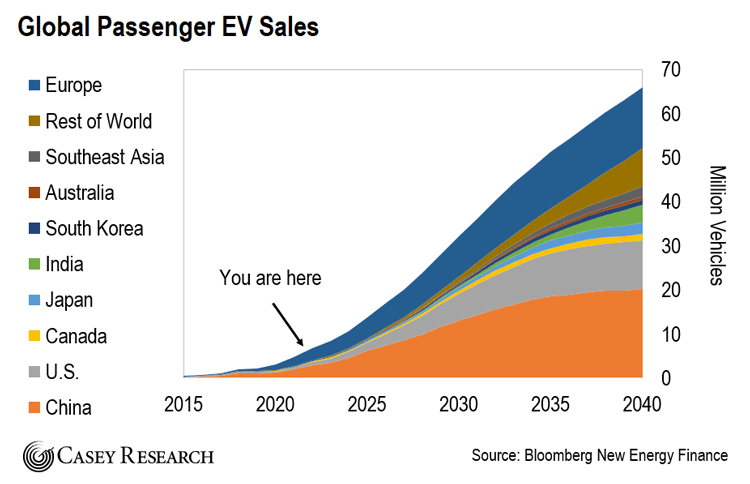 But EV makers like Tesla were just the opening act.

Think back to the automobile revolution in the 1920s…

Back then, automakers like Ford certainly cashed in. By 1930, car sales across America surged from zero to nearly 30 million units.

But carmakers were just a small part. The spin-off businesses created the biggest profits.

Demand for tires skyrocketed. Dunlop and Goodyear ballooned from nowhere. Raw rubber itself vaulted to a $30 billion global industry.

How about gas stations? That’s another $2 trillion sector born from scratch.

Road construction surged to $124 billion yearly. Over 60,000 service stations popped up in just a few years.

Steel and oil took off. Those businesses are worth $100 billion and $7.4 trillion today.

The impact of the auto boom runs even deeper. Roadside motels transformed the hospitality industry. That sector is worth another $570 billion.

There’s even more. Historians credit the auto boom with creating fast food. Drivers wanted quick meals so they could be on their way.

That’s why I’m so excited about the rise of EVs. It’s a universe of profit opportunities.

Most investors know about EV manufacturers. We’ve all heard of Tesla.

But few investors know about the universe of EV spin-offs.

The EV Universe Is Coming

Put it all together, and it looks more like this… 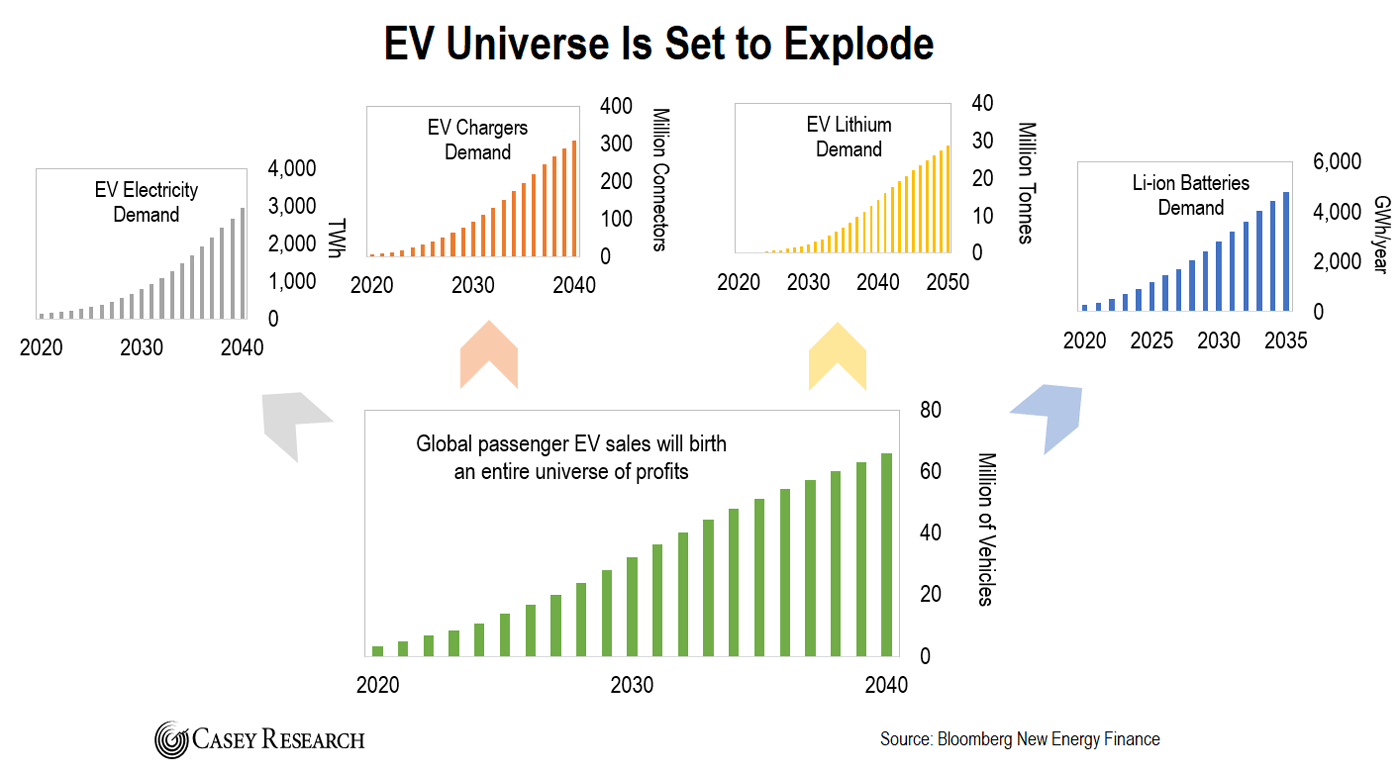 It’s a universe of profits. No other trend hits so many different businesses.

Driving is woven into the fabric of our society. We’ve had a century building our world around the car, the highway, and their roadside attractions.

Fortunes were made in the ’20s. The whole continent was up for grabs.

Then, America’s interstate highways launched in the 1950s. That massive boom continued until 1992 when the interstate’s construction was completed.

By then, auto profits divvied up.

These giants stayed on top for decades. Today, they’re the icons of American road culture.

We haven’t seen a profit universe like this since then.

The rise of the internet in the 1990s got close.

But that wasn’t physical. It didn’t capture so many different businesses the way driving does.

That’s what’s so exciting about EVs…

This revolution hits all the industries autos did 100 years ago.

But it goes beyond. It connects high-tech and real-world infrastructure.

EVs are roving computers. They’re collecting, using, and passing on terabytes of data.

It’s a profit universe beyond most investors’ wildest dreams.

What You Need to Do

Are you ready for restaurant chains geared to EV charging stations? They’ll have a captive audience of millions.

How about asphalt that charges your car as you drive? That’s not science fiction. It’s coming soon to your highways.

By combining two massive trends – infrastructure and technology – EVs create an unparalleled profit universe. There’s nothing else like it.

But whatever you do, don’t ignore this. You owe it to yourself – to your children and maybe to generations beyond – to at least consider this trillion-dollar opportunity.

To prepare you for a huge event – the EV Superboom Summit.

I’ll detail this universe of profits… and the best way to get into it on Wednesday, March 2 at 8 p.m. ET.

This might be your last chance in 100 years to position for a massive trend… profit plays you haven’t even thought of yet. You don’t want to miss out.